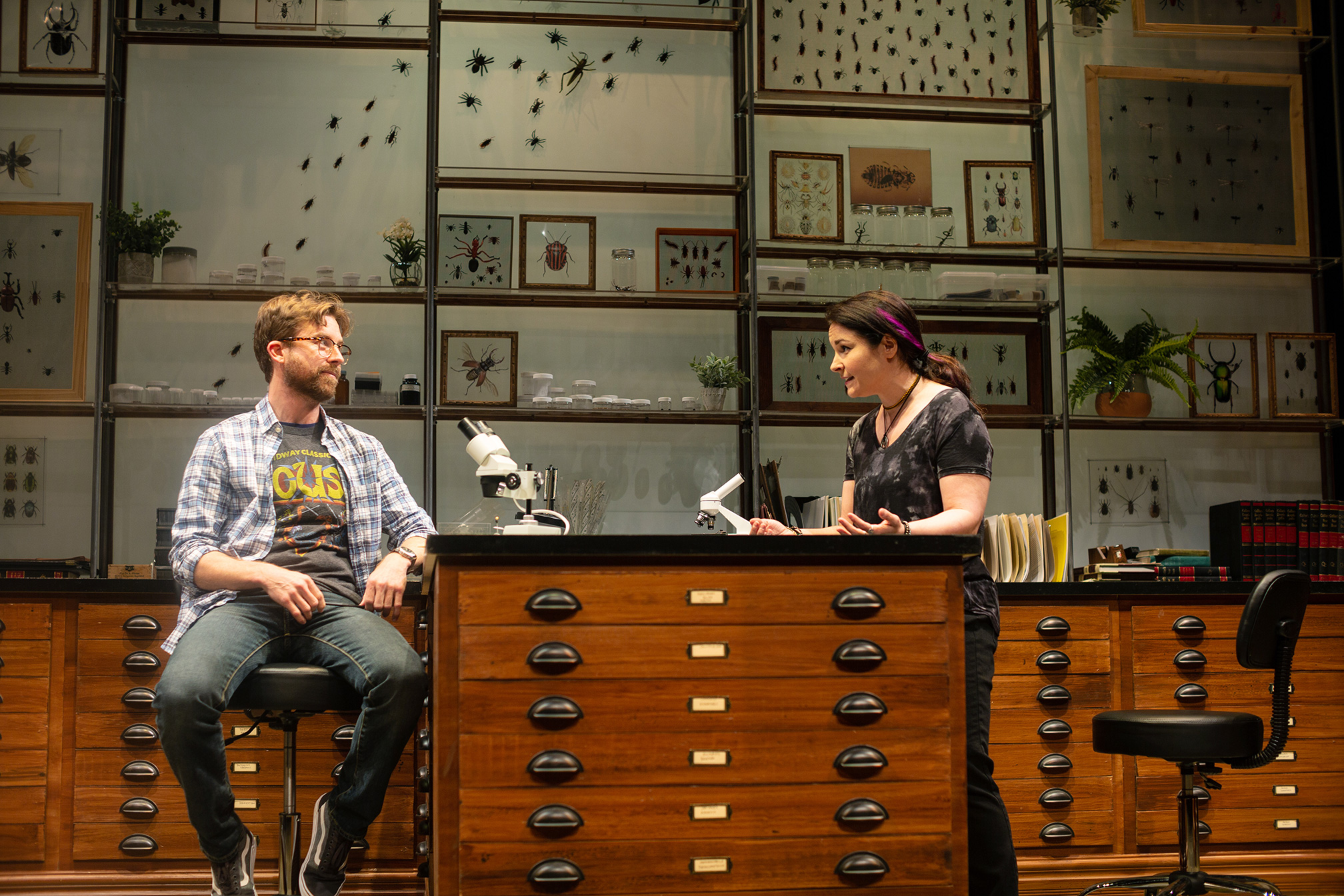 “An Entomologist’s Love Story” by Melissa Ross pits the feminist woman against the traditional woman in today’s Dating Wars. As Betty, Lori Prince changes her voice from deep and raunchy to light and airy, while she lectures on the mating rituals of fireflies.

Betty, the entomologist, explains how the female firefly of Species A imitates the mating signal of Species B.  When the B male flies over, she gobbles him up for lunch!

Betty (energetic Lori Prince) and Jeff (animated Lucas Verbrugghe) work together in the  entomology lab at The Museum of Natural History in New York. Scenic designer Nina Ball has gorgeously installed glass cases full of insect specimens from the floor to ceiling of her elegant laboratory setting: a sight not to be missed.

Ball covers the stage with the specimen cases and striking wooden cabinets, filled with marvelous moths, butterflies, and beetles. Her brilliant design shouts out: “Insects Rule!”  In the lab, Betty and Jeff play spider and fly, zooming around in flying wheeled chairs. They meet in the middle, mingling over their microscopes.

Lindsay, a pre-school teacher, plays hard to get. But Betty, a hardcore scientist, uses her pursuit of sex to hide out from emotion.  Lori Prince uses her voice like a cello, each word a note, but she curses like a sailor!

Betty believes she will never land a guy by exposing her rugged, assertive self and I empathize with her. When Museum custodian, Andy (smooth Will Springhorn, Jr.) asks Betty for her number on a park bench, she spazzes out.

Betty only gives out her digits via the net. She tries to intimidate him with brash words and crude manners, which only delights Andy.  The scene lacks urgency, until Betty awkwardly scurries away, leaving us with Andy’s funny face of failure.

Jeff  berates Betty for her fear of intimacy, calling her a “paranoid douchebag misogynist.”  For the first time, we pity poor defeated Betty, who slowly wheels herself back to her desk.

In the wild, the male of the species fights to win the female, but on the streets of New York, women must plot and scheme to win the male. She “dumbs herself down” in order to please the male.

Melissa Ross celebrates unique styles of womanhood. Trapped in a New York lab, like competing fireflies, we relish her scientific display of the new woman’s mating tactics. Ross celebrates life in its myriad forms and personalities.

Come and partake of “An Entomologist’s Love Story,” an up-to-date, current, and fine specimen of a smart, new style rom-com.