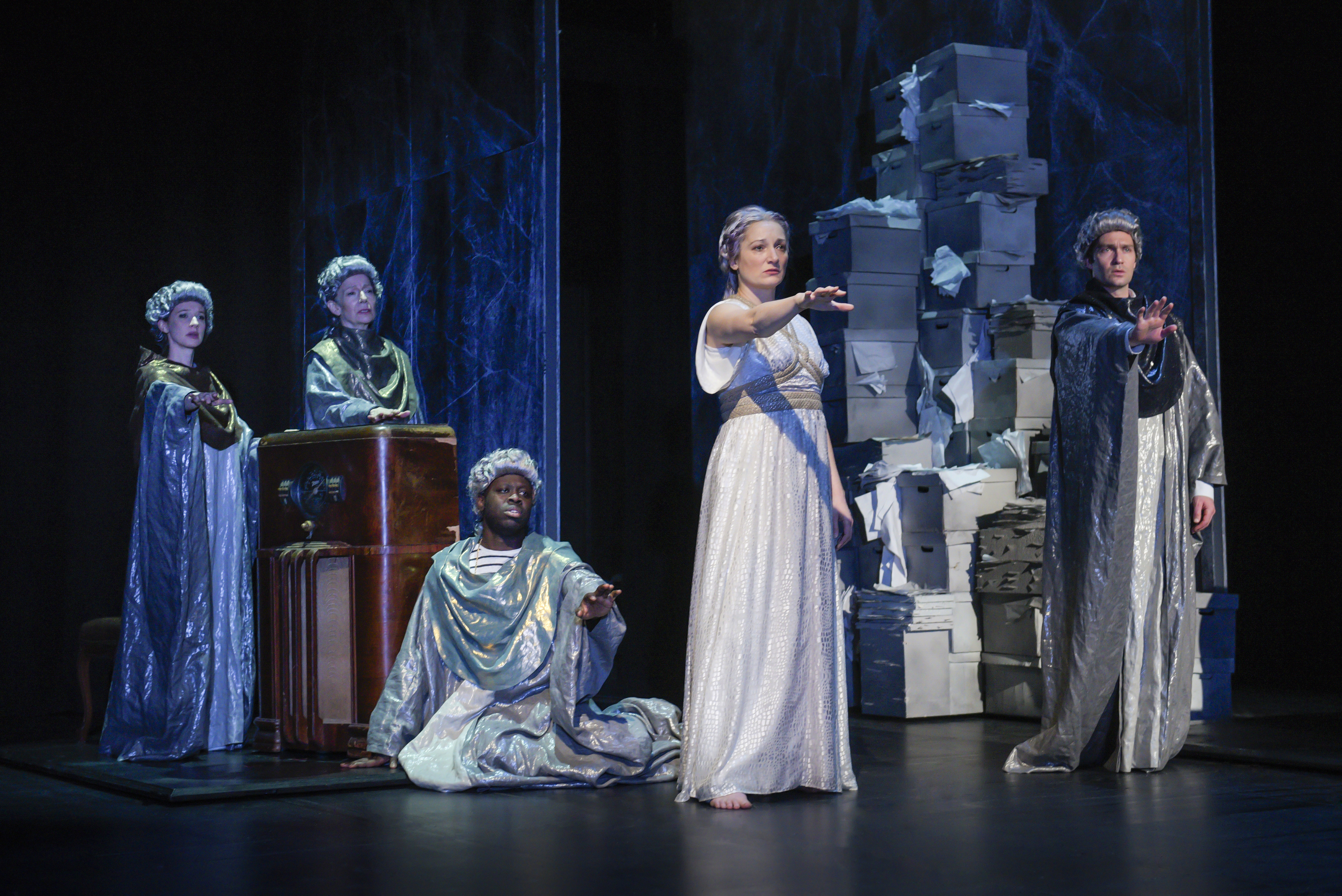 In “Perestroika,” Part Two of Angels in America, playwright Tony Kushner and director Tony Taccone take us on world-shaking, supernatural voyages.  Millennium has dawned and this time they fly us  to Heaven with Prior Walter and his seductive Angel. Prior (passionate Randy Harrison) discovers what’s wrong with the world and why he has AIDS. Prior learns the world is slowing down because God has retired–since the 1906 San Francisco earthquake.

The angels–funny, transfixed bureaucrats–stand around in Heaven despairing. Their magnificent gold and silver gowns glisten as they stand listlessly. We laugh as Angels listen raptly to an old fashioned wooden radio for scraps of the latest disasters from Earth.

Poor Prior, who climbs to Heaven up a neon-lighted ladder, carrying the prophetic Book, is stuck with the title “Prophet.” But Prior has a chance to reorganize the decadent Afterworld. Randy Harrison’s Prior wrestles with The Angel in the air, echoing Biblical stories, thrusting Angels into the future.

Back on earth, the real-life Roy Cohn (superb Stephen Spinella), is still squirming in his hospital bed. Cohn is angling for the experimental drug AZT from the Center for Disease Control–pulling strings inside the Reagan regime, calling Nancy Reagan on her 15 digit telephone number. The shocking debate between Cohn and his nurse, Belize (fabulous Caldwell Tidicue), echoes the U.S. public debate about disease and gay identity.

Belize stands up boldly for his brothers and sisters in the face of disgusting race-baiting from the foul-mouthed Cohn.  Spinella delivers another spellbinding performance as the most hateful lawyer on the planet. You must see Spinella’s Roy Cohn: a supernatural vision rising from Hell!

Part Two, “Perestroika,” Gorbachev’s word for the humanizing of the Russian system, starts with a stunning rant by “The Oldest Living Bolshevik” (masterful Carmen Roman), who must be at least 100 years old. Roman brilliantly portrays a cross-gendered version of a comical, fossilized revolutionary who will not change his mind.

Kushner gives us two funerals. In Part One, a cross-gendered rabbi (Roman) presides over a Jewish grandmother who came across the sea to America. Part Two begins with another comic funeral–for the outgoing Communist regime. The Old Bolshie also rants about the past and future, hilariously.

“Perestroika” depicts the multi-sexual struggle between Prior and his elusive Angel. She has multiple vaginas which she uses in battle.

Prior’s ex-lover Louis Ironson, smarting with his abandonment of Prior, deflects his pain by debating about Capitalism with Belize. In one of the greatest comic and philosophical scenes ever,  they dissect the Civil Rights Movement and racism/imperialism in the West, over coffee.

Cauldwell Tidicue as Belize delivers the goods as he slays Louis’ ideological dragons in an unforgettable scene of intellectual ardor and humane concerns. Louis’s mind is earthbound, while Belize rises with clear-sighted feelings.

When we go into the diorama room of the Mormon visitors center in Manhattan we find a spectacle within a spectacle. There Joe Pitt’s mother Hannah, fresh off the plane from Salt Lake City, is running the show. The extrodinary union of Harper’s Morman millennialism and Prior’s profound prophecies focus us on Now. Kushner slays the past and projects a fantastic future.

In the future we find Prior, Belize, Louis, and Hannah, gathered beneath the Angel of Bethesda fountain in Central Park. After many magnificent settings, with rain, snow, and now, a certain slant of winter light, they each step forth to tell their futures.

We are transfixed as we see the great puzzle of Angels transfigured. Who can resist shedding a tear–and laughing? “Perestroika” prevails, proving spectacularly that “The World Only Spins Forward.”

Part One reviewed: Angels: More Powerful than Ever!