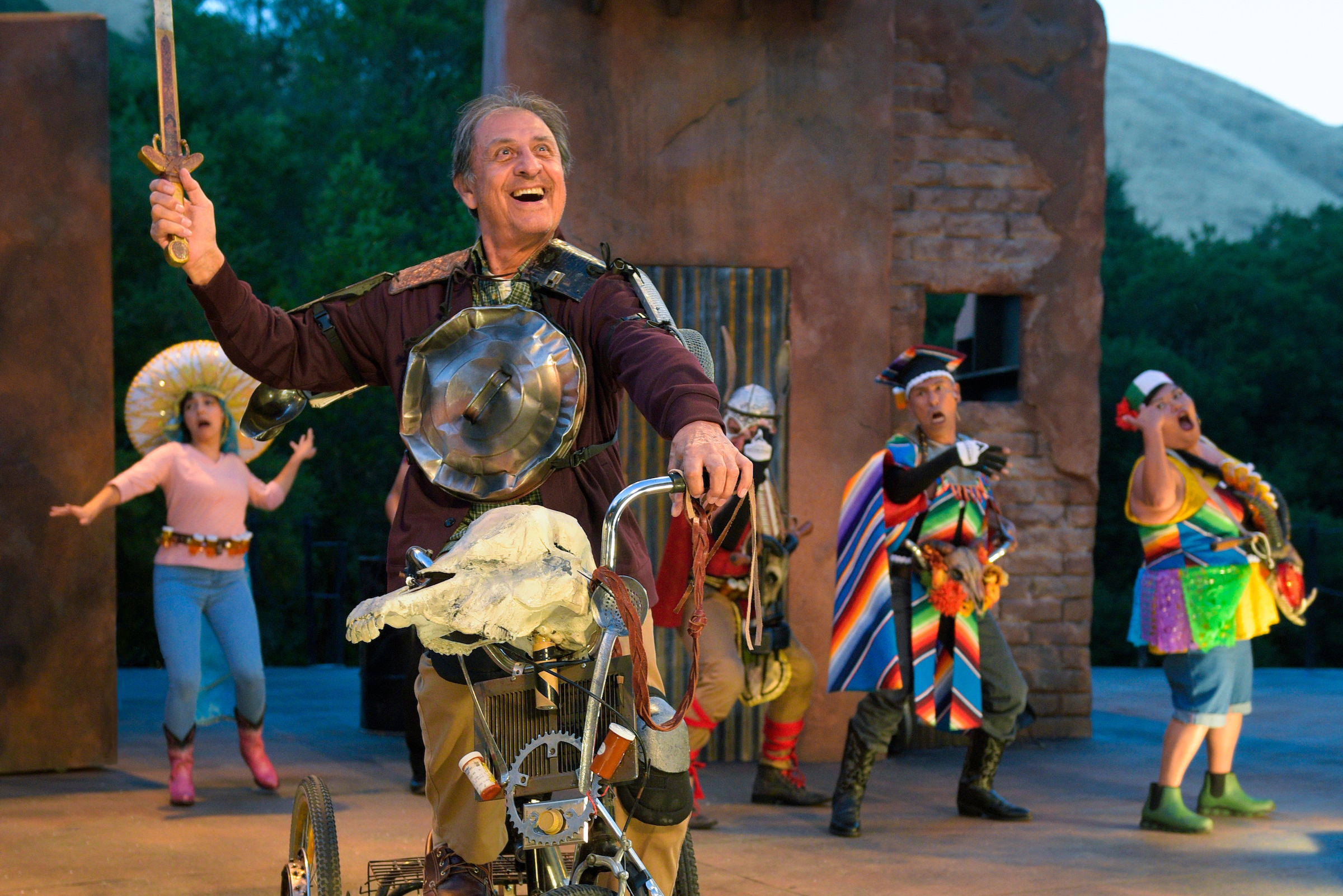 Playwright Octavio Solis has rejuvenated Don Quixote. Emilio Delgado plays Quixote as the classic knight errant we want to believe in. But where Quixote of the past has given in, “Quixote Nuevo” stands strong. He clings to his convictions till the end, wildly swinging his sword at the giant border wall separating him from the beauteous Dulcinea.

As the sun sets at Cal Shakes, Dulcinea becomes a living idol, embodied by Sarita Ocón with astonishing poise. Ulises Alcala’s costumes amplify Ocón’s majesty: wearing a large crown, she looks down from the roof of a clay house at her wandering knight. Director KJ Sanchez continuously creates unforgettable portraits, using his actors as models against the scenery and backdrop

When Quixote grew up in La Plancha, his father abused immigrant laborers from Mexico. Young Quixote (passionate Carlos Aguirre) fell in love with one of the laborers, Dulcinea, but failed to save her from deportation.

In his old age, Quixote crosses la frontera to redeem Dulcinea. Solis pulls at our heartstrings with these star-crossed lovers. Through their idealized love, he makes us feel the intensity of love thwarted by the border every day.

My favorite part was when Sancho gets blanketed. When Quixote skips out on a bar tab, angry barkeeps use a blanket to toss Sancho in the air. Juan Amador embodies the jollity and candor we expect from Sancho, our lovable payaso.

Multi-talented Hugo E. Carbajal plays a vibrant and dapper Reaper, who guides Quixote on his quest for Dulcinea. As Papa Calacas, Carbajal leads his Angels through many sweet Mexican musical numbers. Carbajal is amazing. He acts, he sings, he plays guitar. He can probably run fast and do complex math equations at the same time, too. This man can do anything.

Solis intersperses Spanish so casually into the dialogue that everyone understands. Spanish words skip off the actors’ tongues, with rolled Rs and impeccable accents, so we feel what they mean. The use of Spanish authenticates the setting, paying homage to Chicano cultural heritage.

Solis’ adaptation does everything right. He updates Quixote, making him relevant. He questions the role of family in aging and examines the way borders impede love.

And his hero, Quixote, fights for his ideals to the end. Thorough and meticulous, Solis and Sanchez help us think, listen, and laugh at each classic adventure. Solis does Cervantes proud and he does all Latinos proud. In a time when so many of us are wrongly accused of being criminal, “Quixote Nuevo” presents Chicanos as heroes of the highest caliber.