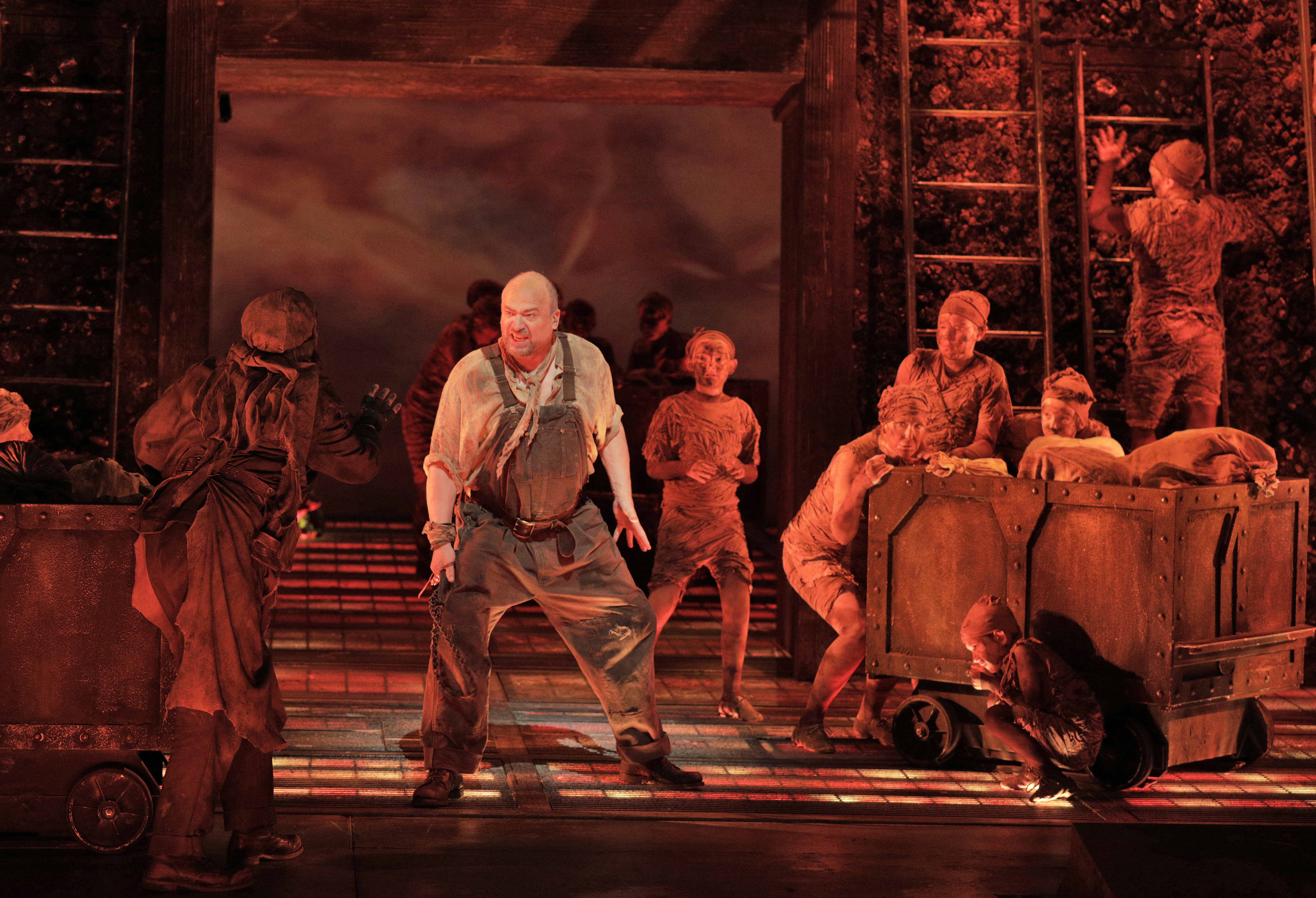 If you were near San Francisco City Hall after dark on June 12, you saw the facade and dome illuminated in vibrant red and gold. That’s because it was opening night across the street at the opera house, where—as the fire-evoking posters proclaim—San Francisco Opera is presenting the four linked operas of Richard Wagner’s masterwork, The Ring of the Nibelung, starting with “Das Rheingold.” Each opera can be enjoyed on its own, but any time there’s a chance to see all four, performed over the course of a week, The Ring Cycle becomes the cultural event of the season.

Believe me, you don’t have to be an opera lover to love The Ring, a grand moral and mythological tale conveyed through accessible singing and wondrous orchestral music. The story has everything: love, sex, greed, gold, dragons, dwarfs, and giants. Add magic spells, heroes and villains, gods and goddesses, family strife, and even the end of the world.

Wagner, who also wrote the libretto, originally planned an opera about the death of his hero, Siegfried. Then he decided to cover Siegfried’s birth and life, his parents, and the genesis of their tale—the theft of gold from its guardians on the Rhine. Creating the librettos in reverse order, and then the music from start to finish, took decades. In the end, Wagner created a new form of operatic drama, its engrossing storytelling conveyed in part through a series of musical leitmotifs.

We are seeing the co-production (with the Washington National Opera) that director Francesca Zambello staged here in 2011—with exciting new lighting, S. Katy Tucker’s evocative video projections, and the highest-caliber cast. The stellar singing and superb work by the San Francisco Opera orchestra, under conductor Donald Runnicles, make it easy to follow and thrilling to watch. So what if it’s sung in German? That’s what makes super-titles helpful.

“Das Rheingold” sets up the tale of greed, corruption, and moral and ecological decay that continues through “Die Walküre,” “Siegfried,” and “Götterdämmerung.” The gold works its damage on already compromised beings. The rage-filled dwarf Alberich (Falk Struckmann) is able to steal it from the Rheinmaidens (Stacey Tappan, Lauren McNeese, and Renée Tatum) and then fashion it into a magic ring only by renouncing love. With his huge new power, he enslaves his brother, Mime (David Cangelosi), and fellow dwarves, and mercilessly keeps them working in their gold mine.

Meanwhile, Wotan, ruler of the gods (Greer Grimsley), has hired two lunky giants (Andrea Silvestrelli and Raymond Aceto) to build his new fortress-castle, Valhalla, and the bill is due. Unfortunately, Wotan promised his sister-in-law, Freia (Julie Adams), as payment, and now she and his wife, Fricka (Jamie Barton), and their brothers (Brandon Jovanovich and Brian Mulligan) are distraught. In addition, none of the gods wants to lose the source of their youth, the golden apples only Freia can tend.

Once Wotan and the trickster demigod Loge (Stefan Margita) capture Alberich at the mine, they pay the giants with his gold. That includes the ring, which Wotan relinquishes when Erda, the earth goddess (Ronnita Miller), warns the gods about the death and destruction the ring will bring to all who pursue it. But, of course, the cycle of power madness and murderous greed has only begun.

You needn’t make the commitment in time and money to see all four operas to enjoy Wagner’s epic work. In fact, after reading this, you may want to hasten to get tickets for “Das Rheingold,” the shortest of the works. In a uniformly strong cast, Margita, with his silvery tenor and cool charisma, stands out, sparking every scene he is in. He won’t appear in the rest of the operas, however, so that’s another reason to catch this “Rheingold” if you can.

The next complete cycle begins with “Das Rheingold” on Tuesday, June 19, and again on the following Tuesday, followed by “Die Walküre” (on Wednesdays), “Siegfried” (Fridays), and “Götterdämmerung” (Sunday afternoons).

“Das Rheingold” and The Ring of the Nibelung, by Richard Wagner, directed by Francesca Zambello, at the War Memorial Opera House, San Francisco, through Sunday, July 1, 2018. Info: sfopera.com