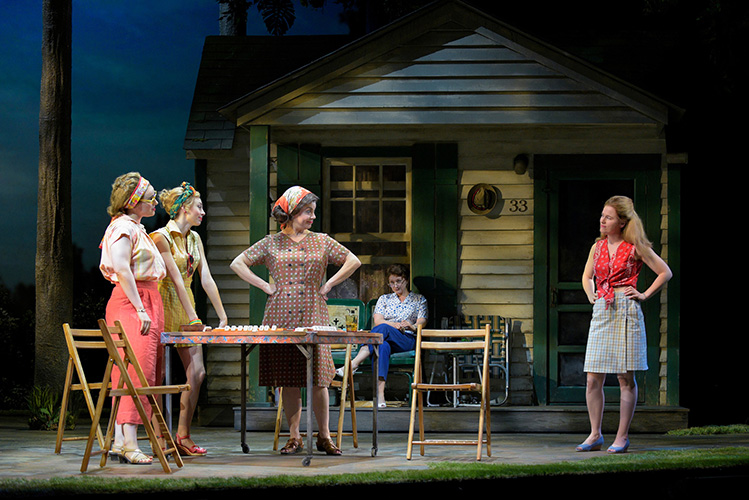 Sex, drugs, and rock and roll rule Pamela Gray’s bold new musical “A Walk on the Moon.” Premiering at ACT, based on her 1999 movie and book, Gray has turned her 1969 retrospective into a high energy musical, featuring fabulous singers and actors. Infidelity, teen age angst, and suburban tedium erupt into a cataclysm of emotions in the idyllic Catskill Mountains.

ACT audiences are blessed to be the first to view this adaptation of the celebrated film that documents life in 1969, when Neil Armstrong walks on the moon and Woodstock shocks the U.S.  “A Walk on the Moon” takes on a double meaning for lead Pearl Kantorwitz (outstanding Katie Brayben), when she finds sexual reawakening with the “Blouse Man” (rugged, handsome Zak Resnick).

At summer camp outside New York City , the turbulent Sixties turn Pearl’s life upside down. Composer Paul Scott Goodman creates music and lyrics that reflect the best 60s songs: from rock to folk to the moody ballads that resonate with Pearl’s guilty pleasures and passion.

Pearl falls for “The Blouse Man,” named Walker Jerome, raising the question: “Isn’t that backwards?” Pearl only learns his name after their first encounter.  In a curious turn, we are treated to the joke again, when Pearl gets the same question from her jealous husband, Marty. We are left to wonder why.

Adding to Pearl’s troubles, her teenage daughter Alison Krantowitz (dynamic Brigid O’Brien)  becomes a woman and starts dating Ross (charming Nick Sacks), all in the same week.  The two young lovers go through the awkward stages of first dating, trying to find their way between emerging emotions and strict upbringing.

The lighting and set design are both excellent. Credit for the dynamic lighting design goes to Robert Wierzel. Donyale Werle creates startling set designs: movable trees with leaves at many heights for various trees.

Judicious and highly effective historic videos come from great work by Projection Designer Tal Yarden.  His videos show the moon landing, Woodstock, and stark political acts from 1969, plunging us back in time.

Although the singing was on key but a little strained in the opening numbers, as the musical progressed the voices got stronger and the consummate blending of their harmonies were exceptional. The singers are well matched, showing their superior vocal skills in both solos and ensembles.

Songs like “Hey Mister President” offer political overtones, while the title could be a tongue in cheek reference to Marilyn Monroe’s famous birthday song to JFK. “Can I call you Dick?” reflects hostile feelings toward Nixon, who seems better in memory–given our present reality.

Pearl is especially touching when she addresses an open letter to Neil Armstrong in “Out of this World.”  She sings, “Dear Mr. Armstrong” while looking at the moon to vent and seek advice. The moon is featured prominently on the backdrop throughout, as our hopes and dreams for the future are reflected in Armstrong’s historic walk.

Pearl’s long-suffering TV repairman husband, Marty (stalwart, earnest Jonah Platt) plays a convincing betrayed spouse, trying to support his family.  Their estrangement and eventual reconciliation appear a bit too easy.  Still we all yearn for love to work out. So, when Marty and Pearl proclaim their renewed love, we are grateful for a happy ending.

Although Pearl and Marty know they can never “go back,” they can go forward in new ways. “A Walk on the Moon” lifts us up and gives us renewed hope for a better future.

“A Walk on the Moon,” based on a book by Pamela Gray, lyrics by Paul Scott Goodman, directed by Sheryl Kaller. at American Conservatory Theater, through Sunday, July 1, 2018. Info: www.act-sf.org