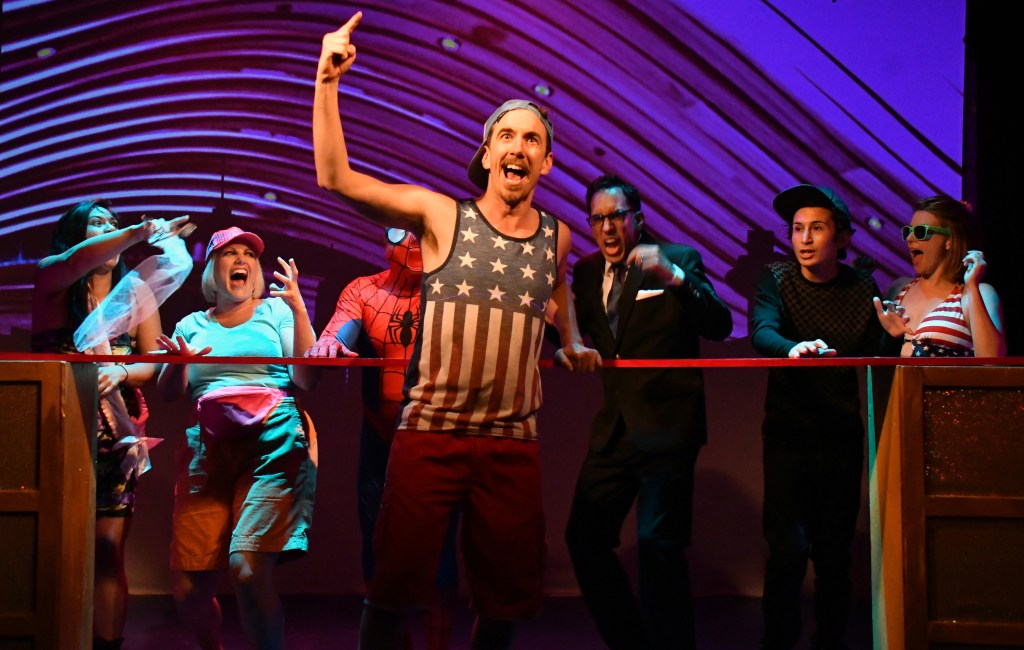 Jonathan Spector’s world premiere of “Good. Better. Best. Bested.” boldly illustrates the destructive nature of competition in our Vegas/Wall Street culture. The playwright ridicules our religion of “winning.” His ideas feel fresh and half a step before their time.

Using a rom-com style, Spector conjures a mysterious, global catastrophe that injects fear into Las Vegas, an already chaotic city. He assembles outrageous characters who intermingle on the Vegas strip, by chance.

With so many quick changes, keeping up with Director Lauren English’s fast pace is half the fun. We see Spiderman posing for money, while tourists run across the stage with selfie sticks (Andrei Garcia and Risco). Next thing you know, we find ourselves in Asia with a muddy soldier (superb Mick Mize) and a military officer (skillful David Sinaiko), sporting brilliant and absurd British accents.

And then, the selfie-stick tourists drop in, and gluttonously lick the mud off the confused soldier—because now it’s chocolate!

Artful playwright Spector, gives us a surreal comedy—a rare treat. As the mysterious terrible event hits, everyone loses internet and cell phone reception, and the crowd goes wild. Well, not the whole crowd. Some are too caught up in their personal obsessions.

When gambling addict, Walter (David Sinaiko), and his coked out teenage poker-shark son, Sheldon (intense Tim Garcia) hear about the event, they butt heads. Movingly, Sheldon wails uncontrollably, “I hate people!” Holding his son, Walter wonders about the football game. On the flip side, I empathize with Walter as well, when Sheldon looks at his father with disgust and contempt.

In all his roles, Mick Mize embellishes “GBBB.” Mize opens the show as Jordan the Magician—with magic tricks (Swoon). Jordan warns us that we “live in a world of distraction, we must stay in the present moment,” as he pulls flowers out of nowhere. I was delightfully distracted.

Mize concludes the show as the “The Bro.” Wearing an American Flag tank top, he declares, “We will fight for our right…to PARTY!” The American in me says, “YESSSSS!” Then, I think, “Oh, shit, has U.S. privilege suffocated my compassion for those less fortunate?”

Are we all judgmental narcissists? After all, that’s the “American Way.” Would you judge me or yourself for caring more about a football game than a fatal event across the world? Are we ready for the conversation that Spector is designing in his surreal and satirical vision of Las Vegas at the brink?  Maybe it’s the Next Big Thing.