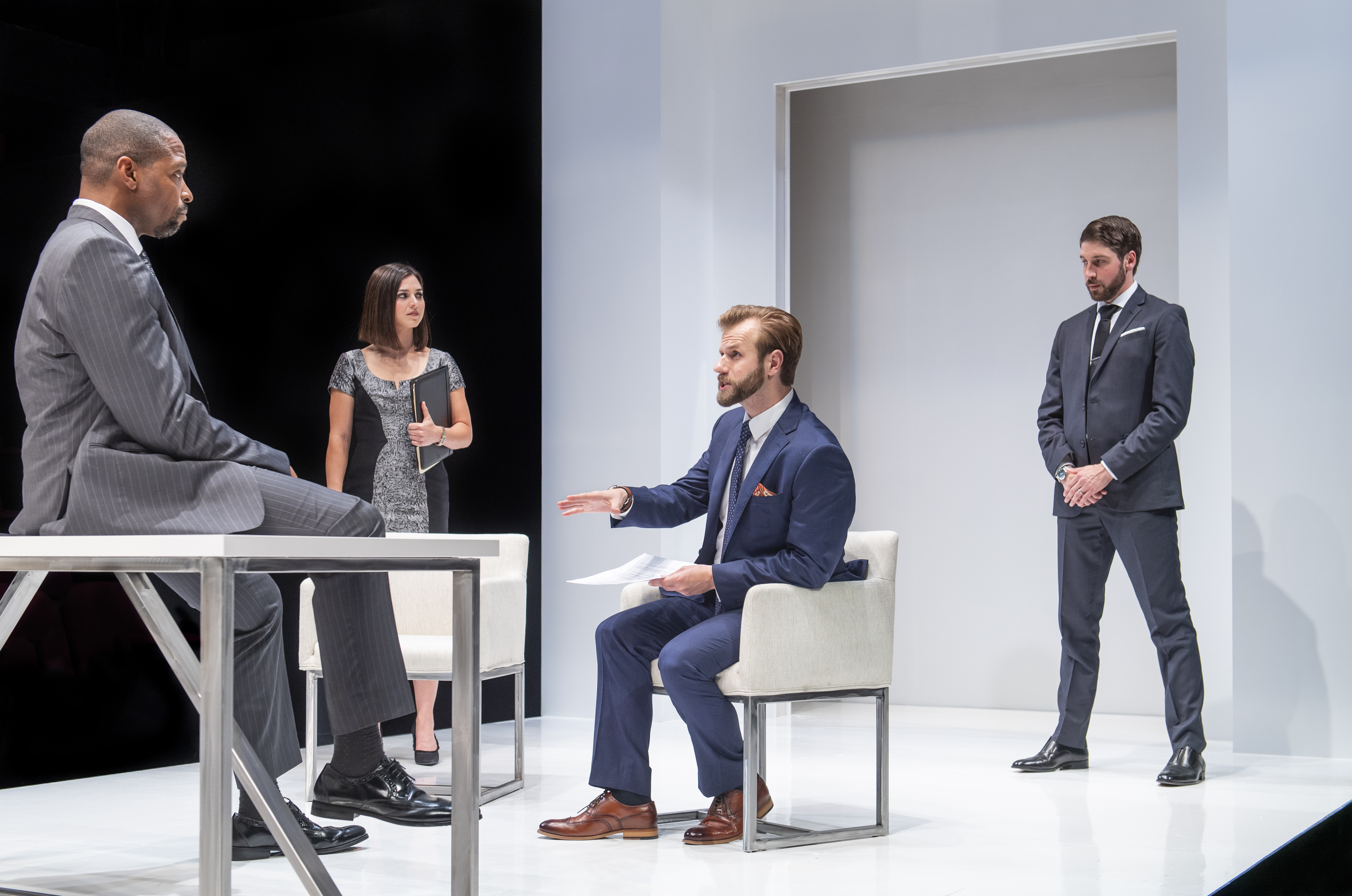 I felt like a community college student at a Harvard Business School law class watching “Dry Powder.” I felt scared, afraid, and alone, but Sarah Burgess brings us into the fold, quickly, appealing to our malicious impulse to delight in others’ losses. Her bickering businessmen in a surgical setting hold our attention better than a Netflix sitcom. Burgess transforms the mysterious world of finance into dark comedy.

“Dry Powder” runs short and hot, entertaining us for the full 90 minutes. Burgess loads about three hours worth of dialogue into this firecracker show. These four powerful actors talk fast, like slick business professionals. As corporate raiders, they spew out financial jargon: square, heads up, due diligence, on board, LOI, operating model, FAA, addendum, capital call. Burgess draws us into every syllable of her intricate dialogue.

Jeff, a California CEO, runs Landmark, a failing suitcase company in Sacramento. In New York, Rick, Jenny, and Seth circle like sharks at KMM, their high powered private equity firm.  KMM is rushing to buy out Jeff’s company before a workers’ protest can sink their LLC. The KMM sharks smell blood.

Seth sees the buyout as a way to improve KMM’s image by saving the Landmark jobs. Seth wants to build a bridge between the New Yorkers’ ruthless greed and Jeff’s compassionate practices—but the gap keeps getting wider.

Ferocious CEO Rick (intense Aldo Billingslea) smashes his phone to bits on the table, then calmly asks his assistant to order a new one. A storm of anger hovers in his determined face. When Rick grabs at thin air, then makes fists,  we wonder what he will break next.  Billingslea’s Rick, a ball of energy, may explode at any moment, like dry powder.

No wonder Rick is on edge. His lavish and expensive engagement party has brought a plague of scandal on his company. Rick’s party featured an elephant—on the same day he laid off thousands of workers. Jenny encourages him—elephant and all!

Jenny (fierce Emily Jeanne Brown) doesn’t “give a fuck” about liquidating people’s jobs. A cut-throat speed freak, Jenny will do anything to maximize profits, her stilettos smacking the stage with authority. Jenny shows us the psychopathic side of Wall Street as she puts tacks in Seth’s hair, with a sadistic smile.

“Dry Powder” takes a surgical slice into the minds of a several brands of capitalists. We feel the greed, wrath, and self-pity that Wall Street breeds. “Dry Powder” delivers a unique crash course in international business, theft, and narcissism.

Although Burgess’ drama falls short of being revolutionary, “Dry Powder” is full of information and fun. As the actors navigate the fragile, ethically backwards world of private equity, we watch gleefully, hoping to see the whole corrupt business go up in smoke.