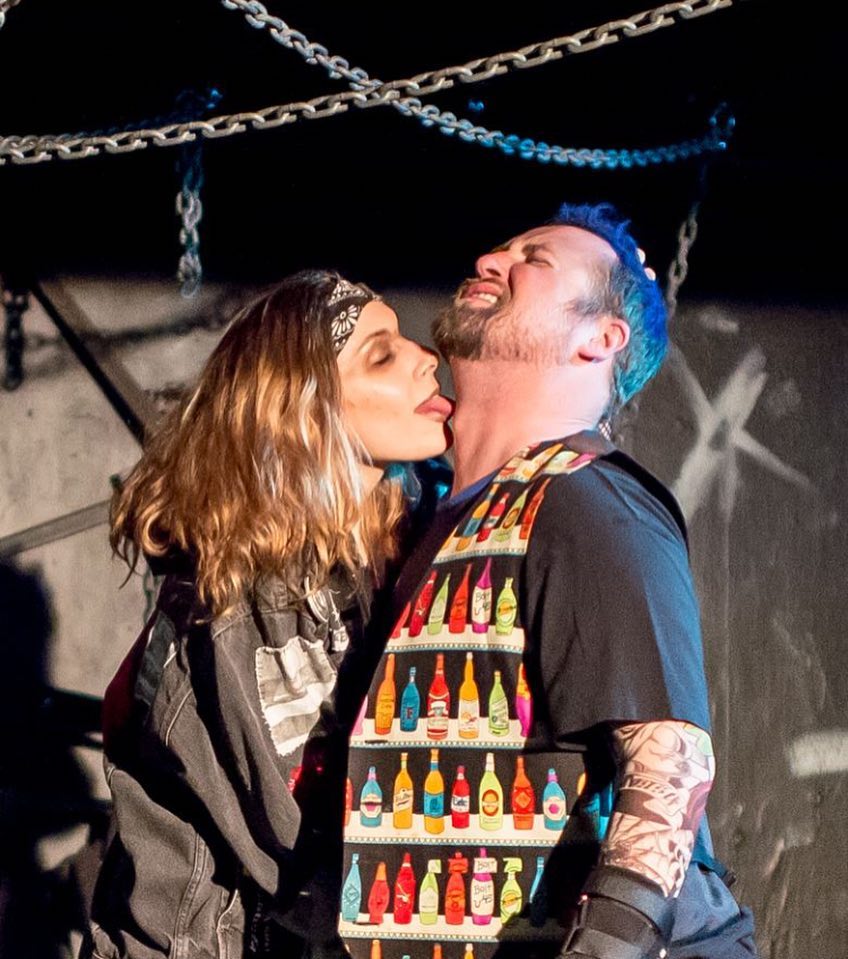 Shakespeare Says, “Get Over Sex Obsession!”

Think a fusion of Mad Max, The Purge, and The White House all in one. Theatre Lunatico uses Shakespeare’s “Measure for Measure” to create a surreal post-apocalyptic world. In this world,sex surrounds the citizens but is against the law (unless you’re married).  Scraps and trash hang on the walls along with sharp weapons, the world looks like a violent wasteland. Angelo—he’s no angel– worries about who is having sex, when his world needs a literal environmental clean up job.

Women in supporting roles are the highlights the show. Lucio, a  devious jokester, (boisterous Shawn Oda), frolics and taunts the authorities. It’s refreshing to see a woman  playing such an energetic and sexually charged role as she hits on men and women, alike, energetically.

Costume designer, Cierra White gives the trickster baggy cargo jeans adorned with pins a mesh top with deathly skull heads. As Lucio, Oda uses Shakespeare’s innuendos to grab her crotch, repeatedly. Having a blast, she thoroughly entertains with his/her over the top physicality.

Jean Cary plays a over-zealous Constable Elbow, a ditsy cop on the prowl for sex criminals. She sports a southern red-neck accent and an American Flag handkerchief. Cary delivers her comic lines so naturally, they sound fresh and news.  Even when she is not talking I can’t help but watch her eyes as she takes in Lucio’s antics. Elbow twitches or bangs her night-stick against the wall in rebellion or agreement. Her comedic timing and heartfelt dialogue light up the stage.

The Duke of Vienna (sly Leon Goertzen) speculates what his city would be like if he took a vacation. . So, he asks his Deputy, Angelo (stern Shane Fahy), to step in. Meanwhile, the Duke disguises himself  as a humble Friar. He dons on an extra small black cape with a hood, comically blending in with his subjects. Oddly, whenever the Duke/Friar while performing the Catholic Sign of the Cross, he touches his pelvis instead of his chest—an odd choice.

As a substitute leader, fundamentalist Angelo’s  ‘Holier than Thou’ attitude vanishes when he falls in lust with Claudio’s sister, Isabella (sincere Isabelle Grimm)–a nun in training, no less.  He goes so far as to promise pure Isabella her brother’s freedom—if she will have sex with him! Where was #Me Too, then?

Isabella’s face turns beet red, so we know her rage is real.  In response, Shane Fahy’s Angelo grabs his face during his soliloquies of anguish and self-torture.  Angelo even awkwardly whips himself twice, making us feel his conflict between morality and desire.

Angelo and his sex police wreak havoc on Vienna’s “low life.” He muddles his conflicted feelings. What makes desire ‘immoral’ if most of us experience it? Director Michael Barr turns Shakespeare’s dark comedy even darker, in a world run by sexual repression and one fundamentalist ruler.

Theatre Lunatico’s “Measure for Measure” makes fun of oppressive authority,  sex regulation, and know it all rulers. Even though he wants to avoid hypocrisy, Angelo is out of touch with his own feelings. Remind us of anyone?