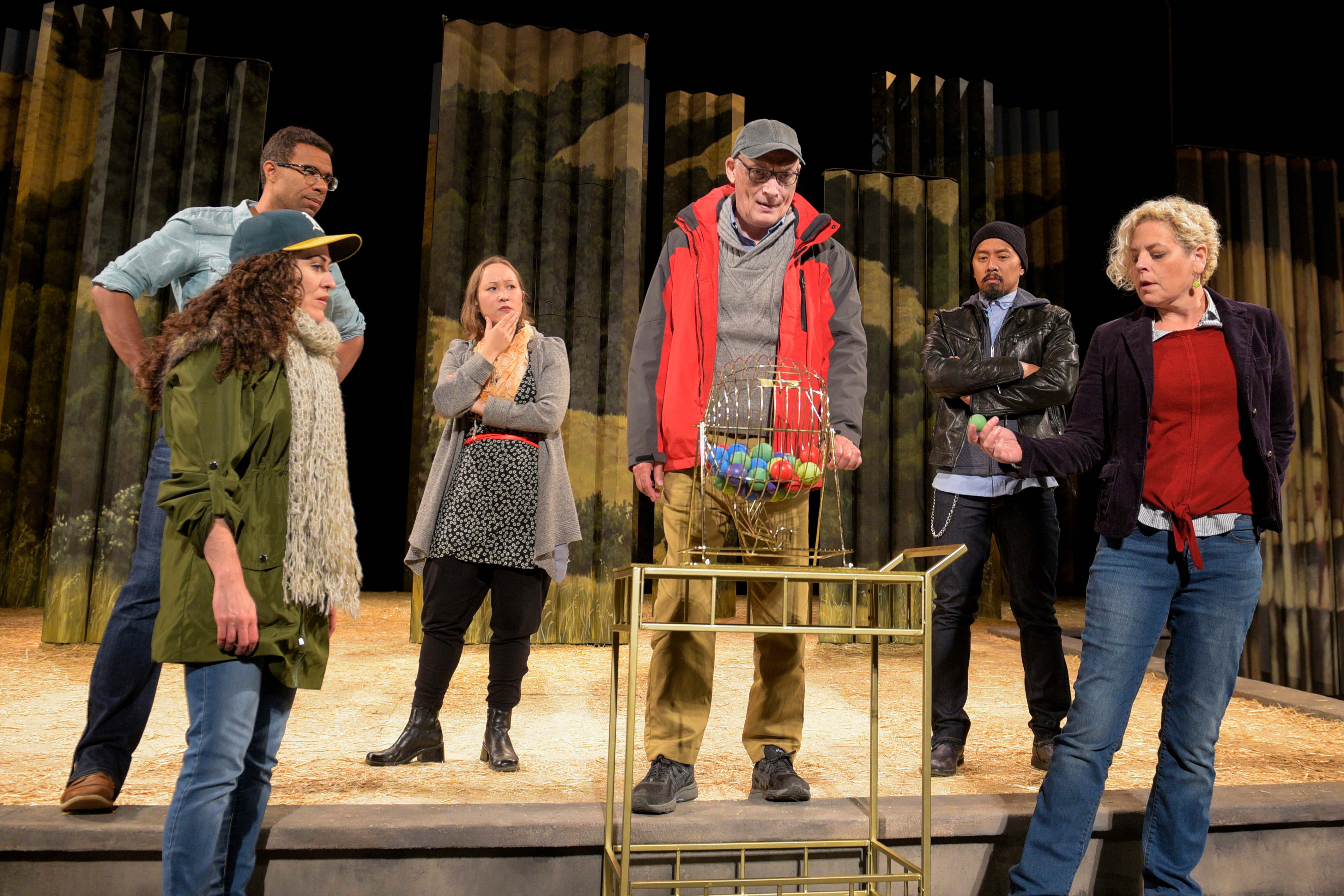 “Everybody” puts our isolated lives on the griddle. Britney Frasier, a brilliant and baffling God, puts us all in our places. Then she sends Death to find Everybody, who screwed up her/his Life. Playwright Branden Jacobs-Jenkins up-dates the morality play “Everyman,” creating a parable of our privatization of Hope.

In a turquoise sweater, Frazier/God authoritatively directs Death (bedeviled Victor Talmadge) to pluck five “Somebodies” from the amphitheater.  Death is hiding out, wearing an orange camper-vest—just doing his job. God orders him to tell Somebody that She wants an accounting—Somebody’s Time is up!

This modernized “Everybody,” with an interchangeable leading role called “Everybody,” underlines our loss of hope, our inability to care for Other Somebodies. Five Somebodies are brilliantly portrayed by Stacy Ross, Lance Gardner, Sarita Ocón, Jenny Nelson, and Jomar Tagatac.

Do not mistake: this unsettling modern comedy constantly surprises. We will be talking about Director Nataki Garrett’s arena-wide staging, and Nina Ball’s imposing accordion pillars for years. The pillars—or trees—manage to be classical and natural, echoing Roman columns and the green, gold Orinda hills. Then, even the apparently solid pillars/trees change, reflecting us all.

In a quiz show lottery, each actor grabs a colored ball to find her/his roles for today, with 120 possible variations. They each know all the roles by heart—a rolling lottery.

On Opening Night, Stacy Ross won/lost the lottery, and she became a touching, funny “Everybody.”  Threatened by Death, she desperately attempts to make contact with disregarded friends. Her tortured, passionate manipulations to get Somebody to accompany her on her final journey are poignant and priceless.

Lance Gardner played Cousin as a glad-handing doofus relative. Later, he plays a delightfully self-absorbed Mind, promising vainly to stick with Everybody till the end.

Jenny Nelson entrances as a self-involved “Stuff” in her gee-gaws, and she plays “Senses,” with a witty lilt.

The mercurial Jomar Tagatac played “Friendship” and “Strength,” bringing his buoyant insights to each lyrical phrase.

Late-appearing Love (inspired Avi Roque) puts Everybody through her paces. Love makes Everybody strip down and run around shouting: “I am meat. I have no control,” a startling, provocative loss of hope and connection.

Above all, we are dealing here with a new-fangled privatization of Everything and Everybody. In our world, it costs a lot to be well or ill, to have friends and relatives, to keep our Five Senses going till the end.

Everybody has been commodified. The U.S. is up for negotiation, debate, and discount pricing. How much does it cost to get a cousin or a friend to accompany you all the way? Where are all the others who could have helped us?

Oh, I guess we dumped them long ago—when we decided only the few are worthy of health care, serious work, or free education. “Free” is a bad word now—we worry that Somebody Else will get “something for nothing.” We have privatized ourselves, our hope, and our future.

Does anyone remember when university was free, when public schools were admirable, and people got pensions?  All that is gone now—and you better pay your $70,000 student loans. And let’s keep those people out of CAL, too.

In his witty and arch play, Jacobs-Jenkins makes us look at US, and the isolation we have created. “Everybody” mingles fun and self-reflection. “Everybody” makes us laugh and think about how we live. Cal Shakes brings us 90 minutes of Joy—and a Giant Skeleton Dance!