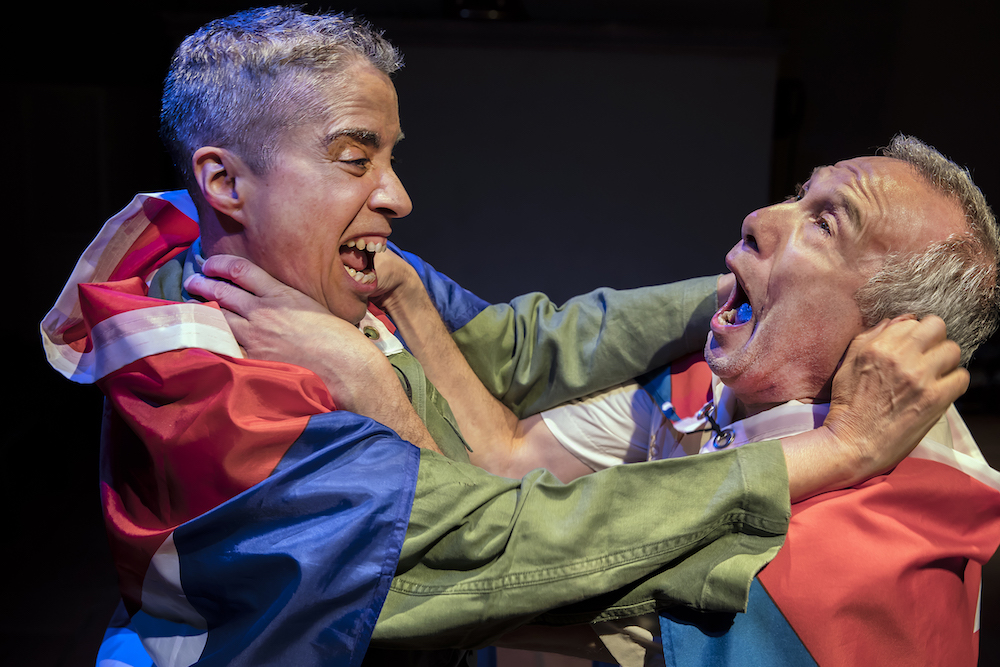 The world premiere of “King of Cuba” comically pits two political pity parties, left and right, against each other. Adapting her prize-winning novel of the same name, Cristina Garcia makes fun of both parties, and has us chuckling all the way. Garcia makes fun of two old men at war, in a Cuba versus Florida pissing contest.

In a Victorian parlor at the Berkeley City Club, Central Works features Carlos Caro’s one-man band; warm natural light from the garden; and four chairs to transport us to Cuba and Florida in the 90s. Garcia’s lyrical script and the marvelous Marga Gomez bring it all to life. When Gomez struts in as El Comandante, she pulls back her shoulders and puffs out her sternum. She stomps around with balled fists. She spreads her legs wide to make room for El Comandante’s cajones grandes.

Gomez speaks with a throaty, raspy voice, and her lips drag like a 90 year old man. Her Castro fooled my partner into thinking she is male. She illustrates the delicacy of a powerful man whose body is weakening day by day. Gomez skillfully captures a sad and frustrated El Comandante, showing us his sharp mind in a decaying body.

But a mysterious Angel (suave Ben Ortega) interferes in Castro’s and Goyo’s dreams, reminding them of age and death. The Angel urges Goyo and Fidel to fight for their separate legacies. One in Cuba, the other in Florida, they hunker down in entrenched political positions.

We see Cuba’s pre-revolutionary world through the eyes of two crab catchers (sassy Leticia Duarte and versatile Ben Ortega). They reveal what life was like in pre-Castro Cuba: limited education, no health care, and short lifespans. But the younger crab catcher feels trapped working for tourists.  She wants life on her own terms, not her dictator’s.

“King of Cuba” challenges “leaders,” of both parties. It’s not about what you represent but how you represent. Garcia’s play fits our terrorized political moment. Is it time to ditch the party line and find a new one? I would like to watch “King of Cuba” again to figure out that riddle.