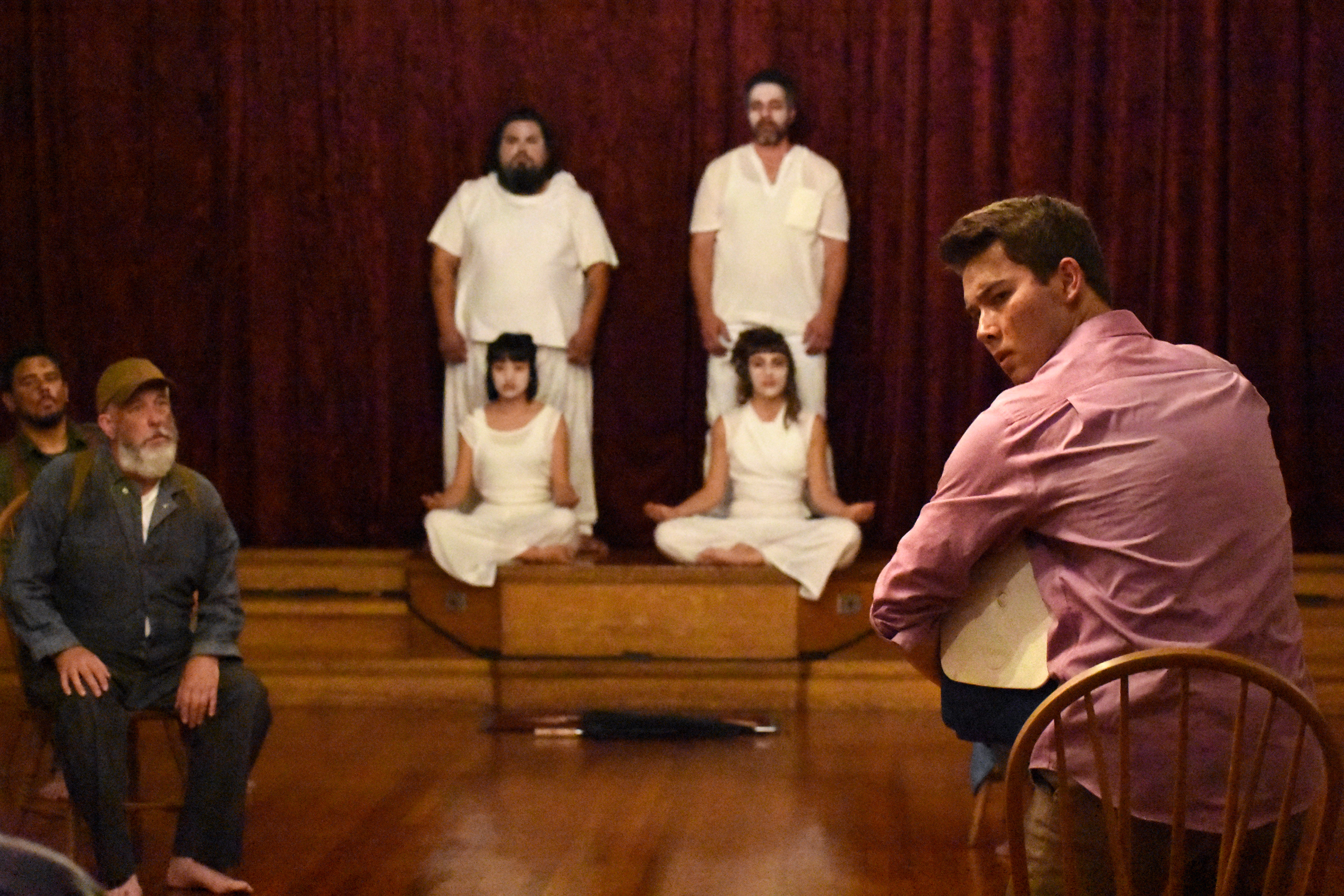 In “Pool of Unknown Wonders: Undertow of the Soul,” Philip Kan Gotanda takes us on a surreal, sci-fi adventure, prompting questions about time and society. Gotanda is asking:  How can we reach “The Pool?”  Gotanda and Ubuntu Theater Project take us on a space voyage that creates a new myth, ready to be explored by other artists.

In “Pool of Unknown Wonders,” six passengers take a spaceship to escape the “toxic stressors” that we all live in.  Mrs. Bankhead, a Black mother, (potent Dawn L. Troupe) reveals how she has been ignored and censored in her own country. When she recounts her tragedy, I feel the fear and bigotry she faces.

But, here’s the fine print: To reach the magical Pool, the number of passengers on the ship must remain the same. So, they must take care of each other–a far-reaching and wonderful idea.

All we see is the bare stage until orange lights flicker signaling that Pilot Monkawa (imaginative J Jha) has started the spacecraft. Echoing the Matrix, the six space travelers lose track of time in another dimension. On board the spacecraft, the voyagers switch between arguing and telling their stories. Each passenger reenacts his/her their own trauma in flashbacks.  As they face separate challenges, “Pool of Unknown Wonders” begins to offer a compilation of choppy interludes and I sometimes space out. But, a sudden and surreal tragedy keeps me alert on board the spacecraft.

Gotanda’s multiple character called “Karmas” illustrates toxic threats to each voyager’s destiny. Karma is made up of four actors, dressed all in white with white painted faces (Michael Aldrete, Dov Hassan, Indigo Jackson, and Sharon Shao). Karma is fed up with the world, afflicting us all with trauma and strife.

Karma holds a red white and blue umbrella and slyly beckons immigrant Hamsun (passionate Nathaniel Andalis) into its arms. Karma pushes him away, yelling “I hate you!” Hamsun yanks at his hair in frustration and recoils as Karma gently invites him into her arms one last time. Nathaniel Andalis beautifully portrays first and second generation immigrant truths.

Tension heightens as they travel. White male passenger Gorkys (articulate Peter Stielstra) is shunned because he carries a mysterious cooler.  They all want to know, “What’s in the cooler, bro?” Finally, we feel empathy for his isolation.

The Pool promises healing. We are all on this trip with them, hurtling through space—will we make it to the Pool? In space without time, Philip Kan Gotanda gives us all the time in the world to ponder his alluring Pool. His fresh, experimental, and mythological play could give rise to a new wave of art and exploration.