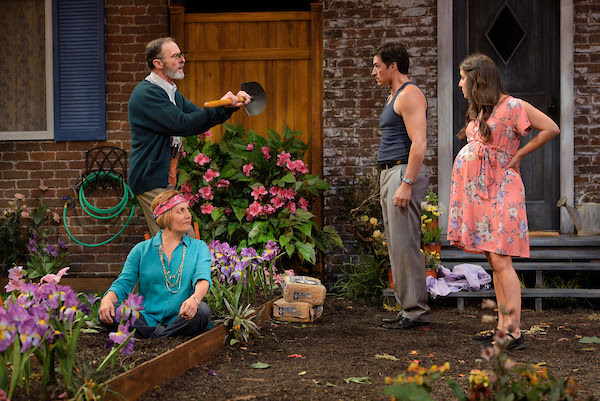 “Native Gardens” reminds me of the sitcom “Married with Children,” with hilarious, exaggerated figures who talk shit while loving each other. Emotions temporarily blind neighbors from seeing each other honestly. We can see how alike they actually are, as they thrash around in each other’s gardens.  Karen Zacarias provides us with insights on how young and old, Democrat and Republican can all get along.

Karen Zacarias’ “Native Gardens” points the way to resolving severe cultural clashes. Young, pregnant, up and coming couple, Tania and Pablo Del Valle (vivacious Marlene Martinez and steadfast Michael Evans Lopez) flee urban Washington for the expensive D.C. suburbs. The Del Valles are pursuing the American Dream. With Tania vividly pregnant, they are remodeling their new house that needs a lot of work, especially a new fence and a garden of indigenous plants.

Tania and Pablo discover that their friendly Republican neighbors, Frank and Virginia Butley (hilarious Jackson Davis and striking Amy Resnick), have been accidently planting flower beds two feet into the Del Valle’s new garden. That’s $15,000 worth of land! Tensions run high between the young city couple and the older, privileged couple. Each are fighting for their “native gardens.”

Like the Native Americans before them, the Butleys feel that foreigners are taking their land. Chilean lawyer Pablo and Chicana PhD student Tania are ripping up their prize garden–and they are pissed. It’s satisfying to see Virginia Butley running savagely toward the Del Valle’s garden with a chainsaw–she don’t mess around! American history is being turned topsy-turvy.

Scenic Designer Andrea Bechert creates a stunning suburban landscape. The Butley’s well-tended, but disputed garden belongs on the cover of House & Garden. With a perfectly manicured lawn and imported tulips and azaleas, poor Frank Butley has dreams of winning the Garden Trophy.

Playwright Zacarias’ brilliant dialogue hilariously defines their conflicts. Tania patriotically proclaims that even though the Butleys may be Republicans, “they are still human.”

We get an inside view from opposite sides of the fence–what each party thinks about the other. The war between them provides explosive humor.  It should be simple to put up a new fence to replace the old, right? “Native Gardens” proves it’s not so simple–it’s a must see!