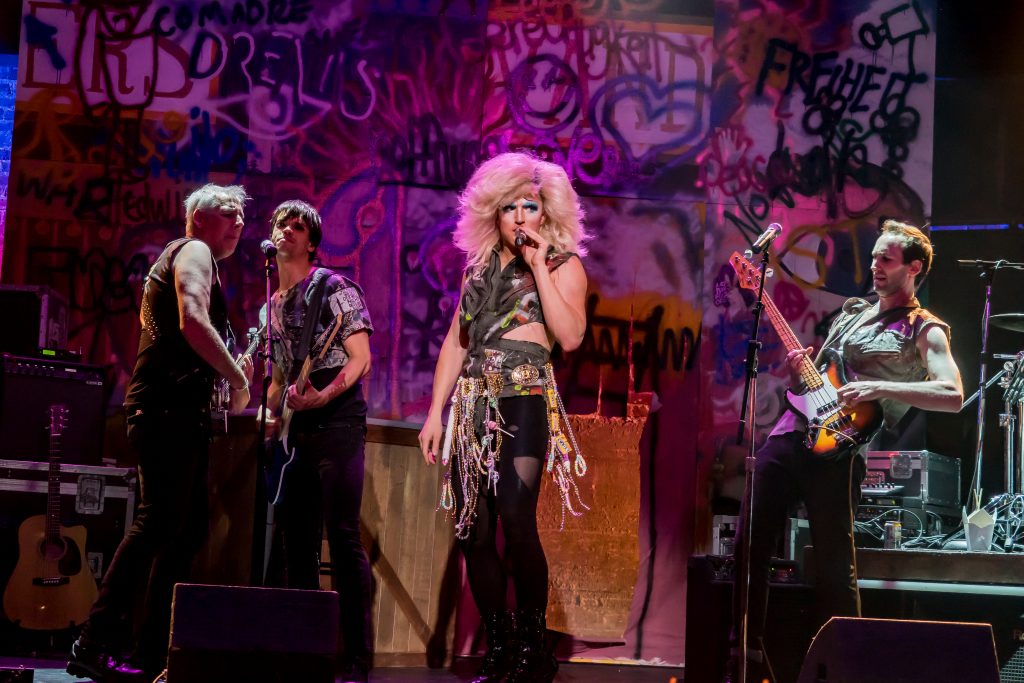 By the end of “Hedwig and the Angry Inch,” I am breathless and choking back tears. Hedwig (superlative Coleton Schmitto) is stripped bare of his clothes and all emotional walls. Bright floodlights shine from behind, as Hedwig slumps over a tall ladder. We are shaken by the transformation. Hedwig and Yitzhak (striking Maya Michal Sherer) urge us to “lift up our hands.” Yet we’re already doing just that, swept away by the magnificent staging and spectacular performances.

“Hedwig” takes place entirely at a rock concert, with a glorious vulgar rock diva and a four-piece grunge band. Between powerful anthems like “Tear Me Down” and “Sugar Daddy,” we learn that Hedwig grew up as a boy in East Berlin. An American voyeur forced the boy into an illicit sex-change operation that went wrong, and Hedwig was left with “an angry inch” of flesh. 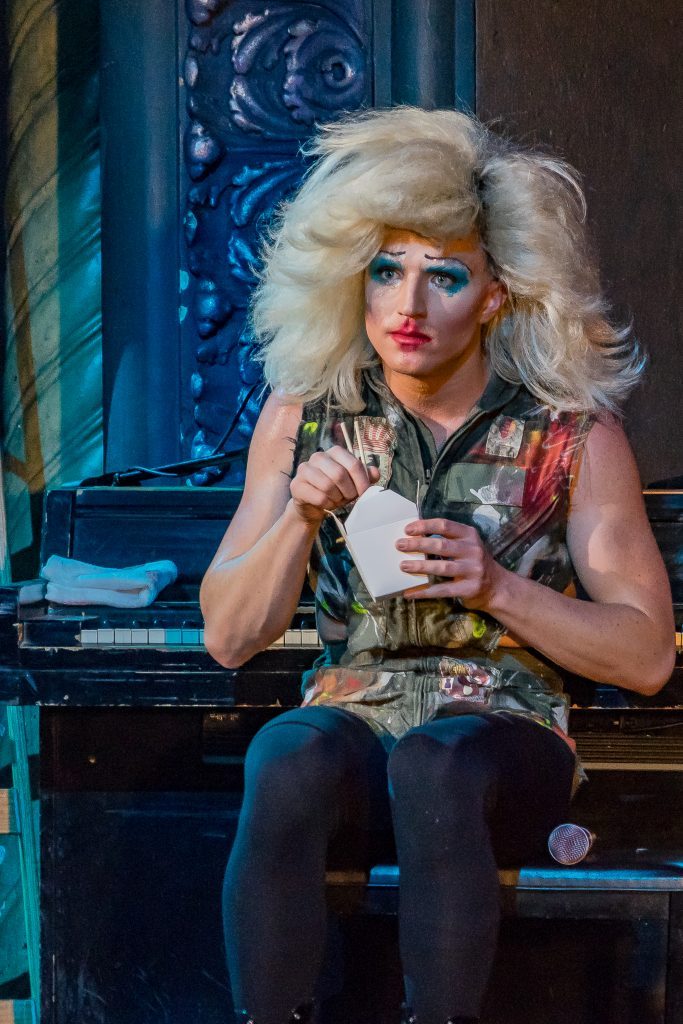 Arriving in the U.S., Hedwig abandoned binary gender roles, becoming a rocker with a signature blonde teased wig. While delivering this tragic backstory, Hedwig makes us belly laugh with a crude, hilarious comedic wit. The jokes cross barriers, but Hedwig delivers them with successful self-deprecating humor.

Schmitto skillfully highlights Hedwig’s vulnerability and insecurity. Our hearts break as he reveals Hedwig’s hopes and doubts about finding a soulmate in “The Origin of Love.” Schmitto embodies Hedwig’s tortured past, touching us with a sorrowful gaze and silky sweet singing, without sacrificing confidence or charisma. 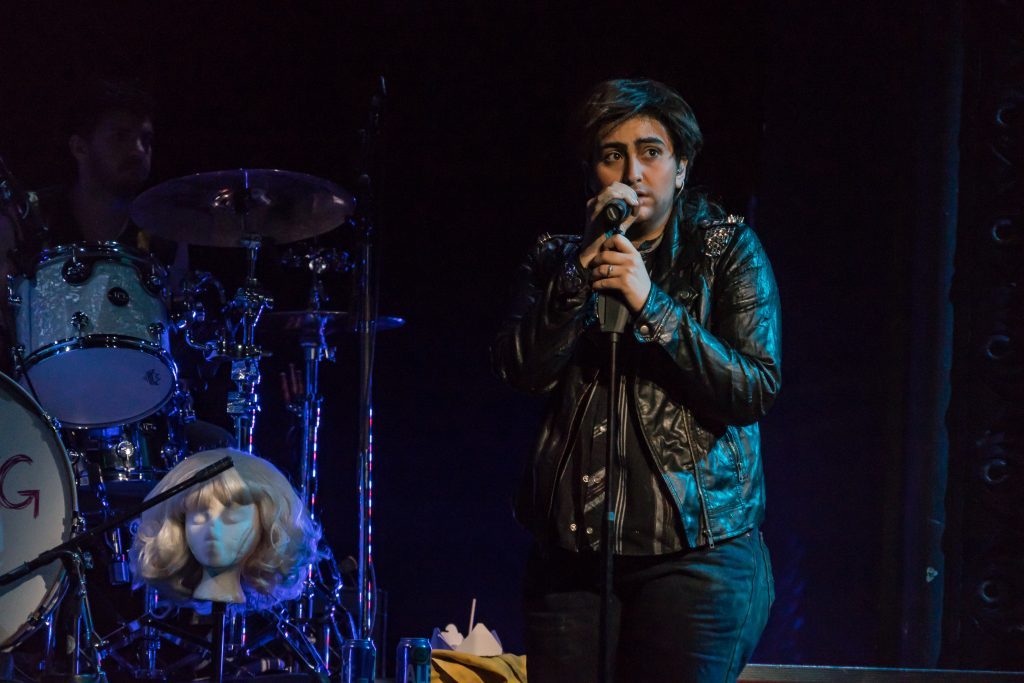 Hedwig’s self-assured persona is complemented by the reserved and awkward Yitzhak. We learn that the two are not only musical partners but are actually married, and that Hedwig has forced Yitzhak to present as male. Departing from other productions of “Hedwig,” directors Sailor Galaviz and Jason Hoover brilliantly depict Sherer stumbling through “The Long Grift” a capella, highlighting Yitzhak’s timidity and hurt.

By the final number, “Midnight Radio,” Hedwig’s humanity has evolved into a beautiful emotional rawness. Laid bare onstage, Schmitto exudes a newly discovered physical strength and grace. In this moment of power, Hedwig presents as neither male nor female. We celebrate this abandonment of traditional gender roles, and Hedwig’s triumph over a tumultuous past. Yitzhak also undergoes a stunning transformation, comfortably belting out impressive high notes and embodying self-confidence.

Although the Victoria Theater’s acoustic challenges can interfere with the lyrics, Schmitto’s spectacular performance captivates us all. What a thrilling spectacle! 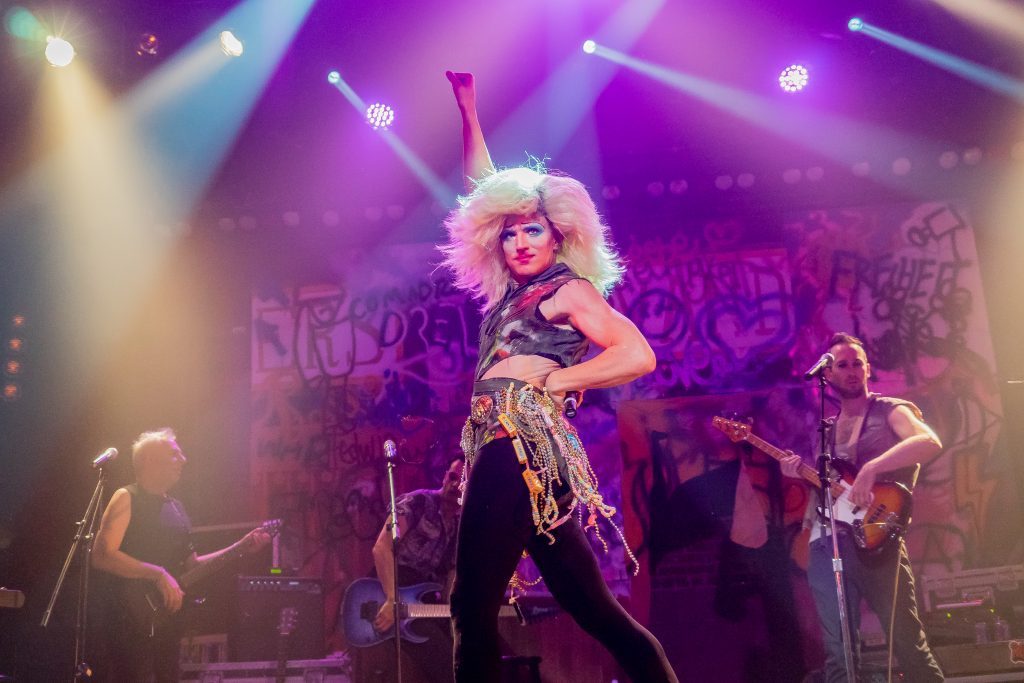 “Hedwig and the Angry Inch” – text by John Cameron Mitchell, music and lyrics by Stephen Trask, directed by Sailor Galaviz and Jason Hoover, by Ray of Light, at The Victoria Theatre, San Francisco, through Saturday, October 6, 2018. Info: rayoflighttheatre.com