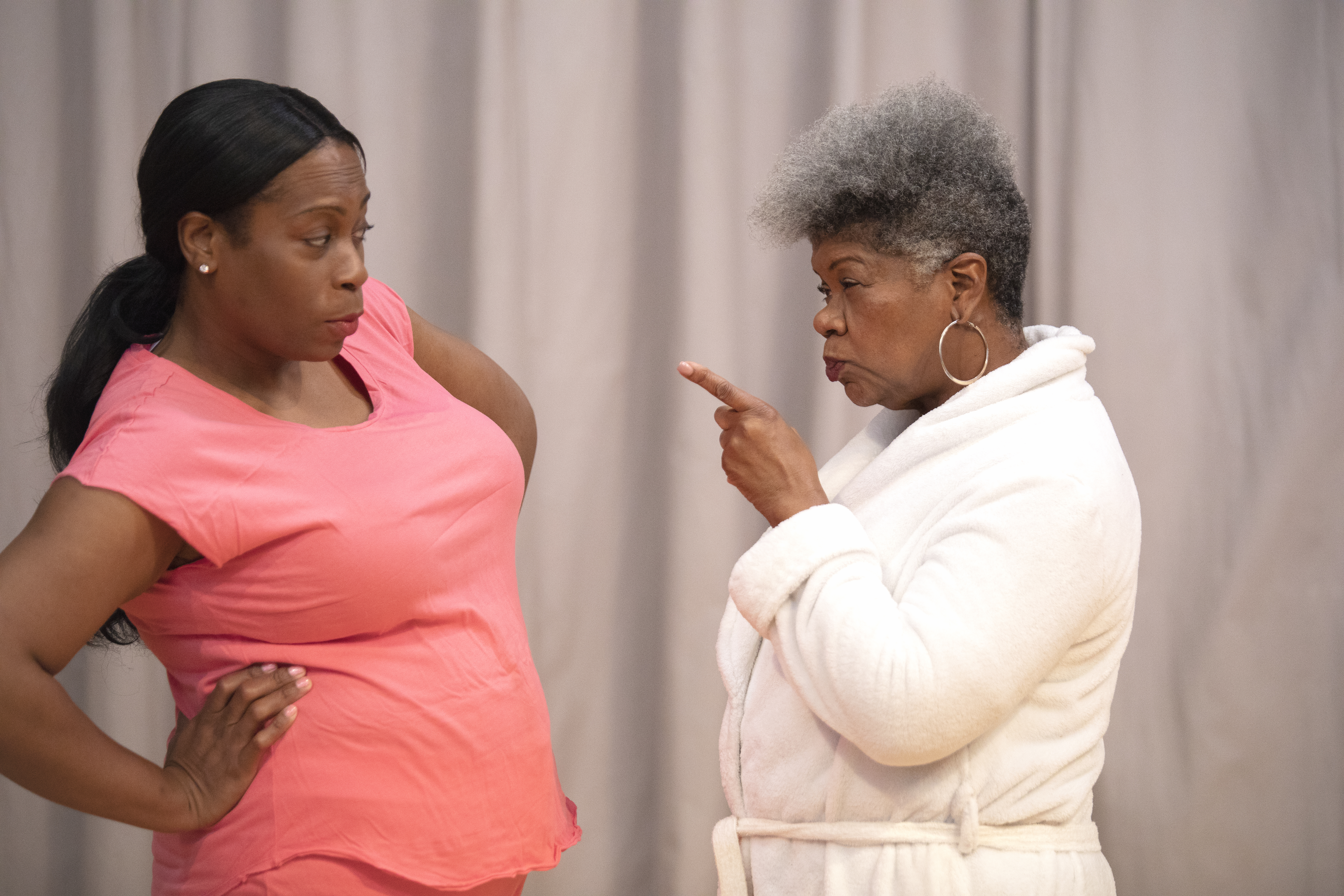 Two black women are struggling over life and death. One is a wealthy woman in hospice care who is dying of cancer. She can’t die fast enough for to suit herself, so she tries to get help from her nurse. Her nurse, Veronika Fern, is a god-fearing Christian young woman, who works hard and has no time for a self-indulgent slouch like Carolyn.

They form an ill-matched pair—but they have only each other—staying alone in Carolyn Whitlock’s “lovely home where it’s acceptable for black people to have lovely homes.” The two actors deliver memorable and shocking performances–we laugh, we wonder, we ponder…

Carolyn Whitlock (intriguing Shirly A. Smallwood) knows how to capture the attention of her nurse—she tries to electrocute herself in the bathtub, she tries to take a bottle of pills—but stalwart Veronika is on to her tricks. She won’t allow it.

For her part, Veronika Fern (confident Cece Suazo) puts her faith in God, and tries to control the nasty, domineering, foul-mouthed Carolyn, who brandishes her wealth like a weapon. She’s worth $89 million dollars, she claims. And then she tempts Veronika with all that money.

Smallwood dives enthusiastically into Carolyn’s search for an immediate end, bringing comedy to her quest for death. It’s a witty comedy, full of down-to-earth exchanges between them. We laugh at spoiled and nasty Caroline’s attempts to manipulate her hard-working hospice nurse.

Playwright Chisa Hutchinson exposes a lot about the spoiled rich woman, including showing her nearly naked in the bath. The awkward moves between these two radically different women—one from the rich class and one from the working class can be droll and enlightening. Who but the poor working nurse will take care of our aging, well-off 1%-ers?

As a wealthy Black woman, Carolyn breaks the norm, exercising her power over another a Black woman. We feel the sting of an older woman’s condescending to a woman with less money and power. In a way, it’s a startling version of Trump and all the workers he bamboozles. And then bamboozles, again.

The much more sympathetic character of Veronika Fern comes forward as Carolyn tries to trick her into killing her employer on the spot. But Veronika is a good Christian who refuses to comply. But rich people get what they want, don’t they?

Sometimes we don’t know whether to laugh or cry at these shifting struggles, as the actors try to deal with Hutchinson’s ambiguous plot.

Will Carolyn accept Jesus as her personal savior? Will Veronika even consider mercy-killing the afflicted Carolyn?

Finally, what is the secret that Veronika has to tell her at the end? You will have to find out for yourself.