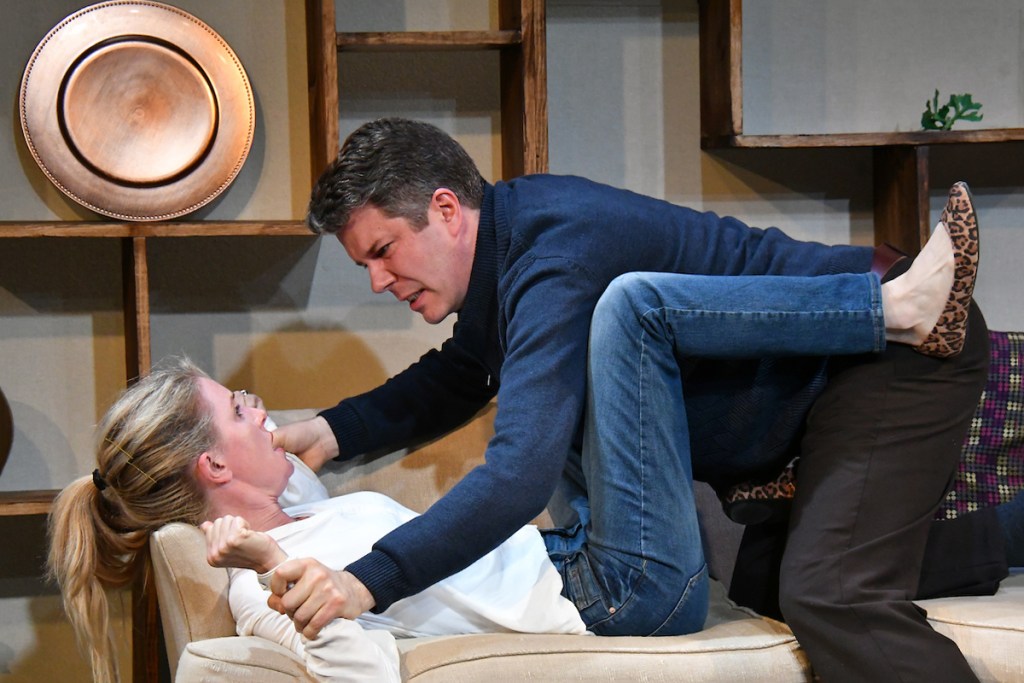 Some productions just go beyond our fondest expectations. That magical moment happens when superb, thoughtful acting, skilled direction, and a masterful script combine to produce 90 minutes of pure provocation and delight. At Custom Made Theatre, Director Paul Stout, and four comic/tragic actors at the top of their game have grabbed the Gold Ring. In “The Goat, or Who Is Silvia?” the cast and crew have struck gold with Edward Albee’s shocking tale of a modern man having a sexual affair with the Goat of his choice.

“The Goat”clips along at a rapid pace, with smart surprises at every turn. Will the world-famous New York architect recover from memory loss? What do people at those stratospheric heights really care about? Why is Martin (thoughtful Matt Weimer) distracted and spacey? What will his wife say when she finds out about Silvia, his Goat partner? Answer: His witty and combative wife Stevie (hilarious Hilary Hesse) will explode like an atomic bomb!

Winner of the 2002 Tony Award for Best Play, Albee’s “The Goat” has been turning heads ever since. Albee asks questions about love that go beyond even bestiality. Is Albee talking being gay and being shunned by parents and strangers alike? Are sexual preferences still unacceptable, today?

Albee’s beautiful lyrical language brings us to appreciate the many subtleties and choices instigated by love. Albee interrogates the nature of love, itself. He investigates all kinds of choices and personal preferences by holding this shocking mirror up to Nature. Albee takes us back to the Elizabethan song, “Who is Silvia?” to connect us to an idealized and classical connection to nature, to the woods, to love, itself.

Director Stout has managed to keep the wonder of choice in front of us all the way through—the play works on the sexual, personal, psychological, and political levels, all at once. “The Goat” grips us from scene to scene and person to person. In Matt Weimer, we find the ideal Martin—a wildly successful upscale architect, winner of the Pritzker Prize, who suddenly finds himself facing a crisis at age 50. He tries to confess to his wife, and his best friend Ross (confident, humorous Ryan Hayes), but they cannot handle it. Weimer gives us delightful pauses and meditative silences to allow the full grotesque to sink in.

Martin’s touching confessions are rebuffed, much in the way that a 50s parent might reject a gay son or daughter. Or, maybe the way that Republican senators are treating Dr. Christine Blasey Ford? Even Martin’s son, ironically named Billy (delightful Max Seijas), himself openly gay and accepted by his parents, cannot handle his father’s “sins.” Here, the son rejects the father, comically enacting a parental role. Seijas, as gay son Billy, expresses his disdain delightfully: “At least I do it with People!” he says.

Martin’s friend, his wife, and his son turn on him, viciously. And Albee helps us to see their inability to deal with Martin’s romance. As his lifelong friend, Ross, Hayes explosively reveals  Martin’s secret—because Ross simply cannot deal with the “truth.” He is a delight to watch as he fumes over his friend’s choice of sexual partner.

I’m going right back to see it, again, because you don’t get many chances to see this great work by Albee onstage. Custom Made’s production  explores both comedy and tragedy, and makes a cogent comment on who we are, right now. Even though I have seen “The Goat” before, this production is a thrilling reincarnation of Albee’s late, great masterpiece!

“The Goat, or Who Is Sylvia?” (Notes toward a definition of tragedy) by Edward Albee, directed by Paul Stout, at Custom Made Theatre Co., San Francisco, through Saturday, October 20, 2018. Info: custommade.org