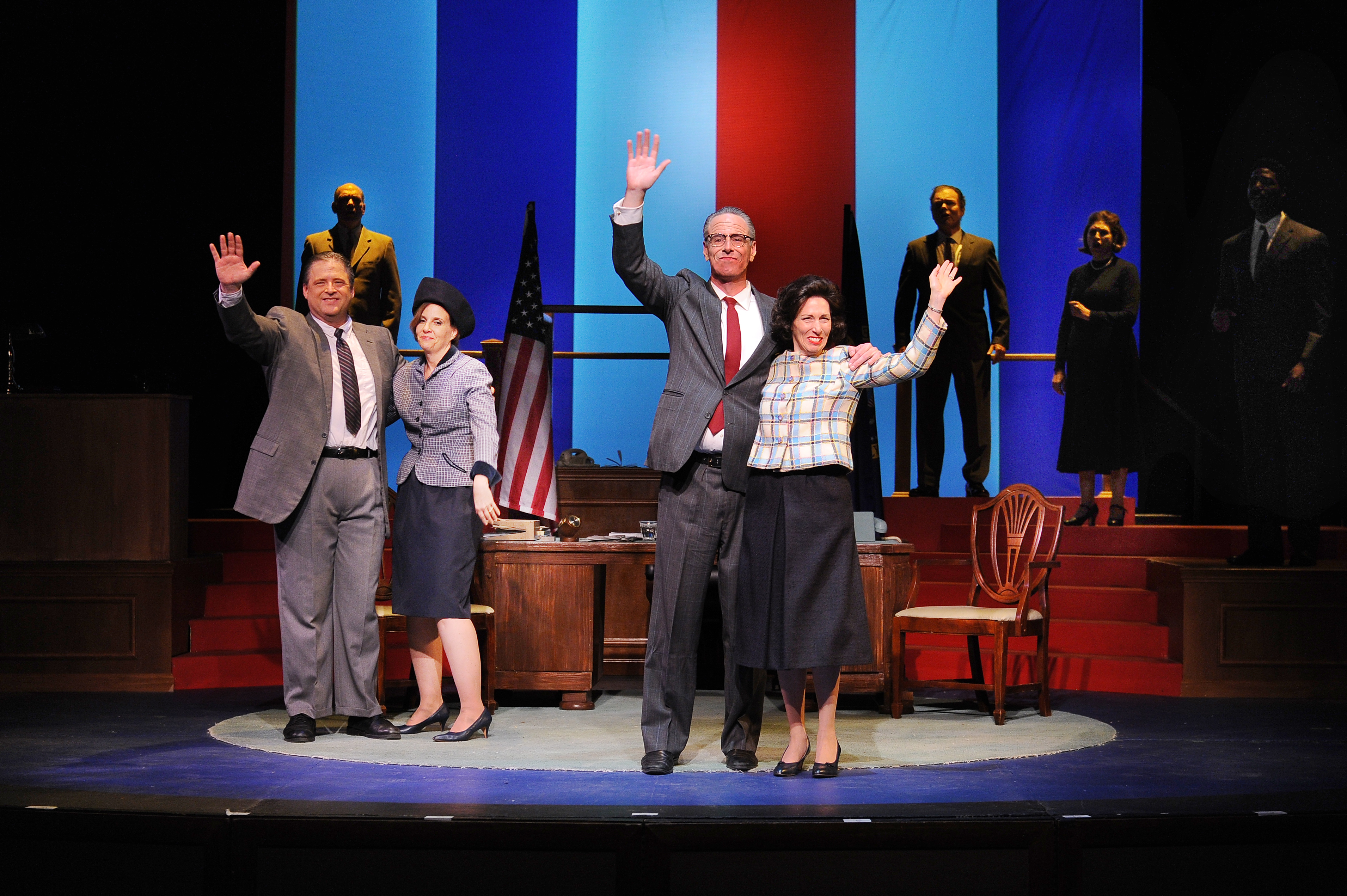 The power behind Lyndon Baines Johnson (sympathetic Michael Monagle) is Lady Bird Johnson (touching Gwendolyne Wagner). Lady Bird knows when to kowtow and when to flee the room. Well, it turns out that Lady Bird was the source of LBJ’s wealth, of his TV stations and newspapers in Texas.

So, the woman behind LBJ made him what he is in “All the Way,” the Tony Award winning drama that tells all. Maybe that’s why LBJ is so fragile about his accomplishments. Lady Bird was wealthy enough to take Lyndon out of teaching little kids in a rural grammar school, and elevate him through her love and money.

There’s a secret wrapped in an enigma in “All the Way” and its not the rest of the motto, “All the Way with LBJ.” And it’s not in the secret recordings of Martin Luther King, Jr. (subtle Fred Pitts) and certain women. In the political arena of 1964, the secret roles of women behind the Civil Rights Movement begin to come clear.

When LBJ was a first-grade school teacher in a tiny town in Texas, he was struck by the poverty of his little Mexican-American pupils. The poor kids could not afford a decent breakfast or decent clothes for school. Lyndon vowed that if he ever had power, he would do something for those children. And he did.

In November 1963, when Johnson ascended to the presidency after JFK was shot, LBJ worked his Texas will on the Senate, of which he was the manipulative master. Johnson got the great Civil Rights Act of 1964 passed. As he predicts, that bill lost the Democrats the South till now.

As brilliantly acted by Michael Monagle, LBJ swaggers across the stage and looks down on mere mortals from a great height. In fact, his height, postures, and belly make him powerful. LBJ eats, drinks, struts, and declines on a grand scale.

Intrepid Fanny Lou Hamer (convincing Shannon Turner) turns up as another powerful, political force.  Hamer, leader of the Mississippi Freedom Caucus, dares to protest at the ‘64 Democratic Convention. After being assaulted and tortured by white Mississippi sheriffs, she becomes an activist who insists on being seated. Again, Robert Shenkken’s women assert their rights and redirect the ship of state.

Kevin Copps as Walter Jenkins delivers a touching role as LBJ’s protegee, only to be rejected and boycotted. Tom Gough delivers a vacillating, ambitious Hubert Humphrey, who walks a knife’s edge as the Great Liberal Hope, and Johnson’s plaything.

All in all, a wonderful drama depicting covert politics from Kennedy’s death to Johnson’s election in 1964. In that one year, the conflicts between Southerners and Northerners, King and Johnson, Hamer and Humphrey make a thrilling slice of history. Now we know why the South votes Republican. Will they ever change?