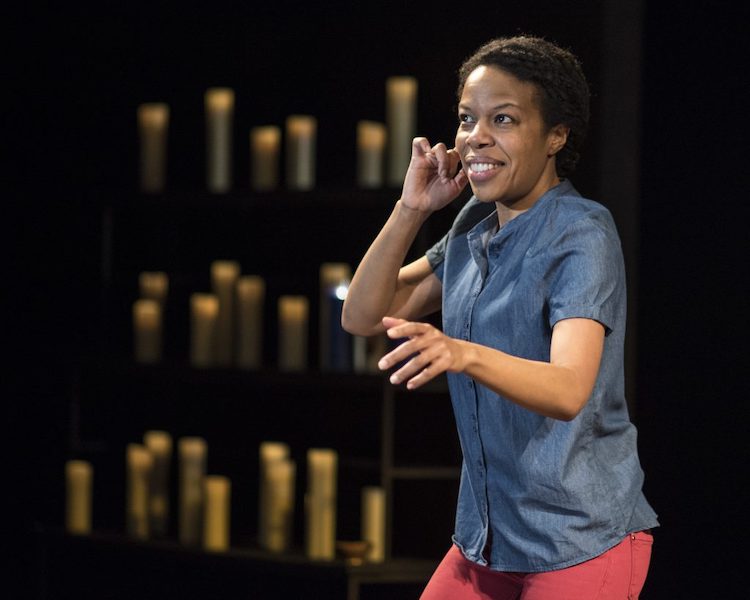 When Nilaja Sun tells us to take a deep breath at the beginning of the show, we willingly breathe with her. In one sense, “Pike Street” is a show about us. Sun, a consummate solo performer, draws us in and never lets us go. She takes us moment by moment through a hurricane with unforgettable people.

Like her character Evelyn, a hardworking mother on the Lower East Side of New York, Sun takes good care of us and of her daughter Candi. Candi is a talented 15-year-old girl who suffered a terrible brain aneurysm four years ago. Evelyn quit her job as an MTA subway conductor and devotes herself to taking care of her disabled daughter. When Sun becomes Candi, in the ebb and flow of unforgettable voices, Candi can only raise her tortured hands and twist her body—a transfixing moment.

In their run-down housing project apartment in the Puerto-Rican and immigrant neighborhood at the foot of Manhattan, Evelyn takes care of Candi and her rauchy, riotous father, Papi. She also puts up with Migdalia, Papi’s predatory and patronizing girlfriend. Evelyn has little to no income to take care of them all.  Each role is unique and intense, as Sun takes us to the depths of Evelyn, Candi, Papi, and Migdalia.

Multi-talented Nijala Sun embodies the whole neighborhood, including the hilarious Mrs. Rosenbaum, who cannot remember that MLK was killed or that Evelyn was born right there, and not in some foreign country.

When her brother Manny, a Marine, comes home from the war in Afghanistan, he is suffering from PTSD. Sun brings him, his friend, and his flashbacks powerfully to life, in an instant.

Nilaja Sun plays a host of characters, each one precisely delineated and full of explosive traits. They inhabit a vanishing world in a gentrifying neighborhood. If you’ve never visited that part of New York, Sun provides a jet flight to LES.

During the hurricane and on the phone, Evelyn debates wittily with the power company, Con Ed. As she points out, “Con Ed really IS a Con.”  Sun portrays the challenges of a poor mom in unforgiving, bubbling New York City, taking us on a real-life long-distance trip.

Lovable Evelyn is studying the healing arts, emulating her late mother Donna Lola Vega, who used to run a Botanica near Pike Street. Donna Lola Vega also tried to cure the neighborhood out of her herbal pharmacy. Nijala Sun carries on the art of healing, too.

Evelyn tries nobly to carry on, but that’s not easy in the daily hurricane that is her life. Everything costs now, including education, and these people are being forced to the wall. It looks like the hurricane of urban exploitation will come and sweep away Evelyn’s efforts.

It’s a touching and realistic portrayal of a Puerto-Rican herstory happening in Manhattan and right here, too. The powerful ending sticks with us—we take deep breaths, again, in unison.

Nijala Sun is a genius, an actor, and a beacon of sanity. Don’t miss Nijala Sun. Breathe.