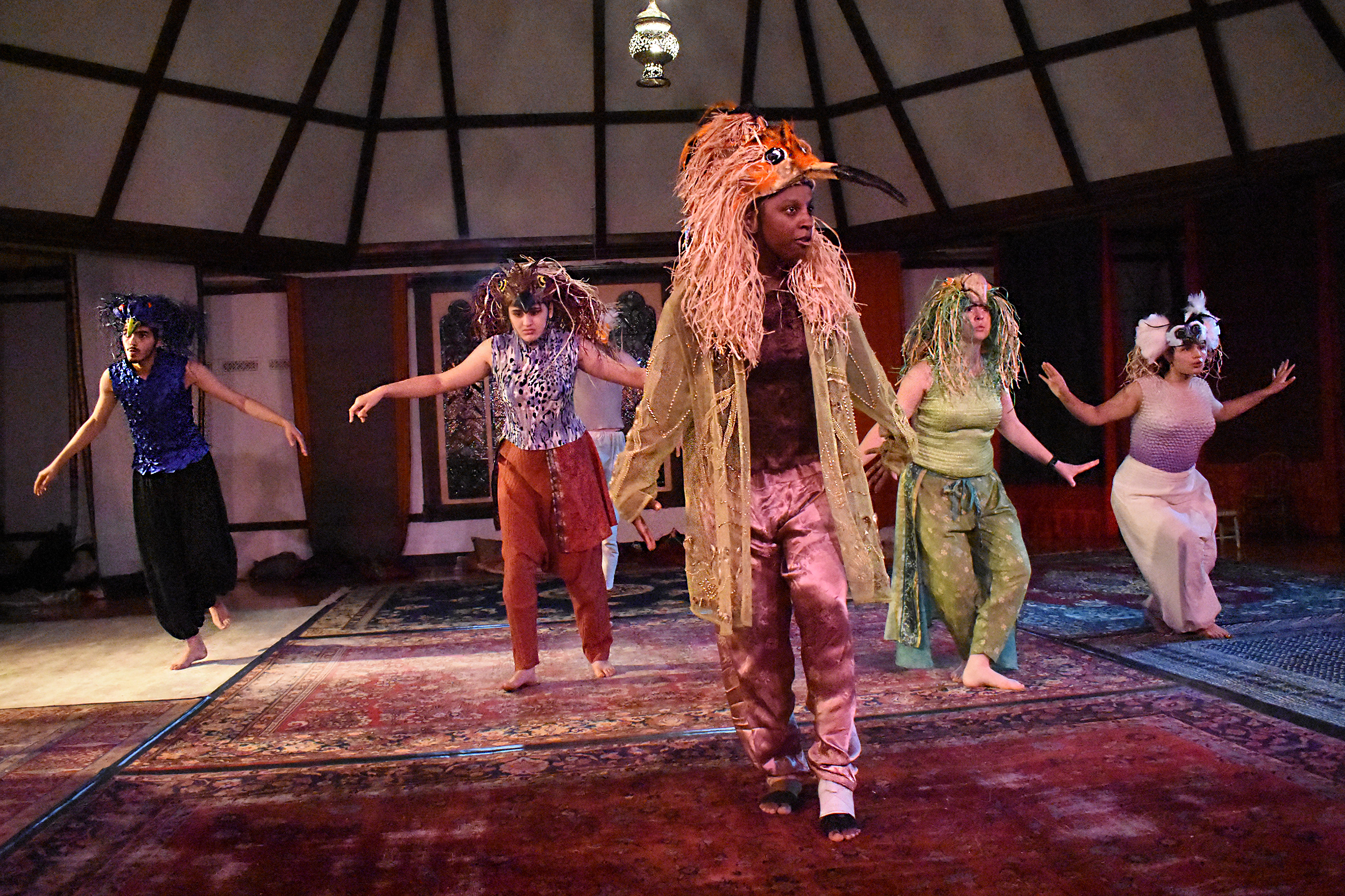 After filing up the long narrow staircase into the second floor aerie of the semi-abandoned Oakland church, we settle, quietly cooing as puffy jackets flutter to rest. Ubuntu Theater Project’s high, domed octagonal room emanates a special aura. The floor is covered in Persian rugs and incense may be wafting through the air. We wait like birds on a wire.

I really love a bird theme. Bird wallpaper, bird jewelry … they’re great animals! And “Conference of the Birds” was performed at my high school years ago, so I recall a poetic Sufi story of birds who gather to discuss the state of the world.

Ubuntu has co-produced this migration with Inferno Theatre and director Giulio Cesare Perrone. Their show puts introspective Sufi teachings on display, spiritually moving and entertaining for people of any religion.

After being persuaded by leader-bird Hoopoe (graceful, curious Ashley Jaye) in a fabulous big-beaked mask, they embark on a quest to find  the mystic Simorgh, to achieve enlightenment. The Parrot, Duck, Eagle, Owl, and others squabble and take flight, swooping the stage in a majestic circle formation.

When the birds ask questions, other birds respond with parables and folk tales, acted out in a storm of silky scarves. The bird-actors whip their green, pink, and yellow scarves through the air. When each bird’s story is told, the Poet/Narrator (regal Joshua-Morris Williams) steps in to recite the moral of the tale. We either cock our heads, or ponder its mystical truth.

Like  the flighty nature of people, some moments turn awkward in their staging, while others are breathtakingly magical. Musician Amir Etemadzadeh’s  hauntingly beautiful score features otherworldly singing and an emotionally-charged squeezebox. Annie Hallatt’s bird masks use exquisite details–unique and full of life.

Many performances stand out, including a VERY special Donald Trump impression (the best I have ever seen) and a hilarious sex scene acted out behind a thick silky partition-scarf.  In the flurry of costume changes and only a list of cast members, we cannot single out each actor-bird from the flock. They take wing and land all together, elegantly.

The fact that “Birds” is performed in a church fits the ancient Sufi teachings of the original poem. Like all exciting theater, some moments falter, but others take flight, leaving us feeling light as a feather.