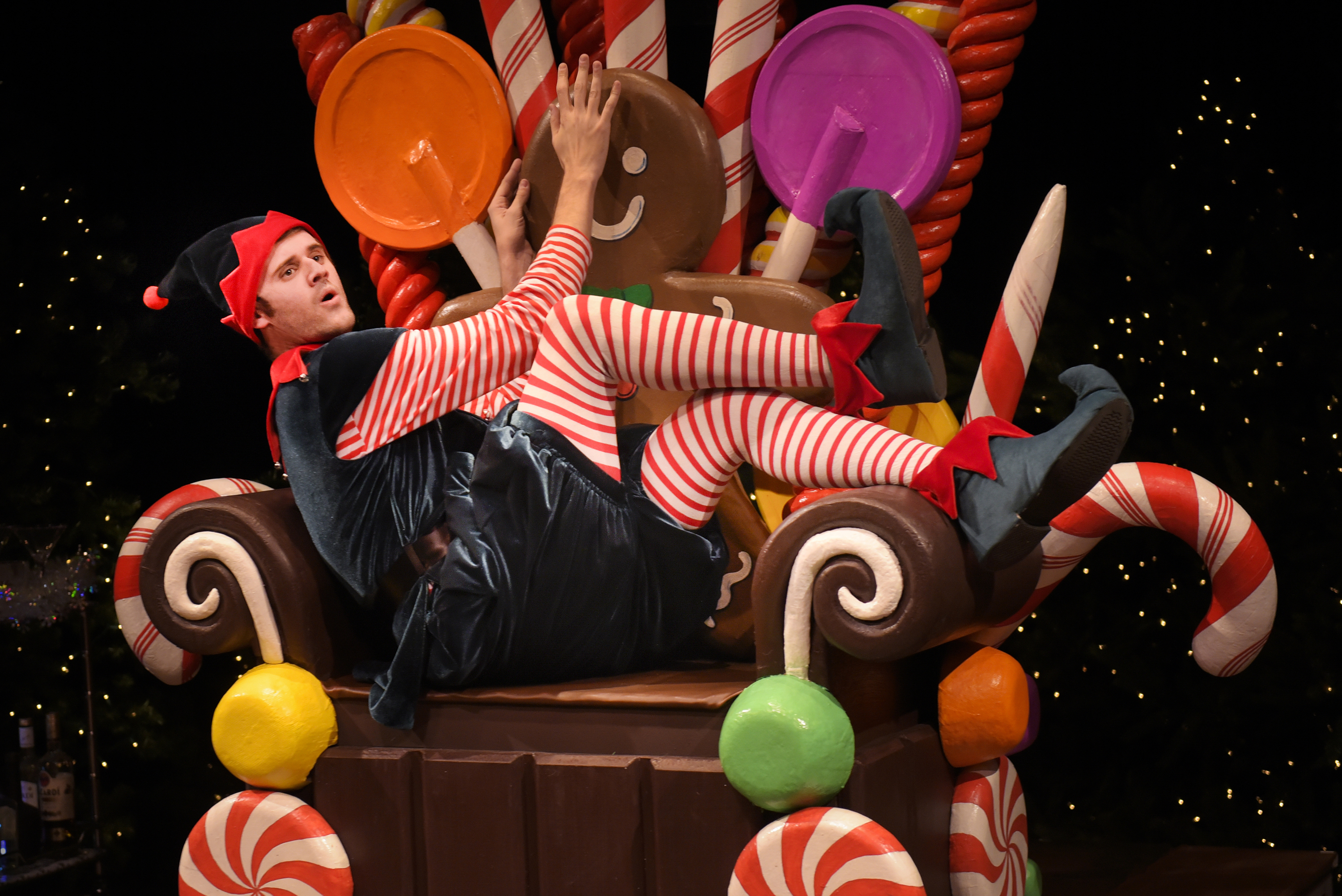 What better way to finish off the year than treating yourself to Joe Mantello’s dramatization of David Sedaris’ famous essay “The Santaland Diaries”? Brought to life by multifaceted star Max Tachis, this one man show pushes the boundaries of interactive and outrageous storytelling. Christmas may never recover.

Christmas themed madness ensues as Tachis transforms himself into not-so-jolly Elf, Crumpet. Tachis balances Elf school and dealing with actual dwarfs: “Who just get by their looks.” Crumpet, a modern day Grinch, detests the commercial glorification of Christmas, to the point that Santaland starts sounding more like “Satanland.”

Scenic Designer Christopher Fitzer creates a beautiful winter wonderland, with a stage  dominated by a throne made of gingerbread men and candy canes. Behind it, Christmas trees twinkle with iridescent lights like a Hallmark card, but with a self service cocktail bar. “The Santaland Diaries” goes beyond being funny–Sedaris takes us inside the Hell of working retail at Christmas. 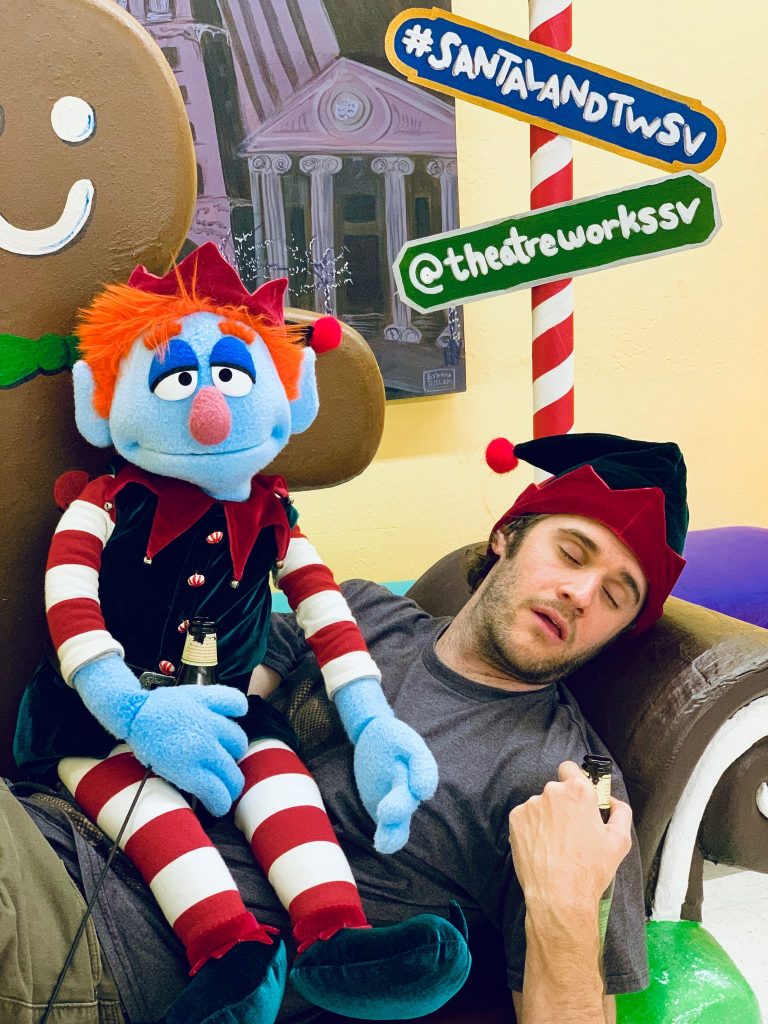 Director Jeffrey Lo hit an ace with Max Tachis, who sports a powerful stage presence. Tall, dark, and handsome, with a confident strut and a wide charming smile, Tachis wins our hearts.

Lo and Tachis hypnotize the TheatreWorks audience at Foothill College. We are only a few feet away from the small semi-circular stage, and Tachis includes us, askng for volunteers.

Tachis raps out Hamilton style lyrics, and his puppetry skills make him a Renaissance actor. As Crumpet the ridiculous Elf, he wears white and red striped tights and a velvety green romper, and fiddles with the pom pom in his cap. All the while, Crumpet casually sips cocktails. We have to laugh at this poor, overworked Elf, as he ushers kids in to visit Santa. 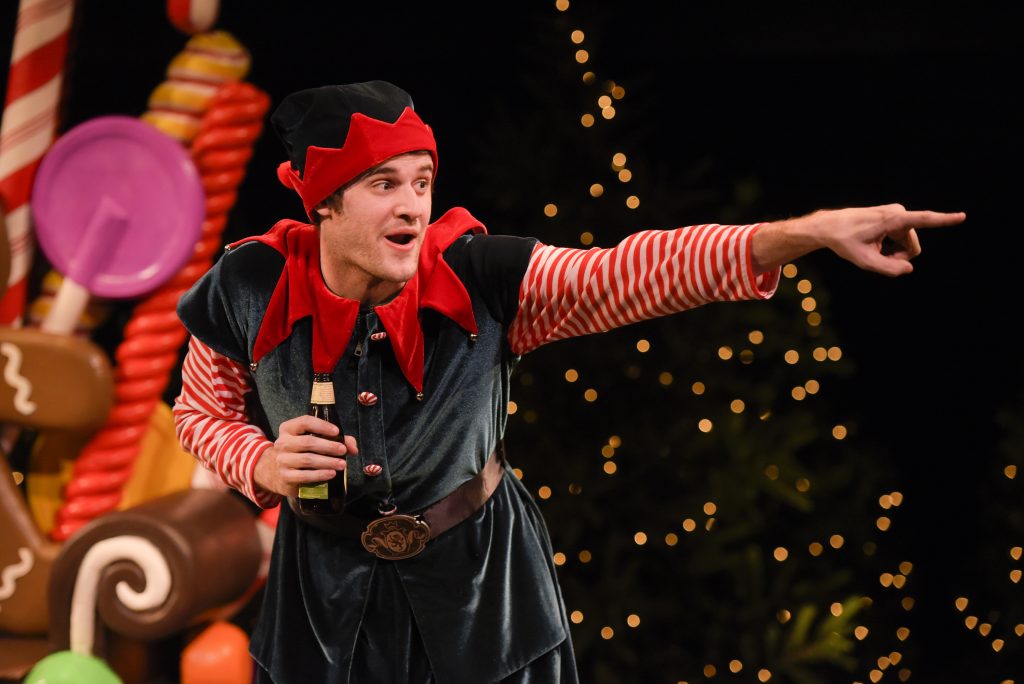 Sedaris shows that the holiday season can bring out the worst, too.  Crumpet makes fun of parents’ mob mentality, as they invade Macy’s. They fight over the family photo, and they spread dirty diapers through the mall. Funniest Elf ever.

When Crumpet recites his subversive antics at Macy’s, Tachis makes us feel we are listening to a good friend. And Crumpet shuttles a racist White family into the a line with a Black Santa. Sweet revenge.

Crumpet reflects one worker’s exploitation at Macy’s. We can see ourselves in his Elf, too.

“The Santaland Diaries” have a revelation for everyone, from Christmas lovers to naysayers. Don’t miss Max Tachis as David Sedaris, already an Alternative Xmas Favorite.