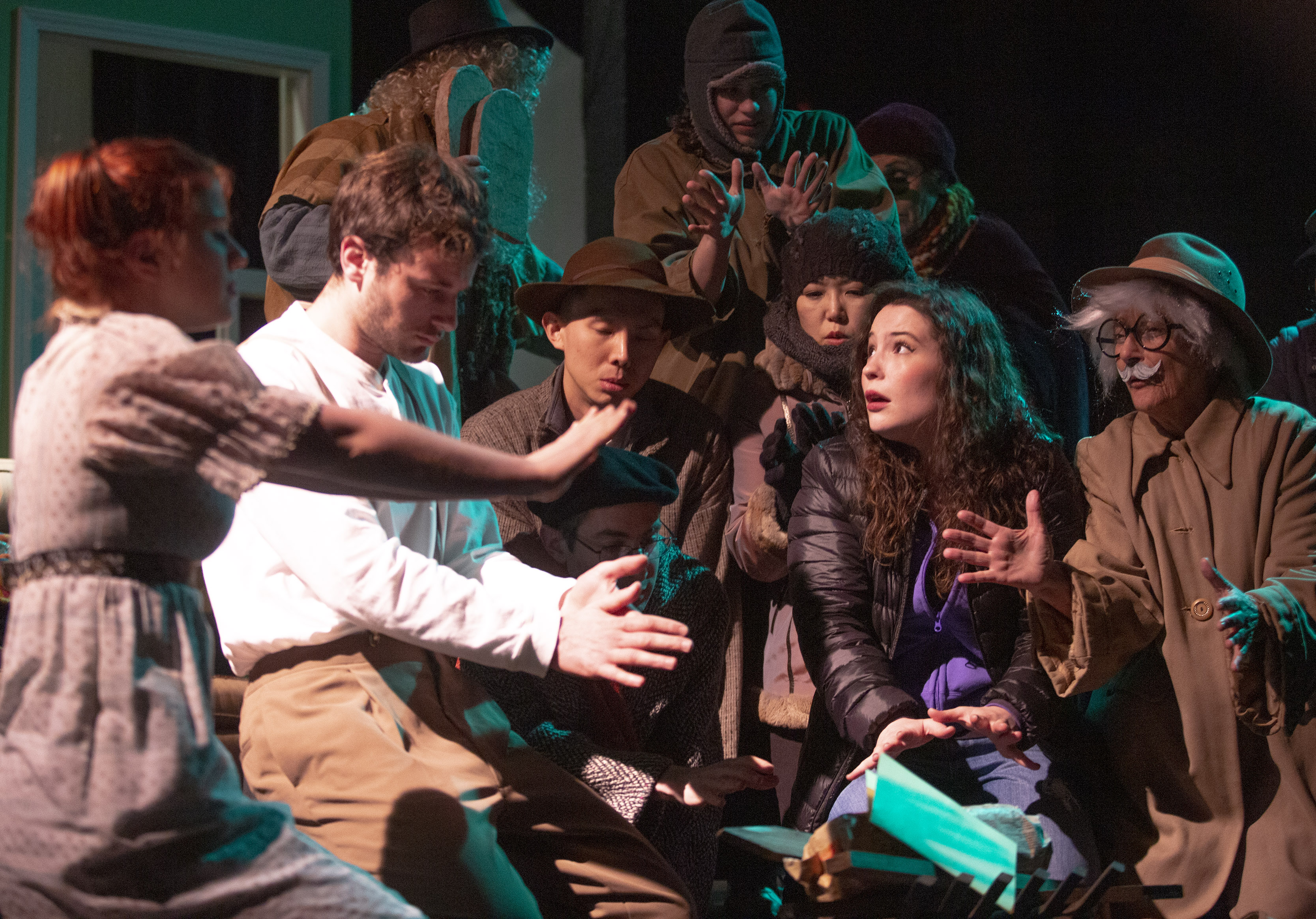 If the audience is laughing…they’re listening.     –V. Cate (playwright)

You’ve heard that laughter is the best teacher.  So, “The Skin of our Teeth” at Live Oak Park uses hearty laughs to reminds us about human oneness and empathy. The Actors Ensemble of Berkeley takes us a topsy-turvy journey through human history. And it’s hilarious. The glacier is coming, and it’s happening in Berkeley! “The Skin of Our Teeth” is a comedy for the ages–by the writer of “Our Town.”

In Thornton Wilder’s 1942 Pulitzer Prize winning comedy, the characters play actors in a play. Alejandra Wahl plays Sabina, the opinionated maid of the house, who constantly breaks the fourth wall to complain directly to us. She looks at the set and grimaces, unimpressed by the play she’s in—a splendidly unprofessional actor!

“Skin” is a comedy inside of a satire of U.S. life. Combined with Berkeley photos and jokes, Actors Ensemble has Berkleley-fied Wilder’s play. Yes, even progressive Berkeley is facing the end of the world.

Wilder illustrates the downfall of humankind’s noble intentions, as they are replaced by man’s ego.  “Skin” hides the truth in plain sight in his marvelous sci-fi satire. Sabina’s outbursts guide us through time from Bible history to the present, offering us the choice to end the world or nurture it.

It’s the Ice age and suburban couple George Antrobus (intriguing Kent Mannis) and Margaret Antrobus (lively Lisa Wang) are trying hard to run a “normal” American household. Mrs. Antrobus does her best in a patriarchal setting. But their comical pet dinosaur and mammoth have grown too big.

When George invites in a gaggle of homeless people, Plato and Moses among them, to take shelter in his house, he falls into a melodramatic depression. I love the dark humor as George goes into a childish Trumpean pout.

After all, Mr. Antrobus invented the alphabet, the wheel. And we meet his son, the Biblical Cain, now named Henry (bouncy Jake Soss). During his campaign for President, George is seduced by Lily (versatile Alejandre Wajhl, again), a reincarnation of the biblical Lilith in sexy red fishnet stockings.

In Act Two, the cast invites us to their chaotic and very funny last-minute rehearsal of a play about Time. The play within a play depicts Time passing from the Ice Age to the Berkeley present. The Antrobus family recites from Plato, the Bible, and Aristotle beautifully, and I snap my fingers in appreciation. They talk about humans being One on the planet: We aren’t meant to fight but to take care of each other in our mutual home, the Earth.

“The Skin of our Teeth” by Thornton Wilder, directed by Michael R. Cohen, by Actors Ensemble of Berkeley, at Live Oak Theater, through Saturday, January 26, 2019. Info: aeofberkeley.org