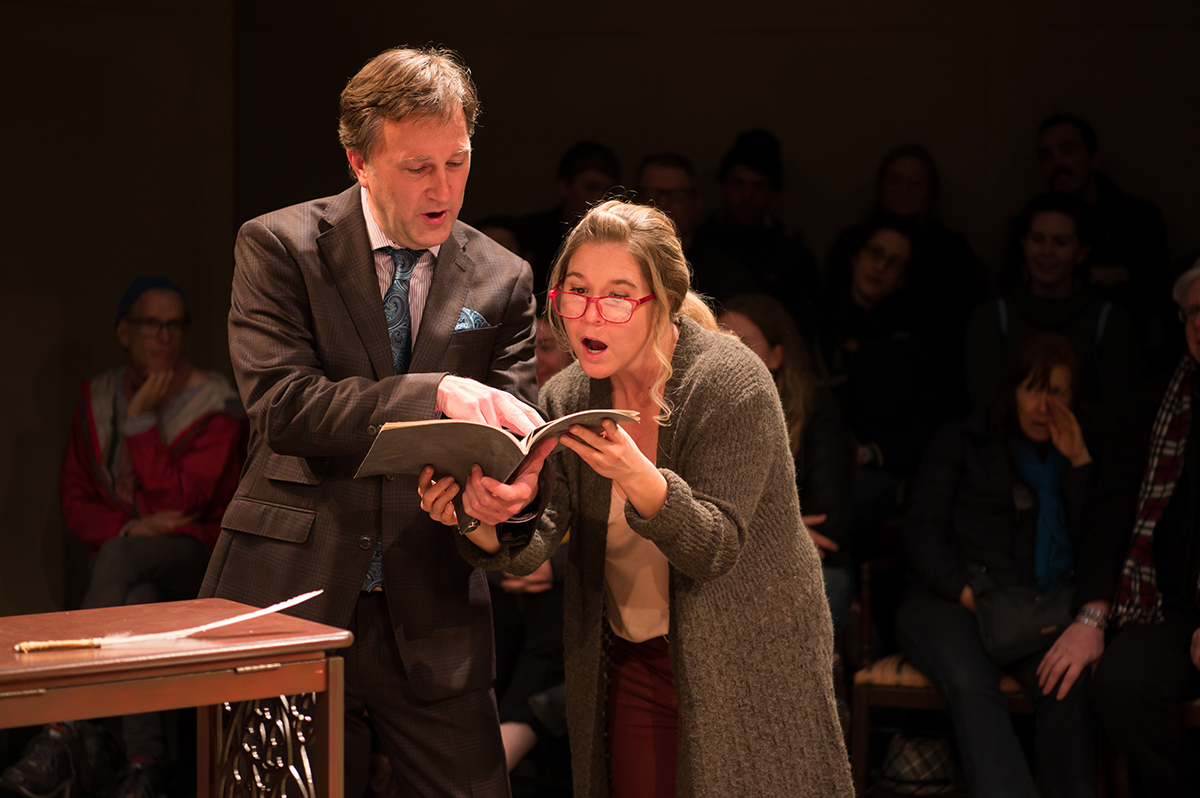 Tom Stoppard’s “Arcadia,” wittily directed by Patrick Dooley, pits history against fantasy, with scenes flashing back and forth between an elegant English country house in 1809 and in 1992. It’s a brilliant movie technique, transferred to the stage at Shotgun Players. In Dooley’s clever staging, people 200 years apart get to mingle and converse across time. We get to go Back to the Future–and to the Past.

In 1809, Septimus Hodge (masterful Max Forman-Mullin) is tutoring young Thomasina Coverly (spritely Amanda Ramos). When Thomasina asks, “What is carnal knowledge?” she sparks a debate spanning love, poetry, and mathematics. Forman-Mullin and Ramos imbue their intellectual sparring with charm and delight. They are a great pleasure to watch in their intellectual dance–fine wine in old bottles.

Pretty soon a serpent enters the garden. Septimus seduces the wife of a foppish Romantic poet called Ezra Chater (hilarious Justin Dupuis). Brazenly, Septimus argues with classical rhetoric, rescuing himself from Chater’s anger and a threatened duel. Chater finds himself at the mercy of Classical logic. The scene where Forman-Mullin debates and disarms his cuckolded accuser rises to the heights of Romantic versus Classical wit. A joy to behold, great comic chemistry.

We never quite know the truth and reality of the old seductions and debates. The enthusiastic love affairs rush forward at a heady pace. They flow by in beautifully designed 18th Century costumes.  Dooley’s intimate theatre-in-the-round holds our attention, hypnotically, as the two time periods bob and weave with each other.

Meanwhile, in 1992, academic hero and fool Bernard Nightingale (captivating Aaron Murphy) attempts to unravel the old Coverly secrets. There is a lot to follow and a lot to learn: Modern-day scientist Valentine Coverly (thoughtful, intriguing Gabriel Christian) struggles to connect with his elite family’s past. Valentine is obsessed with precise record-keeping on the estate. Christian perfectly embodies the hesitation and self-doubt of a modern thinker. His Valentine vacillates over the data, evoking our admiration and laughter.

Deception and debate dominate “Arcadia,” tickling us with scenes of repressed romance and modern manias. Never fear, the show ends happily with time-travelling couples waltzing together. “Arcadia” keeps us listening closely, guessing and wondering, delighting in the costumes, the style, and the superb acting.