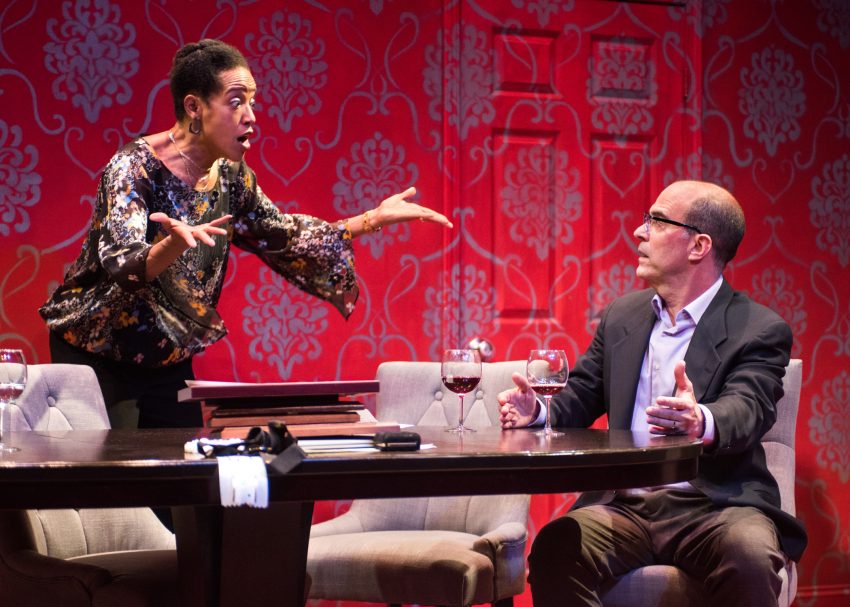 Canadian playwright Jordan Tanahill shows us that Canadians face the same problems we do. As two families battle over the suicide of a son, director Evren Odcikin grabs and holds our attention with wit, humor, and flare. His five superb actors deliver jewel-like characters who fill the stage with fascinating life at every moment.

Late Company” exposes the multiple roots of homophobia in the style of a gripping mystery. Like these two families, we are all complicit, clinging to our version of reality, and hiding the truth.

In “Late Company,” Tanahill presents two sets of parents: the reluctant middle-class Dermot family are arriving late for a tense dinner, bringing their son who is accused of bullying the dead boy, Joel.  The anxious upper-class Shaun-Hastings couple awaits them, full of trepidation on their part, too. The issue between them is Curtis’ bullying of Joel and homophobia, but it soon spreads to competitive masculinity versus the freedom to be yourself. Each actor develops a distinct personality for her/his role, and explosive surprises await at every turn.

Sulking high-schooler Curtis Dermot (brooding Baela Tinsley) admits to bullying Joel, and smearing shit on his locker.  Curtis draws us into his lurking misery. Joel’s death haunts him and her remembers how Joel flaunted himself and called everyone else a “faggot” to get revenge. Curtis is haunted.

As Debora Shaun-Hastings, the mesmerizing Desiree Rogers takes us through a mother’s grief and anger. Rogers magnificently embodies Debora’s bold, searching mind and her pain. Maybe Debora’s comical obsession with her metal artwork blinded her to her son’s struggles? Rogers’ every movement brilliantly expresses Debora’s self-criticism  and repressed fury.

Her husband, Michael Shaun-Hastings (powerful Lawrence Radecker) is a Conservative politician, who has plenty to apologize for. As the soul-searching develops, it sounds like he avoided his sensitive, gay son–and actually turned away. Radecker’s self-righteous husband and father still evokes our sympathy.

Debora yearns for the showdown and facts, but she is wading into murky waters. When she finds out the truth, she enters a Hell of pain. The shock of the play lies in the slow unfolding of how bullying works, how it can lead to tragedy, and how everyone is complicit in Joel’s suicide.

Wife and mother Tamara Dermot (explosive Cheryl Smith) insists that her husband and son attend the tense dinner-meeting. She tries hard to act proper and polite, with admirable restraint. But Tamara’s poise is an artful pose, revealed in her sudden assertion and explosion.

Bill Dermot (intense Kenneth Heaton) claims that Curtis is not to blame. Dermot argues, “We are coddling our children to death…they’re boys!” He believes that the well-to-do parents have failed to keep an eye their son, making him a target for bullies. Bill Dermot stands for a brand of righteousness, too. And his son Curtis maintains his edgy silence–until he, too, explodes.

Each character feels like a ticking time bomb. And they each propel us to unexpected depths, into their secret lives, and a shocking, thought-provoking ending. Tannahill fashions a high-tension showdown that burns like fire. The light it sheds is worth a second trip to NCTC to see “Late Company,” again.