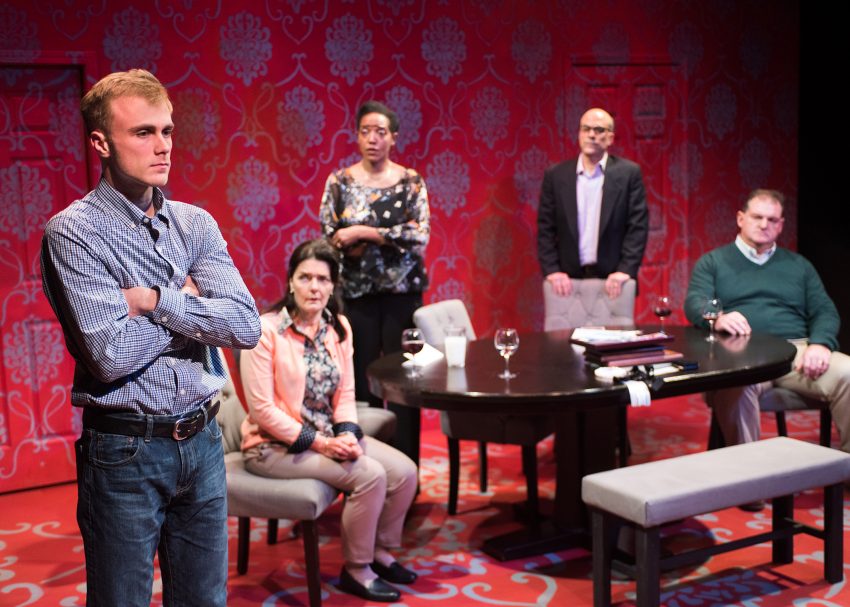 Sometimes, I lie in bed awake at night and imagine what might happen if one of my children were to die. It’s a fantasy that’s both terrifying and comforting—as if thinking of the worst could ward it off. Who would be there for me? How could I go on?

The idea of inviting the bully who drove my child to suicide over for dinner never crossed my mind. I would not expect myself to befriend that child’s mother, or to invite the boy and his parents over for pasta marinara. But that’s where Jordan Tanahill’s  “Late Company” begins.

Debora Shaun-Hastings, played masterfully by Desiree Rogers, paces and fidgets, waiting for her guests to arrive. The Dermots are 45 minutes late and her husband Michael (stalwart Lawrence Radecker) does not want them to come at all.

Tannahill establishes the Canadian setting right away: Michael is a Conservative Member of Parliament, and Debora is an witty, thriving artist; they are clearly top-tier Canadians. In the U.S., a conservative politician could not have a sculptor wife who creates giant phallic metalwork.

“Is this really a good idea?” Michael asks Debora. Already, Michael begins to undermine her project. Tension plays across Debora’s face, signaling their double grief. Their son, Joel committed suicide a year ago, and they are increasing isolated from each other. Sensitive director Evren Odcikin focuses us precisely on each character’s struggle.

At last, the guests arrive. The three Dermots enter through a bright red door, covered with the same deep red and blue motif as the walls. The pretentious dining room boasts a giant fleur-de-lis pattern, as intricate as Versailles, but lacking spaciousness. In the small theater, Kate Boyd’s garish set makes us feel closed-in, claustrophobic—a wonderful stroke.

The Dermot family, who are late to dinner, clearly come from lower down the social ladder. The son and father don’t want to be there, either. The roller coaster ride of being polite and then angry begins.

The accused teen bully, Curtis Dermot (simmering Baela Tinsely), sits beside his doting mother; he obviously feels trapped, too. Like most awkward teens, he wants to disappear completely, but also to assert himself in front of his overbearing father.

Director Odcikin tells me that Tannahill, a wunderkind of the Canadian theater scene, usually produces more fantastical and more assertively gay works. (Tannahill’s risque and artistic Instagram feed shows us his fantasy side.) “Late Company” stems from a tragedy that occurred in Tannahill’s hometown, where a gay teenager was bullied by his classmates, and killed himself. The play has become Tannahill’s most frequently performed work.

As a Canadian, my experience of the play is colored by the strange mixture of embarrassment and pride that comes with coming from a smaller, kinder country. The characters refer to particularly Canadian things: hockey parents, the TD Canada Trust Bank, the CBC, Loblaw’s grocery. While these icons hardly encapsulate the spirit of Canada (or even my personal interests), they stand for subtle differences between America and Canada that I’ve discovered since immigrating here seven years ago.

Tannahill illuminates the many lines that separate us. He shows how hard it is to recognize and operate across emotional and cultural barriers. “Late Company” engages us totally, as we share their conflict and see, finally, a glimme