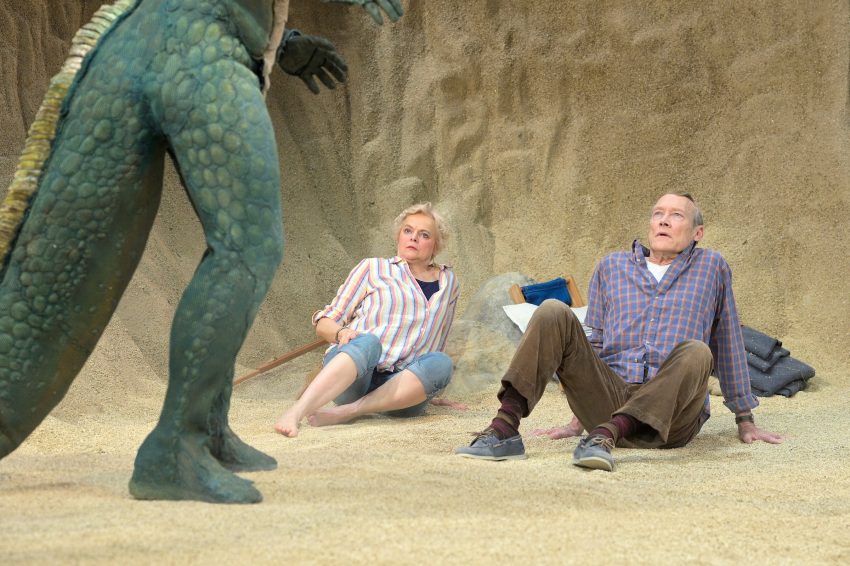 When giant, human-size lizards in glorious green and gold lizard suits show up on the beach and start speaking English, then we know it must be Edward Albee’s “Seascape.” There’s no escaping that primitive northeastern beach—it’s always with us, from the beginning of time.

Albee’s 1975 Pulitzer Prize winning play has always lived on the edges of his other major works. And yet, “Seascape” suggests a sweeping view of the world that harks back to underwater times, when the first amphibians emerged from the sea. And it casts us all forward to a future time.

Chatty Nancy (provocative Ellen McLaughlin) is needling her weary husband Charlie (intriguing James Carpenter) as they picnic on an isolated beach, talking over their well-deserved retirement. They sit, or in her case, run about on the strand of an enormous sparkling sand beach that appears gloriously on the vast Geary Theater stage.  Behind them rises more beach and brush, up a path and hill, and if you cast your eyes higher, you will see the bare bones and bright lights of the stark theater, itself.  “Seascape” goes deep and goes high—from murmuring sea to unseen sky.

Nancy, a lovely older woman with lots of class and verve, wants to explore all the beaches of the world. She prods poor resting Charlie, insisting that they must go and explore the great beaches, become beachcombers. Patiently, Charlie humors her, resists her, and gives in to her. Clearly, she needs a project, and he want some rest–delightful, witty couple.

Their hilarious struggle on this isolated beach between us and the bare theater rafters resonates—active versus passive, enthusiastic versus satisfied, yearning versus repose. Consummate director Pam MacKinnon, awarded for her Albee work, has managed to leave the canvas open. MacKinnon and superb Scenic and Costume Designer David Zinn present a bright sunlit day at the beach for us to ponder.

The plight of these two bickering and self-aware people makes us think of the best of our kind, how closely we are related to the smart, successful couple on the glittering strand. Three or four times, a giant aircraft thunders through the air, shaking the lights and the calm. The loud, realistic roar dips low, lights flicker, and the man-made world intrudes deeply into Nature.

You cannot prepare for these moments—they suggest what we have done to the Earth and what man-made creations are doing to us. Edward Albee and Pam MacKinnon work their magic like that swooping, dangerous airliner.

In Act Two, when Nancy and Charlie engage with the creatures from the sea, the fun really explodes. The glorious giant lizards are wonderfully embodied as assertive male Leslie (bold, resonant Seann Gallagher) and peacemaker female Sarah (wary, wise Sarah Nina Hayon). Gallagher and Hayon in their flexible, sensual, green and gold lizard-gear run off with our hearts. As Leslie and Sarah, they evoke fear and loathing, sexuality and sensitivity, and finally, emotions and caring. Only Albee can combine social chit-chat with Darwin’s Evolution and modern philosophy. We delight as the species explore life after ooze.

Race and racism are only one of the topics that emerge in the brilliant, funny conversations between species. Now, lizards from the deep—there’s a racial divide that could have some meaning—but no, it doesn’t really—because we all emerged from the deep. And giant lizards could use some help in understanding how humans treat their babies, how living in air operates, and what are emotions, what is love?

It’s Albee at his best, taking our hand, step by step, as we cross the species barrier, and begin to comprehend other kinds. We understand the common sea that we came from and the air that we share. Bravo Albee! Bravo MacKinnon!