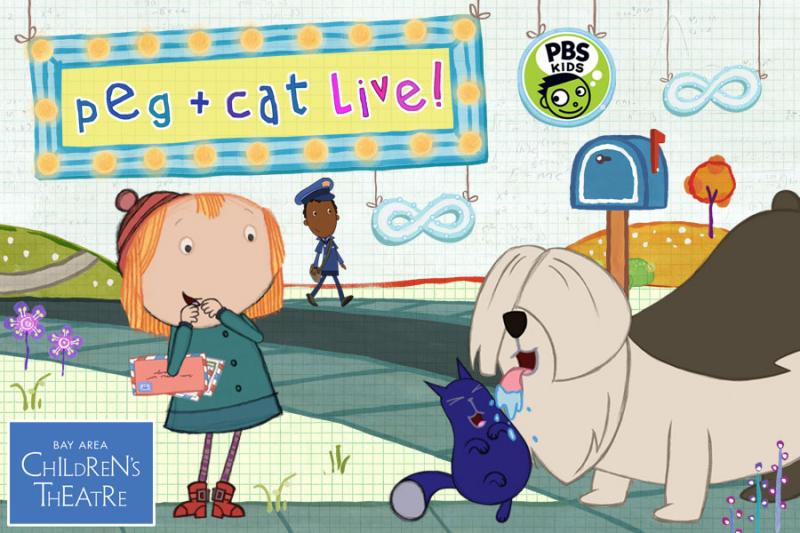 It isn’t until I sit down in my seat and strike up a conversation with a six-year-old named Maddy that I learn that “Peg + Cat” in Castro Valley, California is actually a PBS television series.  “Watch the ‘Tree Problem’ episode,” Maddy tells my daughter, Itasca, and me.  Her mother smiles and gives me a wink:  “It’s educational, so you don’t have to feel guilty about screen time.”

And with that, the lights dim and on walks the energetic and diverse cast.  First comes Peg, played by the zippy Amber Dickerson, who has a high, fun voice that the kids in the audience resonate with.  Next comes her partner in crime, the Cat, played by a very tall, Zachary Hasbany, who slinks around the stage like a Russian Blue.  It’s when Mom—the versatile Leah Sanginiti–enters that we start to understand the premise.  Peg and Cat have to deliver some very important letters to the mailbox.

There is a very big dog between them and that mailbox.  Really, the dog is a highlight—a gigantic, white puppet with a woman inside, Brittany Law, who somehow manages to evoke all kinds of emotions.  She scratches, jumps, nuzzles, reels back in surprise, and even licks her chops.  I found myself wondering just how she had arranged herself inside the puppet.  It’s a feat to behold, for sure.

Giving the play its structure is Ramone, played by the captivating LaDareon Copeland, whose singing voice crescendos throughout the play to the last number, where he booms like an opera star.  The music is great and fun, and every actor has a distinct and beautiful voice that makes this musical a joy to listen to.  Like Maddy and her mom told me, it’s an added bonus that the play emphasizes math, shapes, and colors, but it’s never heavy handed and never feels like some kind of “educational theater.”

If you want proof that this show is worth catching on its current national tour, know that my squirmy 11-month old, River, sat through the whole thing on my lap, transfixed and delighted by the movement, colors, characters, and music.  And Itasca now has a new favorite PBS show.

But no matter that it’s an adaptation.  I’d watch the live, theatrical version by Bay Area Children’s Theater any day.