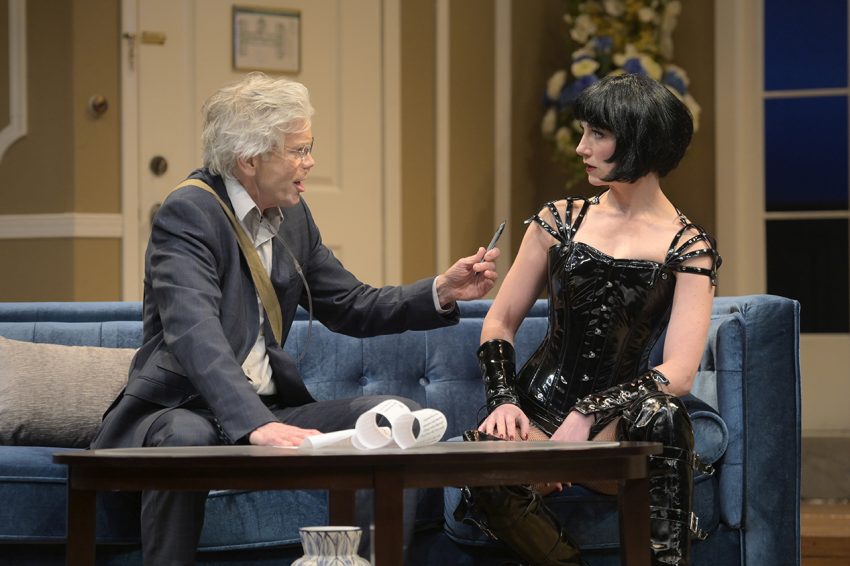 In Center Rep’s production of “Communicating Doors,” three valiant leading ladies evade a murderous business man by hiding behind the communicating door of a posh hotel suite.  But, this communicating door doubles as a time machine, transporting them twenty years into the future or  the past—to 1983, 2003, or 2023.

At two hours and 30 minutes, wildly popular British playwright Alan Ayckbourn takes his time to spell out the convoluted time travel plot. But his roomful of intriguing characters keep the laughs coming, thanks to a cast full of the Bay Area’s finest actors.

Reese wants Poopjay to witness his confession to the murders of his first and second wives. It seems that billionaires, past and present, think they can get away with murder.

When Reece’s cold and severe business partner Julian (menacing, funny Robert Sicular) tries to kill Poopay, she hides behind the time-traveling door. Much to her surprise, she swooshes back decades to the night that Reece’s first wife, Jessica was murdered. So, Poopjay decides to warn Jessica of her impending fate.

As Jessica, Brittany Danielle is hilarious and adorable, playing the ditsy-blonde archetype with flair and intelligence. As second wife Ruella, Julie Eccles commands the stage with leading lady energy. Along with Rietkerk, the three ladies make a fine trio of avenging angels, worthy of any cop show.

When all three bustling ladies end up in the present time, high comedy erupts. They pace the posh hotel room, trying to figure out how to prevent their murders in the past. The three women exhibit fabulous physical comedy skills as the dash around the room, and the audience roars with laughter.

Director Michael Butler has orchestrated a delightfully entertaining farce. The story clips along at a quippy, impressive pace, and the actors are  absolutely charming. “Communicating Doors”  delivers a silly, endearing romp through time. It makes me think about how I can change the past and the future. Perfect for a family night at the theater, and an excellent pick-me-up for a rainy Bay Area winter!