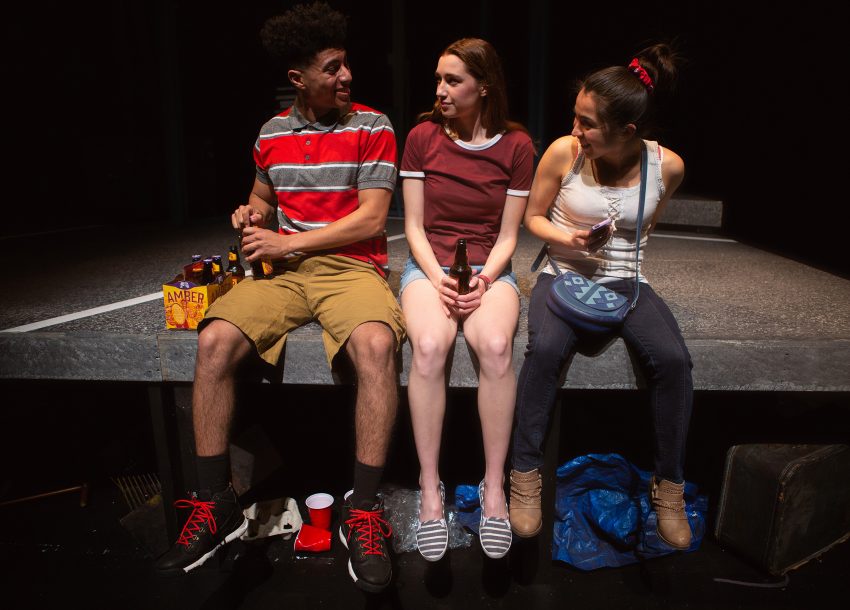 You know Belle’s restless feeling in Beauty & The Beast when she sings “Little People” at the beginning? Like Disney’s Princess Belle, high school senior Blaze (animated Isabel Langen) longs for adventure. Trapped in a trailer park on the Gulf Coast of Louisiana, she wants to change the world.

In playwright Chelsea Marcantel’s “A White Girl’s Guide to International Terrorism,” Blaze learns to fight domestic terrorism in the U.S.

Blaze knows about economic abuse in America. She knows rust-belt civilians shouldn’t have to spend their lives working in an unfulfilling job. She knows hard work should pay off, but it doesn’t work out for her honest, rigid, single mother (sincere Arwen Anderson).

Teenage Blaze feels misunderstood and superior to the “small-minded,” conservative townspeople around her. As Belle sings, “There must be more than this provincial life.” Blaze takes to YouTube to unleash her frustrations by recording and posting her own hilarious, angry rants. She comically complains about the people in her trailer park referring to her as a raging liberal with a superiority complex.

In one of the videos, Blaze, dressed in all black, holds a fake AK-47. On YouTube she impersonates famous radical feminists. We see her filming on her smart phone; while simultaneously, Projections Designer Wolfgang Wachalovsky brings her finished video to life on a big projection screen–a wonderful effect.

On the videos, Blaze imitates women whom the FBI would call terrorists. Her eccentric videos attract hungry ISIS recruiter Wafiya (cool Liz Sklar), who makes Blaze feel wanted and useful. As Blaze, Isabel Langen cracks me up with her wild characterizations. I’m shocked that she’s down with the violence, claiming “a warrior doesn’t need to apologize when God is on her side!”

When FBI Agent Salem (thoughtful Mohammad Shehata) interrupts with monologues about catching vulnerable young Americans, his interjections feel like a nuisance. But as Blaze and Wafyia become closer, I start to pay more attention to his Agent Salem.

Trembling with anger, Salem claims that if Blaze were a little brown boy, they would have arrested him already.

Marcantel’s natural and poetic conversations get into my heart.  When an FBI agent explains that people can have empathy, but they can not feel the same as someone else,” I realize that Blaze is sincerely empathetic. Sometimes I think little White girls are oblivious to their privilege—even if they live in a trailer park.

Maybe one day Blaze will know what people who look like Agent Salem feel, and fight for them, too! Hey, restless White girls, we need your spunk here in America– Brown & Black kids can’t do it alone.