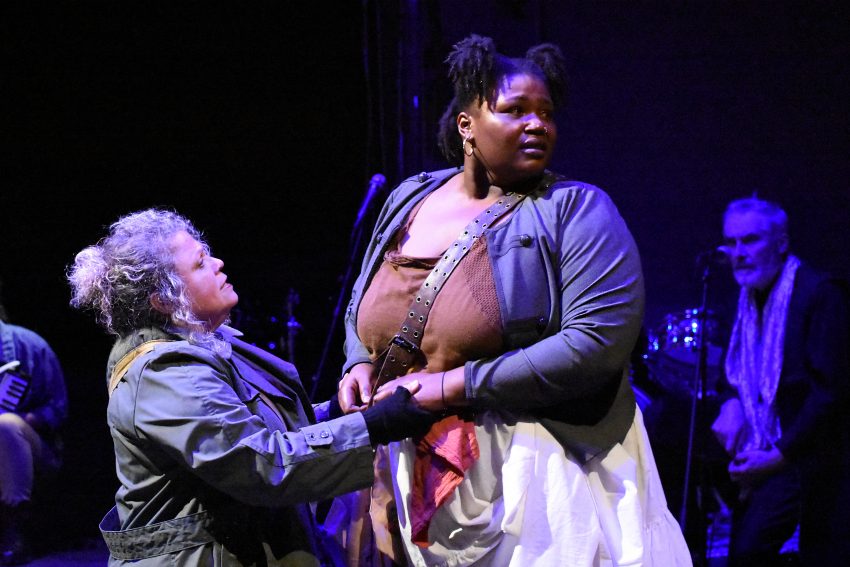 “It’s a blessing to be dumb,” says Mother Courage (Wilma Bonet) while kissing her youngest non-speaking daughter Kattrin (Rolanda D. Bell). When I hear this, I remember being blind to the monstrosities of our world, especially war. War is for the politicians, but what about the common folk? Aren’t we safer dumb and quiet—or, will complacency kill us?

East German playwright Bertolt Brecht focuses on war, itself, rather than people in “Mother Courage” (1941), in a documentary-style. In Ubuntu’s version, at Mills College, in Oakland, I was captured by the stoicism of Courage’s mute daughter Kattrin, by the inventive Rolanda D. Bell.

When vicious bandits attack Katrin and look up her skirt, she whimpers, using her hands to plead for understanding. All her self-concerned older brother, Swiss Cheese (Kevin Rebultan), can say is: “It sounds like you’re saying something important.” And he walks off, a sacrifice to his mother’s desperate haggling. According to Mother Courage, Poland at war scared timid beauty Kattrin so much, she turned mute.

Mother Courage, determined to profit from the Thirty Years’ War in 1631, runs a ragged, rolling canteen wagon, charging top dollar. Kind of like our gas prices, here. We have no sympathy for Mother Courage, and even Kattrin is complacent because she has been trained to shut up and suffer—the price of business.

While Mother Courage haggles from her merchant wagon of pipes, pots, and pans, Kattrin calmly crochets, smiling—business as usual for war-traders. Whenever she is attacked, I feel her silent outrage.

As Kattrin, Rolanda D. Bell creates pathos and pity. When her eldest brother, naïve Eiliff  (bold Kenny Scott) is tricked into joining join the war, Mother Courage rages and slaps him! Courage profits from the war, and lives in fear; while Kattrin’s watchful eyes send anxious energy charging through us.

Set designer Nick Benacerraf’s merchant wagon resembles a deconstructed royal carriage. When we first meet Kattrin, she rolls up in the wagon pulled by her brothers, beat-boxing—like a queen. But soon, the skeletal cart gets in my way, so I stood for the second act.

On a mini-stage with drum, guitar, and three microphones, the actors sing monologues,  Karaoke style. But I could barely understand the words in the echoing acoustics.

Although Bell cannot carry all the action without lines, she keeps me grounded. When Kattrin finally finds a voice by furiously banging a drum, she inspires us to resist daily horrors, today: 45 wants to build a wall, but Flint still lacks clean water. Like Karina, we are trained to be distracted and silent.

Brecht moved to Hollywood from Germany during WWII, but he didn’t let Hollywood train him to be complacent. He fought against complicity with outrageous spectacles like “Mother Courage.” Brecht eventually fled the U.S. and the Red Scare, because he could not maintain his silence.