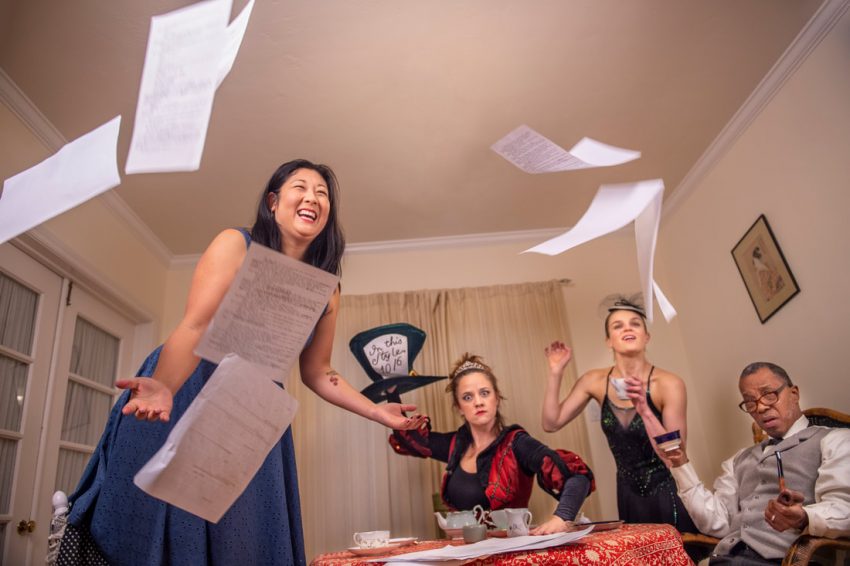 Tea parties, real or imaginary, usually feature wit and polite manners. But Anne Yumi Kobori’s tea party features a clinically anxious Alice (of Wonderland fame) and a clinically insane Mad Hatter (of Wonderland infamy). The wit may still be present, but manners are quickly thrown out the window.

Alice’s friends cycle in to join the party: pragmatic James (Ben Euphrat); mute Isabel (Jessica Uher); and Alice’s boyfriend, you guessed it, Peter Pan (Joshua Marx). We quickly learn that Alice and Hattie are hosting their party in a mental hospital where both are patients. They are presided over by the cavalier Dr. Avshalom (Norman Gee).

Focusing on Alice’s coping with trauma, “Every Day Alice” still leans into its zany side. Kobori embraces the fun of Alice in Wonderland, while confronting the insidious nature of mental illness.

Each character has a fairy tale persona and another in “reality.” For example, the rigid Doctor brilliantly becomes the worrisome White Rabbit. When Alice and the gang set sail on a pirate ship and drink in exotic taverns with childlike glee, I could almost forget the dark currents swirling underneath.

Kobori’s play works best when she embraces fantasy and uses it to confront mental illness. One of the best, and darkest scenes focuses on Alice’s grappling with taking her prescribed medication. As she stares at her pill, James, Isabel, Hattie, and Peter swarm, in full fairy tale frenzy. Surrounding Alice menacingly, they manipulate her into “doing what she is told,” using caustic attacks on her insecurities. When she gives in, the demons drift off, for now.

“Every Day Alice” revolves around Alice’s belief that she wakes up a “new” person every day.  She reiterates a line multiple times, to both Peter and James, that she doesn’t know if she loves them today, but she’s sure she will tomorrow. This line seems selfish, and maybe it is, but it reveals Alice’s crippling identity crisis—with one foot inside “reality” and one out. Where are those ruby slippers when we need them?

By confronting deep emotional and mental issues frankly, through a veil of fantasy, “Every Day Alice” is refreshingly inventive but also limiting. We want to see more of the dark roots of Alice’s illness and more of the raucous fantasy interwoven. When Kobori melds reality with fantasy, she achieves the sublime. More plays need to take the risks that “Every Day Alice” does here.