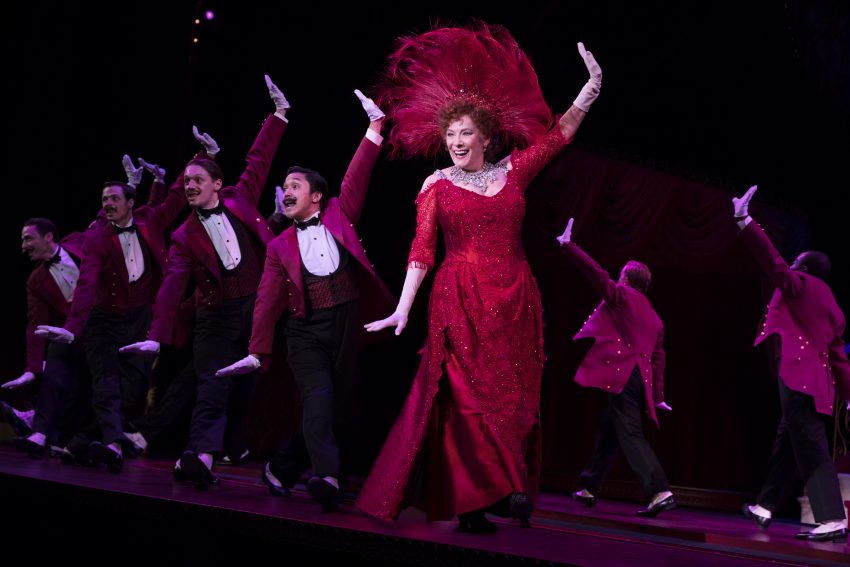 “It’s going to be so colorful,” a woman gushed before the curtain rose on “Hello, Dolly!” starring Broadway legend Betty Buckley at SHN’s Golden Gate Theater. “Colorful” is putting it mildly.

Just when you think screwball comedy is her greatest asset, Buckley switches smoothly to drama, pleading with the spirit of her first husband to let her return to a full, rich life. She has been emotionally numb since he passed away. These variations of hilarity and reflection leaves us with a full, soulful satisfaction.

Back in New York, we meet two unlikely matches for Cornelius and Barnaby: young widow Irene Molloy (glowing, mischievous Analisa Leaming) and scandal-loving Minnie Fay (Kristen Hahn). The tables turn as Cornelius and Barnaby find themselves trapped in Irene’s hat shop—precisely when Dolly conspires to ruin Irene’s chances of marrying Horace. The farce and wit had me giggling out loud.

The music soars, and the live orchestra complements the stellar cast’s superb voices. Drama, music, and showmanship climax at infamous Harmonia Gardens Restaurant, where waiters leap and dance like acrobats. The men catch flying plates and turn platters into percussion: their sheer athleticism and precision thrill us.

In this era of #metoo, I wondered whether the plot and the dialogue about matching wives and husbands would feel dated and sexist. But the writing holds up, and  becomes more satirical, bolstered by first-rate acting. It’s abundantly clear that women hold the power. Go say, “Hello!” to Dolly while she’s visiting San Francisco. A must see for lovers of great musicals.