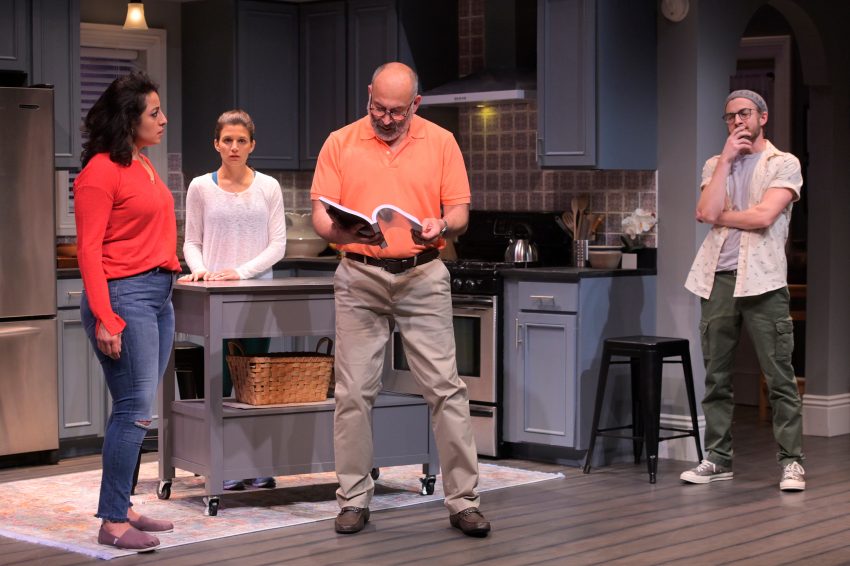 Set in Atlanta in 2013, “The Who & the What” focuses on a traditional Muslim father, Afsal (dominating Alfredo Huereca), and his two rebellious daughters. Though the younger pretends to conform, the elder expresses her objections to male rule openly.

Older sister Zarina (impressive Denmo Ibrahim) and her sister Mahwish (convincing Annelyse Ahmed) are bullied by their strict, religious father. He could be any demanding, self-obsessed dad, but he happens to be Muslim.

The set boasts a wonderful working kitchen, straight from Ikea showrooms, complete with running water. Crown molding and carpeted stairs depict a modern, comfortable home in Atlanta. While Zarina chops vegetables for a salad, Mahwish chides her about sex and love. The scene depicts funny, yet convincing family rivalry. The setting and wit between sisters is delightful, and makes us feel at home.

In playwright Ayad Akhtar’s Pakistani American family, Zarina, shines as a writer and philosopher, with an MFA in Creative Writing. She’s more than a match for her angry father. Years ago, she allowed her father to reject her non-Muslim boyfriend.  But now, she regrets giving in, and she won’t do that, again!

Zarina is secretly writing a novel about the life of the Prophet Mohammed, essentially re-interpreting the Koran. In her research of the Koran, she has discovered the reason for the Muslim veil and hijab—and rejects their validity.

When Zarina’s father tricks her into meeting a smart and charming Muslim American named Eli (dashing Patrick Alparone), they have an awkward meeting at a cafe. Alparone makes a worthy suitor, filling the role with grace and depth.

But dramatic tension falters because Zarina’s character in this script goes only so far. Talented Zarina is pursuing her desire to understand, to question, and to express. But, considering the sacrifice she made for her father, we want to know more. There is ample comedy but the script could be filled out to make a fully rounded play–perhaps with a nice intermission to allow room for that development.

When the father rants, he breaks the connection to his daughters. The words sound right, but anger makes the sentiment ring hollow. The crisis comes when the family’s secrets and lies explode in their faces. Zarina’s published novel causes a rift that’s hard to heal. But we need to know more her,  about that book, and its reception by other Muslims. Zarina is still trapped in her father’s religious delusions. We want to know more about her.

“The Who & the What” tells us more about a patriarchal father than about these women’s roles in Islam. We’ve seen this kind of deluded tyrant before—he’s in the White House, too.

Overall, it is an enjoyable comedy that will surely work out the kinks as it continues its run. What the script lacks, this production supplies with talented, engaging actors.

“The Who and the What” by Ayad Akhtar, directed by Hana S. Sharif, at Marin Theatre Company, Mill Valley, California, through Sunday, March 24 , 2019. Info: marintheatre.org