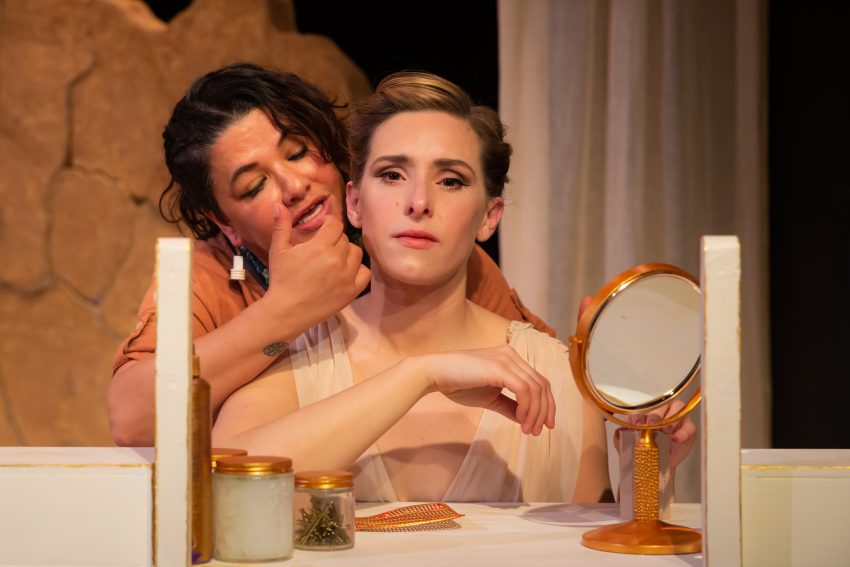 Ellen McLaughlin’s modern adaptation of Euripides’ “Helen” boasts poignant messages about beauty, fantasy, and war. Prone to soliloquy “Helen” challenges us to stay engaged. Luckily, the actors give stellar performances to pull us back into the nightmare scenarios of Beauty and War.

Helen (talented Adrian Deane), the most beautiful woman in the world, has been living in a hotel room in Egypt for 17 years. Like Rapunzel in her tower, Helen is waiting for someone—her husband Menelaus (captivating Steven Flores)—to rescue her.

In her exquisite Egyptian modern/mythical hotel room, Helen paces a coppery gold floor.  Swaths of transparent lavender fabric drape the walls, while gold-lidded jars adorn the gold-trimmed vanity. Even the oft-used fly swatter is gold. Set designer Randy Wong-Westbrooke intrigues us by including a gold-trimmed floor-model 50s TV set and white 20s telephone. These outdated conveniences lack useful channels or a dial tone, making the parallel between age and usefulness.

Helen embodies our fantasies: “When they stared into me, I showed them their dreams.” Like Audrey Hepburn, folks are infatuated, and endow her with qualities they yearn for. They do not see her as an individual.

Helen realizes that Menelaus is also vulnerable, asking if he prefers the “copy” of her with whom he has spent many years. The copy emulates only Helen’s physical features, yet her husband loves the substitute. He gets what he wants—a docile, unflawed clone.

Powerful Athena (delightful Stefani Potter) comes right out of Star Trek. Maybe Star Wars. Like a patron of an underworld bar on Tatooine, she dresses in combat boots and parachute-type pants. She dons heavy eye makeup forming a Zorro-like mask that spreads into her lustrous hair.

In a long-winded, yet animated speech, Athena explains that the war, fought in Helen’s name, took 10 years. “Who could keep interest?” she poignantly laments. She goes on to complain that whole cities were wiped out for the “concept” of Helen. But Helen was not there.

The parallel to the US war in Iraq over weapons of mass destruction is undeniable. Her sentiment, shared by many regarding the war in Iraq, that “it seemed like a good idea at the time” comes only hindsight.

Are the long-running U.S. inspired wars in the Middle East the secret behind “Helen”?  Theatre of Yugen’s stunningly designed piece plunges us into an intimate puzzle.