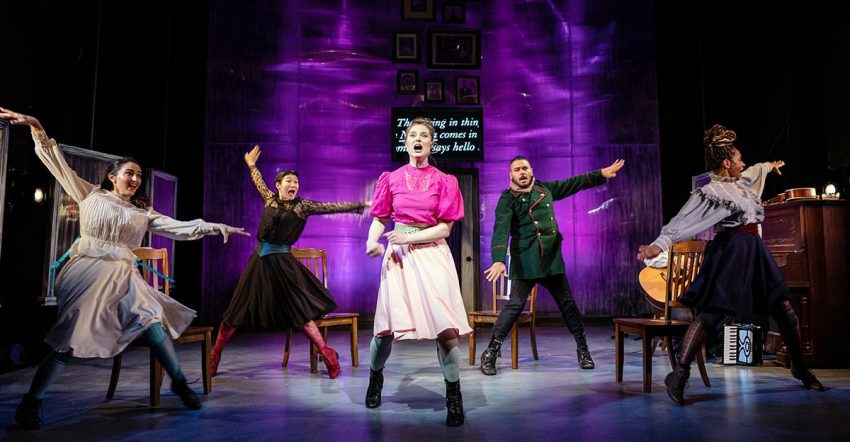 ‘Kill the Debbie Downers! Kill Them! Kill Them! Kill Them Off!” illustrates how vulnerable we all are. The energetic singing, dancing, leaping cast invites us to a Big Party! Set Designer Mikiko Uesugi has remodeled Shotgun Players’ intimate stage to look like a meat locker.  Three windows hang precariously, their silvery tint fogging any view. The grey and brown industrial set is cold—a century is ending.

The only warmth comes from an antique grand piano, reminding us, that this is indeed an old country house.

Shotgun Players’ new ‘theater piece’ invokes Chekhov’s tragi-comic 1900 “Three Sisters,” employing the old, the new, and the fearful.  Co-directors Mark Jackson and Beth Wilmurt explore past Czarist oppression and future liberation in timely, poignant waves. They reach out to us with visceral movement, powerful songs, and images of pain.

School Teacher Olga re-enacts one scene three times; her body language, tone of voice, and facial expressions make each one fresh. Masha, a seductive, dancing queen, crawls across the floor, reminiscing—she wants her man back.

Stuck in the past, the Three Sisters yearn for Moscow, for city life. Their socially awkward city-based sister in law Natasha (dorky Amanda Farbstein) adds to their envy. Watch for a single accordion, a butcher’s knife, and tying a cherry stem with your tongue—like circus marvels. But the multi-talented crew sings, dances, and leaps into the air to express frustration—it’s the end of old ways. A revolution is coming.

Soldier Solyony (intimidating Nathaniel Andalis) suffers unrequited love for Irina. His fears force him to remove any rival, including a fiance and father. Solyony spritzes his hands with antiseptic to remove the smell of death.

Out of frustration, Solyony brandishes a massive butcher knife to cut off the offending appendage. As the light illuminates him, he stops the action to point out the fire exits. He says, “In theaters over 1000 seats, it’s not necessary to mention such things.” He asks:  Why do only poor people need to know these things, are the poor too stupid to realize basic safety measures?   Solyony makes a remarkable villain.

“Kill the Debbie Downers!” expertly combines exciting song, dance, and live music. In the madness of the party, we comprehend that our present political/social system, too, occupies but a moment. How long will we go on in this fantasy?