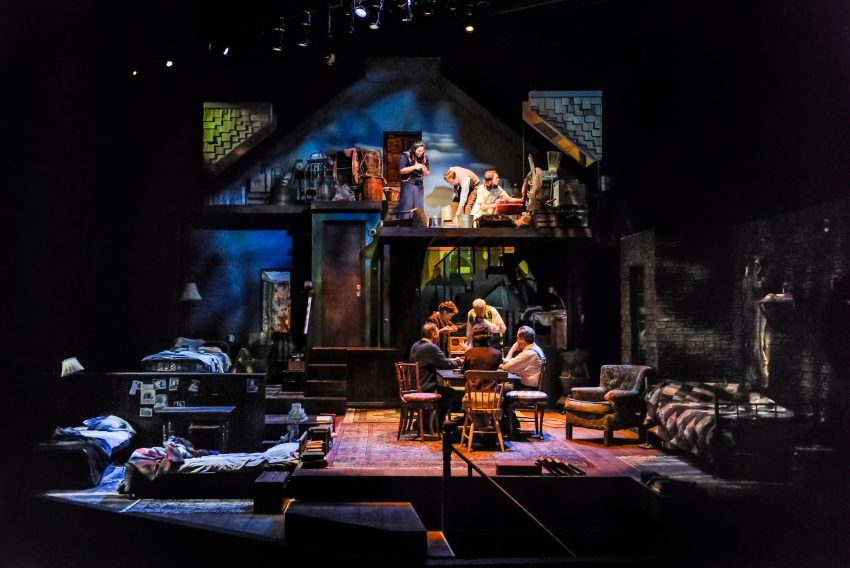 A family of four stands, clutching one other, in the bleak rain. The bewilderment at being marked “other” is reflected in their strained eyes and the garish yellow stars which loom on the breasts of their coats.

From its striking first image, “The Diary of Anne Frank” at Center REP, in Timothy Near’s deft hands, is a triumphant symphony of theatrical design. Detailing the years two Jewish families spend in hiding in close quarters in Nazi occupied Amsterdam 1942-44, through the iconic words of 13-year-old Anne, Center REP has executed a moving testament to hope in the face of fear, teeming with life and uncomfortably resonant with the rising political forces of today.

Notable are Kurt Landisman’s adroit lighting, and the evocative projection images and sophisticated sound design by Teddy Hulsker that usher us through the world of the play—both capturing the tense forces closing in on the Franks and taking us on a tender emotional journey. A gloriously intricate set by Nina Ball is crowded with daily life, if somehow still too spacious for the secret annex, and Jessie Amoroso’s costumes delicately color the wartime world.

Occasionally histrionic, Domenique Lozano’s Mrs. Van Daan is delightfully human as she recalls her first meeting with her husband (a prickly Michael Butler). Some of the most vital moments of the show lie in their interactions, which range deliciously from the sweet to the salty and back again.

Alison Quin blows in like a breath of fresh air each time she appears onstage with a refreshingly natural performance, figuring in the production much as Miep Gies must have in life to those she was hiding. Versatile up-and-comer Maya Michal Sherer, strives valiantly to contain a good-natured Margot rife with internal complexities.

While initially struggling with Anne’s irrepressible youth—lithe Monique Hafen Adams is a stretch as a 13-year-old girl—Adams is at her best in Act Two, soaring to great heights in moments of both haunting vulnerability and searing joy. Especially touching are the tentative moments of first love between clumsy Peter Van Daan (an earnest Kevin Singer) and breathless Anne, which blossoms in a world otherwise spiraling out of control and mark Singer’s strongest moments in the show.

A grounded yet potent performance from Marcia Pizzo as Edith Frank is especially evocative, and Victor Talmadge makes an affable, if unfortunately distant, Pim (Anne’s affectionate shorthand for her father). In Wendy Kesselman’s adaptation, the burden of the play’s true horror falls on Pim, and Talmadge’s epilogue could benefit from both a simpler and more gut-felt delivery.

If the actors sometimes struggle with the stilted language, or dip into moments of heavy-handedness or melodrama, it can be mostly overlooked. The production is crowned by Near’s attentive direction and the true glory of this “Anne Frank” lies in its detailing of the everyday. Near is master of poignant stage pictures, ranging from subtle gestures to a meticulously executed convention, suggested by the script, in which the annex is lived in by the actors throughout intermission—much to the initial bafflement of the house.

Most striking, is how is the diary of a 13-year-old girl is somehow still so startlingly prescient. As the final lights fade to black, all that remains is a projection of Anne’s diary glowing in the darkness. Beat by beat the pages gather, filling wall after wall, to the searing tones of a violin. The image calls to mind nothing so much as the wall of a Holocaust Museum or war memorial. But Near does not leave us with the names of the dead. It is Anne’s timeless words of life, even in the face of unspeakable horror, left ringing in our ears: “It’s utterly impossible to build my life on a foundation of fear…”