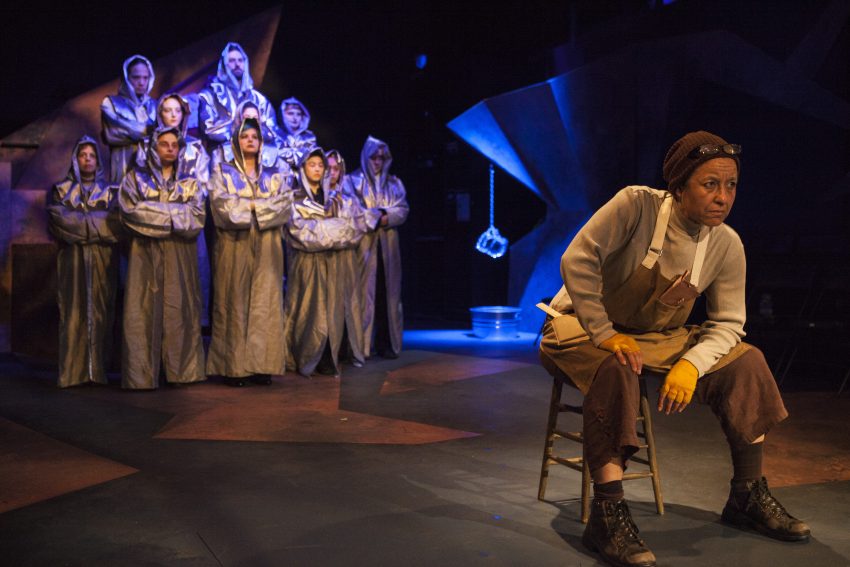 An iceless world with a city skyline that reaches the horizon . . . We’ve seen this prediction in every post-apocalyptic sci-fi story, from “Wall-E” to “Oblivion.” Ragged Wing Ensemble’s “Time Sensitive” conjures this dystopian vision with intense choreography and a wicked cadence.

A chorus of businessmen and women stand, arranged on stone risers. They recite stanzas invoking capitalist chaos: “Need something get something QUICK!” They each jab their arms outwards, urgently clenching their closed fists. The angles of their arms create a living sculpture. Ensemble-based moments like this match our smart-phone-driven Need for Speed, satisfying and fun to watch.

The tapping of melting ice underscores the first-world frenzy, as droplets hit the tin plates beneath several ice sculptures. The tennis court shaped stage is decorated with ghostly slabs of ice, designed by Carter Brooks. Some hang wrapped in metal chains, melting while bound.

The world of the show does not seem far away. The dystopian divide between the rectangular high-rise bankers and the cracked sidewalk street-dwellers opens wide. The divide is opening ever wider on the streets of San Francisco. The frantic pace of the show mirrors our manic typing and one-click-buying culture.

Standout performances include The Clockmaker (electric Simone Bloch) and the robot-assistant KID (perky Keith Davis). The entire cohesive cast shines as a unit.

The chorus chants beautiful hymns with dark circles under their eyes. All the while, we hear the tapping of the melting ice. Intense, poetic, and highly physical, this performance piece boasts symbolic critiques of capitalism. And the intense show illustrates our warped sensibility of Time.

“Time Sensitive” written and directed by Amy Sass, at The Flight Deck, Oakland, California, through Saturday, May 4, 2019. Info: raggedwing.org