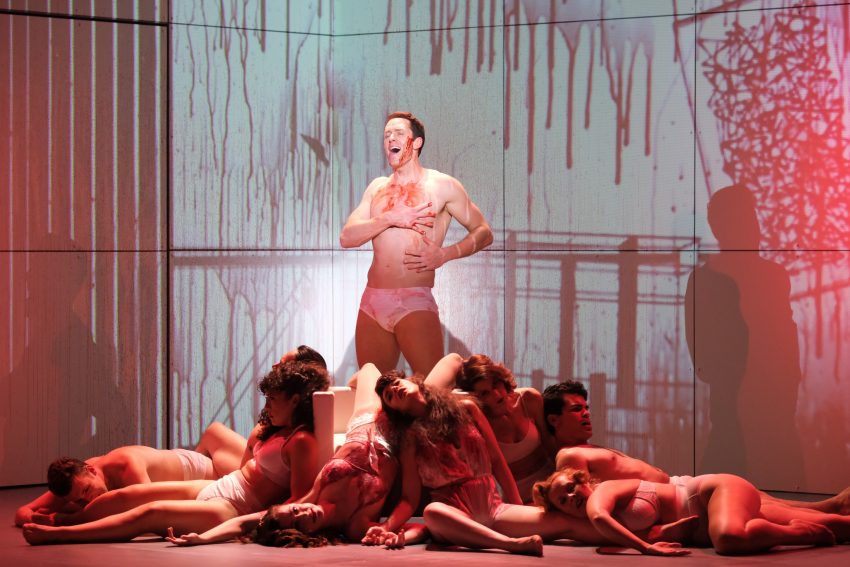 by Christine Okon, reprinted from Theater & Such

Obsession with winning at all costs.  The need to be the center of attention and alpha male at all times. Ruthless competitiveness that wrecks the lives of others. Solipsistic grandiosity. Dangerous. Does this guy sound familiar?

No, not that guy. But close.

From the start, Ray of Light Theatre’s production of “American Psycho: The Musical”  hurtles us into the late 1980’s MTV-frenzied world of 26-year-old Wall Street investment banker Patrick Bateman, where appearance trumps substance, greed is good, and one’s purpose in life is to crush the competition at all costs. Underneath his smooth and suave exterior lies a psychopath with bottomless blood-lust for getting what he wants and wanting what he can’t get. Like Showtime’s serial killer in Dexter, Patrick manages to hide the monster behind a human disguise.

And with this premise “American Psycho” takes us on a wild and darkly satirical ride through the world of Patrick Bateman.

Inspired by the 1991 novel by Bret Easton Ellis and 2000 film starring Christian Bale, “American Psycho: The Musical” premiered in London in 2013 and came to Broadway in 2016 where it closed after only 27 previews and 54 regular performances, although it captured two Tony Awards for the projection design and lighting which inspired this current production directed by Jason Hoover.

Ray of Light has done great justice to the sadly neglected music and lyrics by Duncan Sheik and book by Roberto Aguirre-Sacasa and gives the audience one hell of an aerobic workout to an incessant 80s dance beat and adrenaline rush of fear. From the exquisite, precise dancers who recreate the technology-infused 80s to the top-notch singing, this production is as good as it gets.

We are thrown into the world of “what it means to be Patrick Bateman” as he does the “Morning Routine” that keeps him in lean, mean fighting form. Kipp Glass is the perfect Patrick, a mix of sleek disdain, inordinate self-assureance, and designer-perfect looks.

In “Selling Out,” he revels in how easily he gets others to buy whatever he’s selling. His supreme egotism is captured in “Not a Common Man”: “There are gods, there are kings / I’m pretty sure I’m the same thing. / Beyond boundaries, beyond rules…” Kipp is a shark-like pro who easily swims from his cool exterior to an inner sadist.

Patrick sees himself as the biggest and only star in a universe where others are mere satellites; he is obsessed with looking good, and better than others, at all costs. In “You Are What You Wear,” the women prance around a party and flaunt their fashion choices: “I’m with Prada / I’m with Gucci / Missoni, Versace, / Which one is best? / The guys just buzz, / Do I look underdressed?”

As Patrick’s self-absorbed fiancee Evelyn, who sees marriage to Patrick as a another prize to acquire, Danielle Altizio brings a convincing and shimmering shallowness to the character. Evelyn’s opposite is Jean (Zoey Lytle), Patrick’s executive assistant who holds an innocent love for him, seeing substance where Evelyn sees style. Lytle sings “In the Air Tonight,” a moving and mournful solo; and the more we learn about Patrick, the more we fear for her.

Patrick’s male coworkers are equally obsessed with appearance, captured in “Cards” where the choice of font and paper for a business card, that immediate indicator of power and status, is critical because “The question isn’t what’s in a name, but what it’s printed on.”

When Patrick finds out that his rival Paul Owen (Kyle Ewalt) wins the prized Fisher account, and gets a reservation at the elite restaurant Dorsia, AND has a better looking business card, the inner monster flashes his teeth. Patrick invites Paul to his apartment before a party, and both men dance to “Hip to Be Square” by Huey Lewis and the News. Ewalt, all legs and arms, shows his moves like a Gumby-Michael Jackson machine. When Patrick raises their “cutthroat competition” to bloody Grand Guignol, we are shocked–just in time to take an intermission breather.

This “American Psycho” features superb choreography by Leslie Waggoner, costumes by Katie Dowe, and set design by Angrette McCloskey. The sound design by Jerry Girard, lighting by Weili Shi, and video projections by Erik Scanlon all show that Ray of Light is on its way to becoming even brighter. It’s an experience to die for.

“American Psycho: The Musical”—music & lyrics by Duncan Sheik, book by Roberto Aguirre-Sacasa, based on the novel by Bret Easton Ellis, by Ray of Light Theatre, at Victoria Theater, San Francisco, through Saturday, June 8, 2019. Info: rayoflighttheatre.org