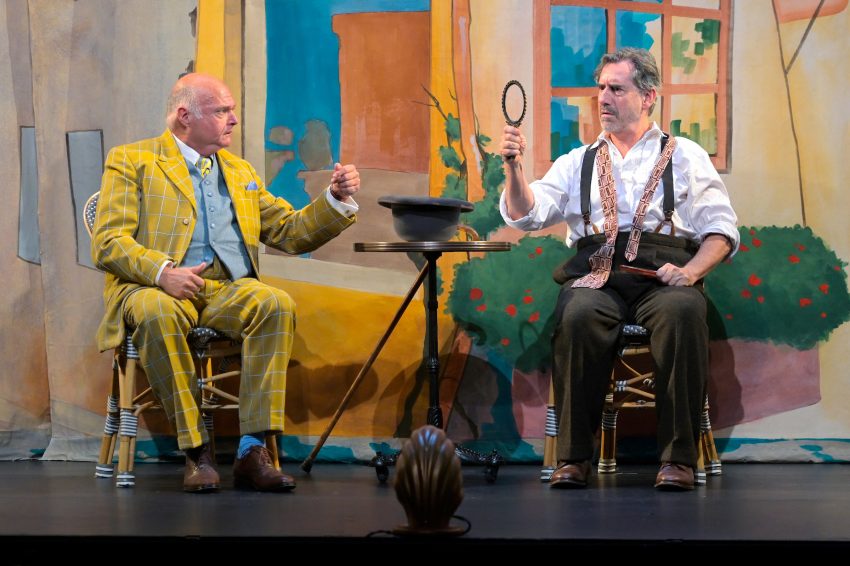 You can view Director Frank Galati’s streamlined version of Eugène Ionesco’s 1959 play “Rhinoceros” as a puzzle or a time-bomb. That bomb starts ticking in the first scene, in front of the lovely painted curtain of a small French village. Two friends drink wine and disagree about everything, but pretty soon reports of a rhinoceros in the streets trickle up to the cafe.

The two old “friends” start arguing about how to live your life. Self-concerned Gene (Matt DeCaro) is denouncing his sweet, anxious friend Berenger (David Breitbarth) using rough lingo. Why is this self-important guy abusing his melancholy friend?  It’s both hilarious and brutal. And Gene mocks Berenger for smelling rhino in the wind. Their assertion and denial make them a brilliantly comic odd couple.

They argue about reality—Berenger is a sensitive idealist, while we could call Gene a corporate man.  When Berenger tells him about the rhino in town, Gene accuses his buddy of drinking too much. The wonderfully cynical waiter Marcel (Goran Norquist) snickers. Gene, the practical businessman, rationalizes away the rhino!

Gene and Berenger are funnier than Seinfeld and Kramer: they also deny their privilege and have trouble with facts, while the world around them is turning dangerous. And then, neighbor Colette (surprised Lauren Spencer) discovers her pussycat, flattened.

When we visit Gene at his lavish, dungeon-like studio, we begin to understand that the threat comes from within, too. Matt De Caro pulls off one of the great human to animal transformations. He slides back and forth between man and rhino, brilliantly. As he takes off his shirt and squirms oddly in his skin, we can feel the flesh turning hard and grey-green. Bravo to Mr. DeCaro for a chilling and convincing rhino-transformation—horrific and beautiful. Now, we know that almost anyone can turn into the beast.

When long-suffering Berenger goes to his office, he finds unsympathetic colleagues. His tyrannical boss, Mr. Papillon (Butterfly), is played with arrogant disdain by elegant Danny Scheie.  Berenger’s co-workers scoff at him: first, the cynical Mr. Botard, and then, cool Mr. Dudard, both based on “dotard,” or “fool.”

In this wonderfully absurd and uproariously comic rendition, time is marked by transcendent Edith Piaf songs. Daisy sings, “Non, je ne regrette rien”—”No, I don’t regret anything.” But we quickly regret the passing of love and the arrival of brutality. It’s a magic trick of satire and fun only Ionesco and Director Galati can pull off.

The changes we see are frightening—fascism, demagoguery, lying, manipulation, and brute force. The Rhinos are at the gates—just look at your news-feed. You can see them rampaging.

Mrs. Boeuf (Beef), the divine Trish Mulholland, rushes to the office to tell Papillon that her husband has disappeared—so, he won’t come to work!  But it’s worse—he has turned into a raging rhino and is ripping up the stairs. Delightful Mulholland embodies a perfectly hysterical and hilarious wife, searching for truth. She’s a Hoot! What better critique of our devotion to work and denial of truths.

You will recognize many beasts in this pursuit—the denier, the liar, the boss, the clerk, and the woman with foresight. They all are turning into rhinos. Can Berenger, the sweet optimist, hold out? Better stampede over to ACT to relish the prophetic vision of where we are now, and where we are heading. Such a brilliant comic masterpiece as this “Rhinoceros” could possibly save us.