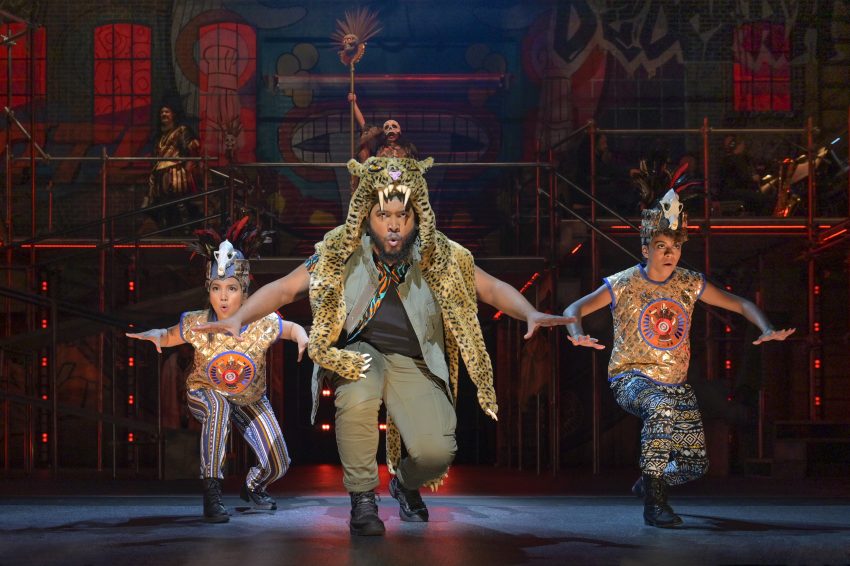 “Kiss my Aztec!” conjures up an ancient indigenous identity that lurks in all our DNA. As the cast sings at the end: “The World is Getting Browner!”  John Leguizamo and Tony Taccone transport us to a 16th Century fantasy world where an Aztec tribe made up of all flavors—from classic nougat to milk chocolate—plan a guerilla attack on the Spanish Viceroy’s citadel in Mexico City.

Latino culture stems from old and diverse peoples, who were raped and pillaged by Spain and Portugal, then joined by Africans through slavery. Led by El Jaguar Negro (flexible Chad Carstarphen), the Aztecs sport a blend of street styles and tribal designs, while they speaketh Elizabethan English every other sentence.  Spanish and Indigenous people use Spanglish and Spanish, cleverly blending imperial and colonial tongues. Sounds like today’s Island Pidgin, U.S.  Ebonics, Creole … you name it.

Like SpongeBob, performing artist Pepe annoys his tribe as he tries to live his best life. His creative mind makes him the odd man out of the attack on the Spanish. Unfortunately, Pepe’s character development stops, freezing him in a Disney universe. Many sub-plots make the show fascinating, including a surprise gay romance.

“Kiss My Aztec!” dodges pathos, keeping us hooked with energy and wit. Speaking of his buddy Taccone,  Leguizamo asserts, “I wanna reach in there and grab that Puerto Rican in him, and tell him that he’s okay.” They want to locate the Latin in us all. Although that’s tricky in a musical designed to please everyone, Leguizamo and Taccone’s magic enraptures the house, and we leave intoning: “The World Is Getting Browner!”

When the cast breaks out into “White Men on Boats,” Perez’s energy turns the dancing bodies into predatory Conquistador ships. Those boats are bringing destruction and genocide to Latin America.

Today, we still feel White Supremacy threatening, and it’s time to pray for protection! We won’t attack the citadels (well, maybe);  but we will buy from People of Color.  We will not play Oppression Olympics. We will remember our ancestors.

Let’s unshackle our history books.  “Kiss my Aztec!” signals the continuation of Leguizamo’s Latinx identity quest. The rollicking musical will inspire other Latin artists to dig for the stolen gold and the hidden truths.