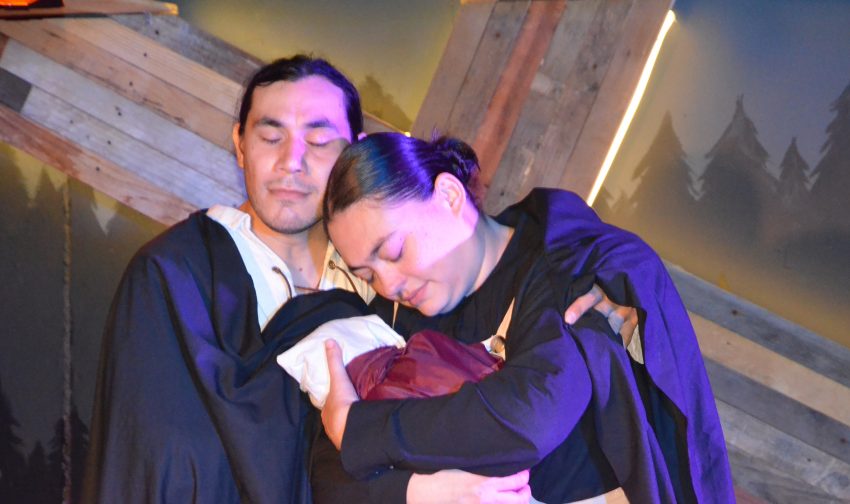 Those Women Productions, one of my favorites, is back at it again with their world premiere of Carol S. Lashof’s “Witch Hunt.” With reproductive justice rights under attack, Mother Earth in ruins, and the occult making a dramatic comeback among disillusioned millennials, there’s no better time to revisit our country’s colonial origins.

Lashof tells the story of Tituba, an indigenous serving woman in 17th century Salem, Massachusetts. Minister Samuel Parris purchased Tituba from a slave plantation in Barbados, and leaves her in charge of raising his unruly daughter Betty (Sofia Angelopoulos), who hangs on Tituba’s every word.

The question of how to tell an unrecorded story plagues artists and historians alike. At Salem’s notorious trials, Tituba was the first to confess to practicing witchcraft—but we know little else about her. In Arthur Miller’s classic “The Crucible,” she appears as a victim of the pilgrims’ manipulation, but Lashof portrays her as the master of her own fate.

Renee Rogoff embodies the enigmatic Tituba with a quiet dignity, shining light onto a formerly  obscure historical woman. The play begins with her chilling premonition: “What is a witch? A woman who makes things happen in ways that you cannot explain. Through the power of words, it may be . . . ” Rogoff’s mesmerizing stage presence and Lashof’s words combine powerfully, reminding us that there is no spell more enchanting than a work of art.

Despite the show’s outstanding qualities, I was disappointed to see Tituba’s narrative move out of focus. Her monologues offer precious insights into the life of an influential Native woman, but they are few. Instead, Tituba’s story is eclipsed by Betty’s, as Puritan paranoia takes center stage.

In emphasizing the familiar pilgrim hysteria, “Witch Hunt” misses an opportunity to dip beneath the maelstrom—and fully explore Tituba’s experience of events.

Whether or not Tituba believes she is a witch, we are awed by her ability to throw Salem into chaos by merely uttering a few words. Her eyes bright with vengeance, Tituba tells her god-fearing captors that she has indeed seen the Devil—and he is a white man.

This formative moment in U.S. history forces us to ask: Are we still suffering from delusions of superiority and imperialist arrogance? Why does the city of Berkeley—with its progressive reputation—refuse to return land to the indigenous Ohlone people?

With racism and patriarchy at the heart of so much evil, “Witch Hunt” challenges us to question our beliefs—alerting us to the dangers of repeating our gruesome past.