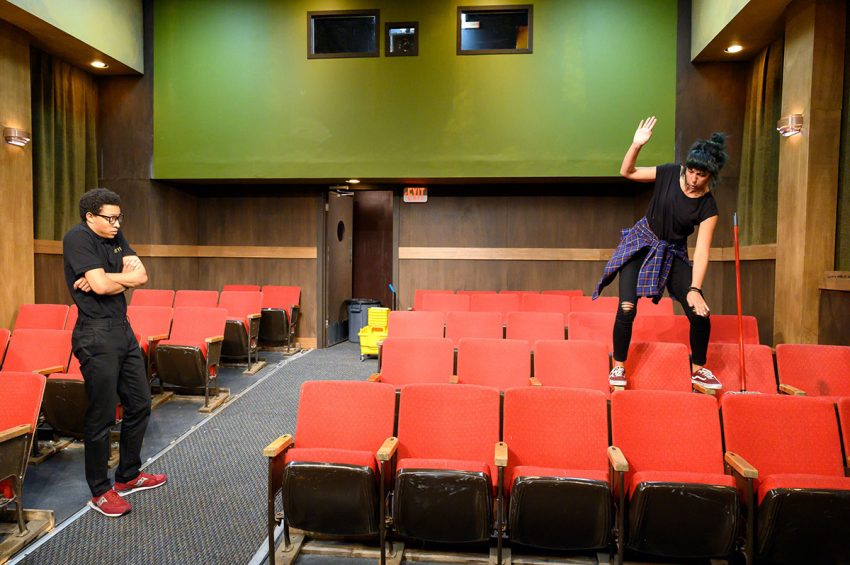 The stage set primes us for reality: We are faced by rows of old, dirty, empty movie theater seats, in a warped reflection of the bustling Ashby Stage. The drab walls are flushed in fluorescent light. An old-fashioned film projection booth looks down on us, an unsettling two-way experience.

The noticeably long scene builds tension from their slumped shoulders and clumsy conversations. Ginesi perfectly captures the insecurities of a 30-something man trying to establish authority, while telling his new college student co-worker how to clean the soda machines.

Their awkward chemistry breathes life into their menial tasks, justifying our voyeuristic surveillance. We lose ourselves in the grimy details, while we become invested in their relationships. Baker shows their tasks can be a comfort, a buffer from the outside world. Why worry about your finances or mental health when popcorn needs to be swept?

Avery, an avid cinephile, stands out from his co-workers. Incredibly smart, Howard’s Avery shows off his encyclopedic knowledge of films through hilarious rounds of “Six Degrees of Separation.” As the only black employee at “The Flick,” he tells Sam and the projectionist Rose (chaotic Ari Rampy) that the manager hesitated in hiring him, presumably because of his race. Although they quickly assure him the manager is not racist, Avery remains apprehensive. This bomb explodes later, in Avery’s brilliant monologue.

The best scene of the play, and the hardest to watch, shows Sam confessing his love for Rose. In a heart wrenching delivery, Sam confesses the depth of his love for Rose—unable to look her in the eyes. Ginesi draws out the pain of this scene. While Sam pathetically expresses his love, he meets our gaze rather than Rose’s, in a riveting confession.

One of the few scenes featuring obvious drama, it overflows with emotions that bubble under the surface in every sweep of their brooms. “The Flick” truly shines here: Baker takes her time pulling back the curtain on each character’s emotional scars. She reveals their self-doubt, insecurities, and even narcissism in a fantastically patient portraits of humanity facing mind-numbing labor.

I don’t need to tell you that “The Flick” is an amazing show. It won a Pulitzer in 2014. That should be enough. Baker plays on the idea of “nothing” in our daily lives and shows that a lot of “nothing” adds up into “something.” Shotgun’s production features an amazing illusion in its  realistic setting and brilliant performances. A must see!