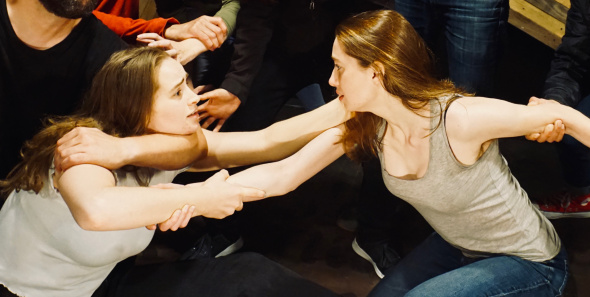 I have always avoided this play. It’s a horror show of grotesque, gory, and ghoulish murders, rapes, and tortures that take place in a fictional late Roman Empire. “Titus Andronicus” sports lots of ranting and raving and mainly, the ever-popular REVENGE, that drips with blood from every speech.

And yet, the play exudes an ominous charm. After all, the power of one man to sway the multitudes and exert his petty, personal selfishness over the entire people makes a pretty familiar story.

In “Titus Andronicus,” the brutal tyrant Saturninus (marvelous Michael Barr) has the power to accuse, imprison, kill, and torture his subjects—the Roman Empire in its dying days has given him that patriarchal primacy.  Yes, it’s Trumpism in all its dismal glory, no mistake. The Emperor even puts children in cages. Saturninus, I mean.

The ruling patriarch, his slimy, scheming family, and his sycophants break out in irrational passions, and practice smash/grab politics at every moment. That’s how Empires operate and then, fail—once they overreach their power. They create false enemies—like the press, and they scapegoat immigrants and minorities.  We are living in the end of an Empire, again. Shakespeare’s play proves it.

Director Tina Taylor has laid out for us exactly what it’s like to live in this Empire. She has worked out physical and ritualistic movements for the actors that express the extreme inequality we live in now, in the U.S. She presents indelible stage pictures that embody power, arrogance, and inequality.

The apotheosis of Trumpism parades the Theatre Lunatico stage, revealing all. As a swaggering Saturninus, the evil and selfish Roman Emperor, Barr triumphs with displays of cruel ambition. Barr indulges all the Trumpean meanness, pettiness, and greed you can imagine. His Emperor is only concerned with his power, his prestige, and killing his enemies. And he finds new enemies everyday—just like You Know Who–every day a new outrage.

On the tight little stage at La Val’s Subterranean Theater, we get to experience the full panoply of greed and murder, thanks to director Tina Taylor’s devilish interpretation of Aaron the Moor—played by  an enthusiastic and comic Bryce Smith.  Smith brings a lightness and humor to the rogue who secretly rises to undermine the tyrant’s rule. Smith brings humanity and wit to his unforgettable villain, who stands for all outcasts.

If you are looking for a striking and ritualistically choreographed reflection to our present horrible end-of-Empire politics, Shakespeare’s rough and ready early play recalls William Butler Yeats’ warning in his poem “Sailing to Byzantium”:

To keep a drowsy Emperor awake;
Or set upon a golden bough to sing
To lords and ladies of Byzantium
Of what is past, or passing, or to come.