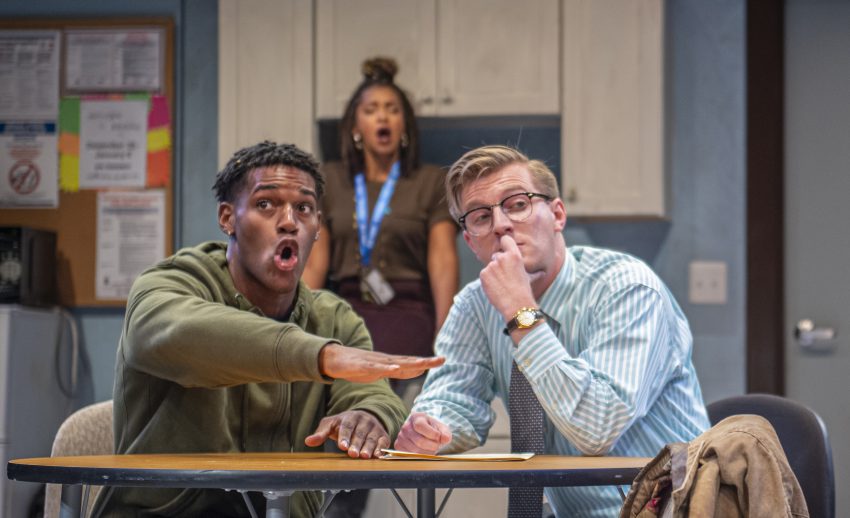 An “Exit Strategy” only becomes necessary when we are losing the battle. Ike Holter’s “Exit Strategy” demands that we answer a crucial question:  Why are we waging war against our own public-school system?

Ike Holter’s fast-paced script showcases six fiercely caring teachers, all heroes drawn from real-life. Provocative Margo Hall as angry Pam; salt-of-the-earth Michael J. Asberry as rule-driven Arnold; and mesmerizing Ed Gonzalez Moreno as insightful Luce—they all give humanity to Holter’s fiery words.  In the breakroom, the teachers express their passion. They speak about the calamitous case of Tumblydn High: Chicago refuses to fund or care for the inner-city students.

Moreno’s Luce reels off: “The kids are special, they are great—they are not gonna be fine—fine is for white kids, fine is for North Side kids.” Luce puts his own indelible stamp on the schools’ inherent unfairness, emphasizing his words with passion—a teacher we can believe in.

Playing Tumbldyn High School senior Donnie, Tre’Vonne Bell admirably represents the “kids.” Donnie’s sincerity and stubborn belief that he and the teachers can rally support to keep Tumbdlyn open keeps the teachers’ hopes alive–except for one.

And yet, funding for this public school has been meager for so long that Donnie and his fellow students are forced to ask for “three squares of toilet paper” from their teachers. That’s what passes for public education in poor U.S. schools today.

As a spirit, Pam transforms Arnold’s negativity with surprising humor and practical advice. She reminds him that they, too, had their days of idealism and struggle, and the new generation deserves their shot.

In one striking, encapsulating moment, the feisty Jania (charismatic Gabriella Fanuele) asserts to Donnie: “Fight, fight, fight, fight, and fight, but never, never beg.” One by one, these teachers come to life to battle the bulldozer that will destroy their school.

As Sadie (powerful Sam Jackson), a fearless teacher, rallies the troops, and, in true Berkeley fashion, they march out to “throw their bodies on the machine”—each one converted to bravery by the other. Even the whacky Vice-Principal Ricky, the only white guy, is recruited by Donnie’s strategies. As Ricky, Adam Niemann shows surprising physical and emotional flexibility, bringing broad humor into the mix.

Maybe his nerdy quirkiness is what endears him to boyfriend Luce, whose sympathy and love carry us far in “Exit Strategy.”

Director Josh Costello speaks to the urgency of “Exit Strategy,” saying, “This play takes place in Chicago, but school shutdowns are happening in Oakland right now—there’s teacher strike coming up in Berkeley right now.” As Holter’s play moves from comedy to character studies to social crisis, the teachers hope for a miracle. This production is a must-see.