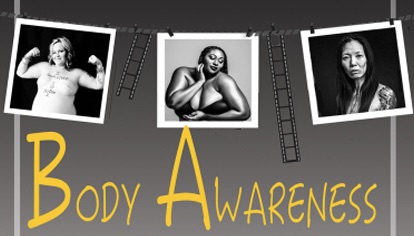 Psychological insecurity is the heart of Annie Baker’s “Body Awareness.” Despite being billed as a comedy, Directors John Shillington and Janine Sternlieb lovingly serve up a humorous, heart-warming tale that highlights the fragility of our relationships.

“Body Awareness” is a delicate dance of family members trying to deal with each other’s sensibilities, insecurities, and emotions, and mostly failing. Although this family misreads cues and botches intensely sensitive conversations, I am warmed by their earnest, yet clueless attempts to heal each other. I feel relieved to see that other folks can mismanage family crisis as much as I do.

In the small college town of Shirley,Vermont, Phyllis, an academic at Shirley State College, is hosting a conference called Body Awareness Week. The event is marked by daily guest speakers. Lydia Revelos plays Phyllis with exacting vulnerability, adding wit and humor. Revelos consciously sets the timing of the play by slowly writing out the name of each day on a chalkboard and adding her personal take on the morning’s announcements.

The simple, yet dexterous set serves both the front of the lecture hall, and a kitchen/bedroom combo. As usual, Elizabeth Craven’s clever set design and prop selection—from handmade quilt to frozen burrito—is flawless.

Phyllis lives with her lover Joyce, and Joyce’s awkward, socially inept, but intellectually bright son Jared (Elijah Pinkham). Jared is twenty-one, works at McDonald’s, and avoids college because, as he is constantly telling us, he’s “an autodidact!” His interest lies in etymology and he dreams of being a lexicographer, self-taught of course.

Since Jared displays symptoms of undiagnosed Asperger’s Syndrome, his mother gives him a book on it hoping he will self-diagnose! Her ridiculously soft approach backfires. Jared accuses her of calling him a “retard,”  threatening to kill her.

Nancy Prebilich’s Joyce, the other anchor of the show, brings a warm, welcoming presence. Prebilich lends Joyce authenticity, like a favorite, comfy sweater. Annie Baker’s unpretentious, honest dialog offers empathy for Joyce and all the others.

Just when life was difficult enough, enter Frank (Zachary Tendick), photographer and guest lecturer at Body Awareness Week, and the family’s house guest. Frank’s sole artistic focus is nude women, of any age. Frank, a large, tatted up white guy with a booming voice, is funny; and he brings a weird calming influence. To Phyllis, Frank is just another exploitive white male. But Joyce is oddly attracted to both the beauty of Frank’s art and risqué thoughts of posing for him.

Jared, who has never had sex, let alone a girlfriend, is strangely drawn to Frank, who has been married twice, and must know something about getting women into bed. Tendick creates a strangely adorable father figure, giving Jared disturbingly hilarious dating advice. Zachary Tendick’s Frank has substantial stage presence, but Tendick’s delivery is a bit stale. In the Playbill, I learn that this is Tendick’s first ever stage performance, so, his craft is still developing.

While Tendick’s performance remains formulaic, his Frank bring a powerful force that shakes up this little family. He helps to expose vulnerabilities and carve new paths to generosity. “Body Awareness,” a small and quiet play, rewards misguided, yet good intentions, and offers hope for change. I left the theater with a smile, feeling a little more positive about my own family drama.