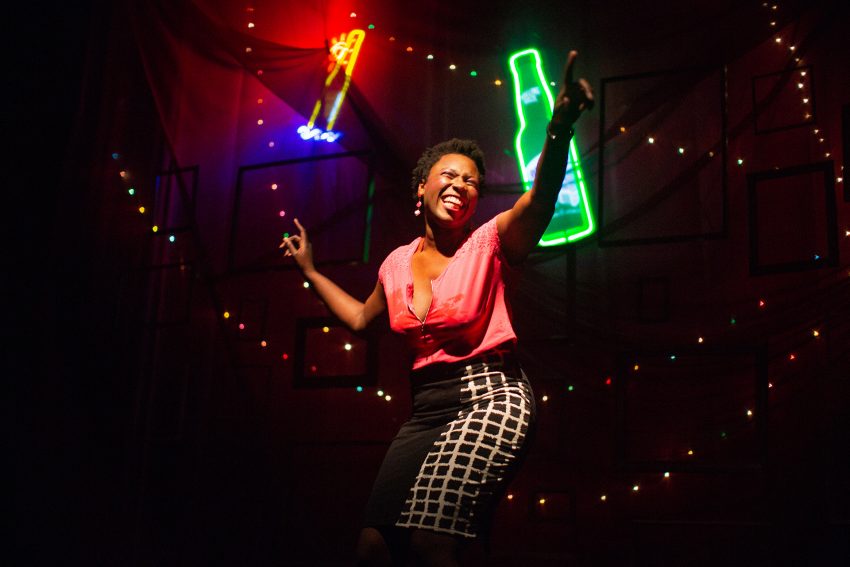 Focused on lesbian and queer community, “The Daughters” asks us to create new language for a new queer history.  Playwright Patricia Cotter splits our attention between the 1950s and 2015, telling the herstory of lesbian rights—moving from private to public space.

We witness the first meeting of the Daughters of Bilitis, in a private home in San Francisco. Then, 60 years later, we join the party at the last night of famed lesbian club, The Lexington, open to the public.

“The Daughters” holds us in a nostalgic queer hug. The power of queer relationships both in the 1950’s and 2000’s is palpable, using creative comedic dialogue to create community. In Act Two, Cotter captures San Francisco’s iconic lesbian bar—with a replica of its infamous bathroom, where women fall in and out of love. It’s a space for possibility and connection.

We watch as bartender Spike (Em Lee Reaves) woos a first timer to dance and then to the bathroom— emerging minutes later with a marriage proposal. Cotter reimagines nights at the Lex—with a comical glance, suggesting that we are all connected to queer history and to spaces like the Lexington Bar.

Cotter also attempts to criticize the experience of being othered within lesbian community, from 50s racism to present day trans-phobia. In Act One, the only character of color, Vivian (Jeunée Simon) asks, “Is this the Daughters of Bilitis or The Daughters of the American Revolution?” candidly pointing out the overwhelming whiteness of the movement.

Cotter illuminates inherent racism that lesbians of color battle in the 50s and still confront, today.

In Act Two, she takes on non-binary and transgender identity, addressing transphobia in lesbian spaces. She spotlights the urgent need for the queer rights movement to grow and change—in the light of new identities, language, and liberation movements.

However, “The Daughters” falls glaringly short in Vivian’s monologue, where a single woman of color islooking for love. Jeunée Simon, as Vivian, opens a window into her deep insecurities about being loveable, valued, seen, and safe. In her solo, third person speech, Vivian’s voice suddenly shifts, drawing us in: “She worried, would anyone want her?”

Cotter’s choice to write a woman of color’s part in third person distances us from Vivian, losing immediacy and intimacy with her character. But even through the veil of monologue, Jeunée Simon’s performance is powerful, clear, and crisp, engaging us in her experience of the world.

Cotter’s work sets the stage for further dialogue about belonging. We hope that her peek into what builds a community develops into a stronger capacity to address implicit bias, forging wider connections.  After all, women of color are taking up more space and more positions of power in our communities than a single monologue can represent.