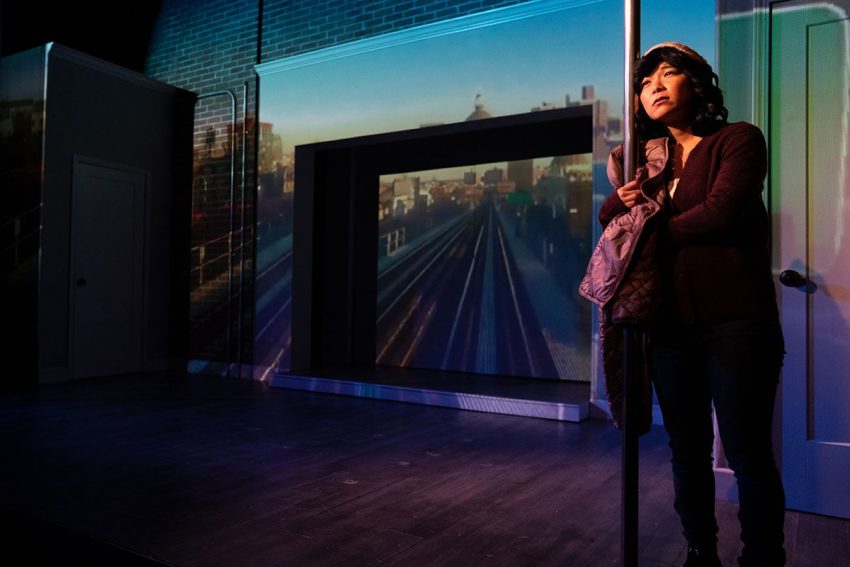 “Elevada” hits notes familiar to fans of 80s or 90s rom-com movies. An uptight young man meets a quirky young woman. They meet by chance, fall in love, and split up through a misunderstanding—we get it. But playwright Sheila Callaghan uses the formula to explore bigger issues, while reveling in rom-com corniness.

Callaghan ups the ante by attacking “corporate personhood,” a legal decision that grants the rights of an individual to a corporation. She  launches a stark and biting critique on the overbearing capitalist law that refuses to distinguish G.M. from George Miller—that guy down the street.

Infamous hacker Khalil, played with an intriguing blend of anxiety and charm by Wes Gabrillo, plans to sell his “personhood” to a multi-national as sacrificial resistance to U.S. capitalism. Khalil, a thorn in the side of corporations, uses his major hacking skills to infiltrate major websites, much like Anonymous.

The important thing is that Khalil will soon cease to exist in any meaningful way.

We meet Khalil  on his first date with  bubbly Ramona (brilliant Sango Tajima) in New York City. Ramona has terminal cancer and is hell-bent on taking control of her fragile life.  The date begins awkwardly—Khalil thinks the date is a consultation about shaping his brand image. But they connect over their limited lifetimes and deep isolation.  Their loneliness connects them.

They ice skate at Rockefeller Center, even though they both hate it; they buy a couch on a whim; use funny accents in cabs; and take dance lessons. The dance lessons lead to a hilarious scene involving stripper poles.

Released by nature and living in an in-between state, they exist in a modern purgatory where their fate is predetermined.  Ramona and Khalil run with it, living freely for the first time.

Each has  a crucial best friend.  Khalil has Owen (hilarious Soren Santos), a recovering drug addict and aspiring screenwriter. Ramona has her comically overbearing sister June (lively Karen Offereins), a swanky real estate agent.  Owen and June bring levity and love to “Elevada” when it needs it most.

Owen, your classic loveable fuck up, is instantly infatuated with straight-laced June, to her initial dismay. It’s a classic infatuation that works because Santos and Offereins anchor their romance with real vulnerability.

Powerful video projections rotate between New York restaurants, subway stations, and hospital waiting rooms. The witty projections simulate motion, as in the fantastic and somber scene where Ramona silently contemplates her prognosis in a subway car. Tajima’s facial control as she slips in and out of mania is thrilling.

Playwright Callaghan has fun with multiple dream sequences and transitions, while characters pause and the lights darken and the music changes. They float away from each other or break into dance.

The fantasy feels shocking in a mostly realistic comedy.  While Callaghan imbues the traditional rom-com with impending death and “corporate personhood,” she also uses fantasy and dreams to take us beyond Kahlil and Ramona’s story.

Although “Elevada” still suffers from dangling threads, I thoroughly enjoyed the unique voyage. Callaghan poses huge questions, like the validity of “corporate personhood,” but leaves them for us to ponder.

Callaghan enjoys her rom-com too much to dig even deeper into the big issues that make “Elevada” stand out. Her innovations and comic spirit make “Elevada” funny and moving, animated by great performances.