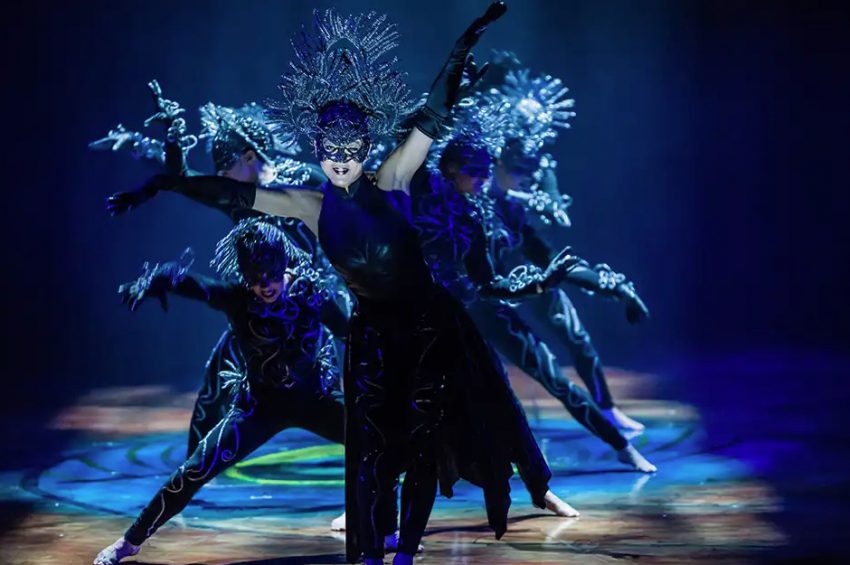 Acrobats and spectacular gymnasts from Japan, Brazil, Canada, Russia, UK, Australia, and U.S. come together in a swirling surreal fantasy to tell a tempestuous love story. Based on Shakespeare’s “Tempest,” Cirque du Soleil has created a remarkable vision of feminine magic and power.

One of the most striking scenes takes place in a giant water bowl where Russian acrobat Anna Ivaseva dances on the edge of the bowl after swimming and diving. As Miranda, the princess trapped on the island of Amaluna, Ivaseva creates touching dance moves and spectacular balancing on flimsy sticks, as she twists herself into lyrical shapes. How can she take so many shapes at impossible angles, yet she does it. Watching her, our hearts leap up.

As her newly landed lover on the shore of Amaluna, Belgian Danny Vrijsen plays Romeo, and the audience swoons when he takes off his flowing white shirt, revealing a gymnast’s build. Vrijsen performs spectacularly on the high Chinese Pole, twisting his athletic body so that he stands straight out from the pole. He performs astounding leaps and poses high over our heads. We look way up, into the dark reaches of the Big Top, and marvel as he dances in mid-air.

When the otherworldly Vrijsen suddenly releases his hold on the tall pole while in an upside-down position, plummets in a streak, down to the ground. Hold your breath—he magically stops inches above the floor, head-first. After that, who wouldn’t fall in love with this Romeo?

Another amazing scene features six beautifully athletic guys from four different countries. In a most amazing demonstration of Teeterboard leaping and flying high into the air, these young gents are propelled so high into the air over the giant see-saw, we cannot believe they will touch down, again.

Amazingly, each one in the handsome group lands on the spot, propelling the guy at the other end into the air. They launch each other into a breathtaking aerial ballet, catching, flying, jumping in glorious syncopation to the thrilling music. Bodies have never been so lithe, flexible, and graceful—it’s a ballet in the air.

What a variety of acts: there’s the team of Satomi and Yuka Sakaino from Japan, who ride golden unicycles like they were walking in the park. They bounce and fly and dance on the single wheelies in magical formations.

There’s Sabrina Againer from Canada who so beautifully descends and rises high into the air on the silver Aerial Hoop. She, too, defies gravity, and dances in the air, shaping her body to the circular hoop which serves as trapeze and dance partner for a magical performance.

All the while, the story of the shipwrecked Romeo and the innocent, marooned Miranda on the magical island rolls out before us in peacock colors and rainbow splendor. Surely, this heavenly display proves finally that women have more magic powers than men. Prospera who rules the island proves more graceful and powerful than any man.

To prove it, Lili Ciao from Switzerland does the unforgettable feat of picking up giant wooden palm fronds from the ground with her feet. She must be a goddess, too, because she weaves over a dozen long long wooden stems into a magnificent mobile balanced above her head, in one hand. The climax to her balancing act seems entirely impossible. Another dream-like act of beauty and grace.

There’s so much more—the time flies by, the designs are spectacular, and the flying, graceful bodies enchant us. They tell the story of an island where magic happens, where comedy rules, and where beauty triumphs. Time to see “Amaluna” at Cirque du Soleil, again—because it’s inspiring to see what humans can do. They surpass our dreams.