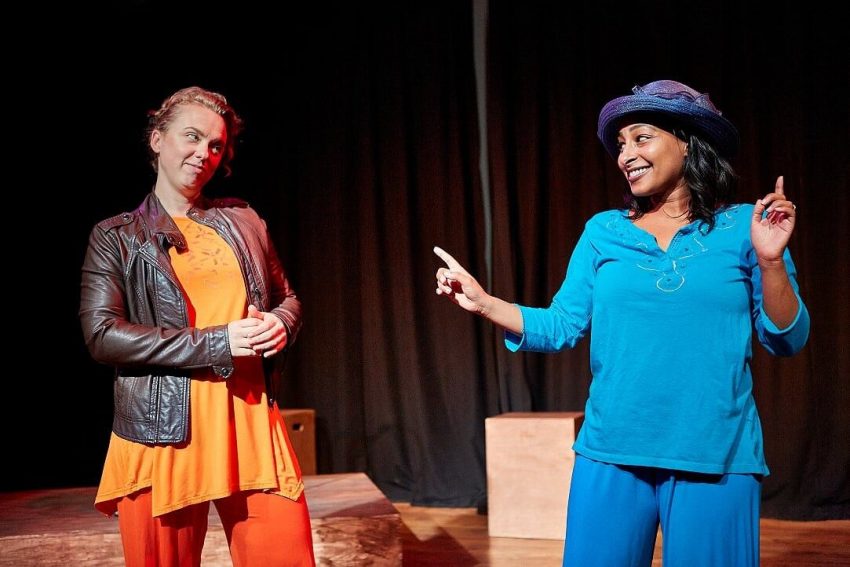 When we go to “A Midsummer Night’s Dream,” we always look forward to seeing an old friend.  We are eager to find out how “Midsummer” has been changed—updated, modernized, revived.

Director William J. Brown has achieved new heights of clarity and comedy with minimal sets and props and only six actors. Each of the six excellent actors plays three roles—crossing genders, types, and social classes.

Expressive John R. Lewis plays a sensual, royal Theseus, an impish Puck, and the deprived worker Starveling— without missing a beat.  Lewis does as well as a king, a fairy, or a common “mechanical.” This Midsummer engages the humanity that breathes across all peoples, and even Moonlight!

Lindsey Marie Schmeltzer employs a pair of sunglasses, a leather coat, and whether she stands left or right of Hermia to change roles from Demetrius to Lysander in the same conversation. Cast members make their role changes so smoothly that we accept them without question or confusion. They refresh our appreciation of humankind.

The competition between Demetrius and Lysander for the beauteous Hermia (ebullient Maeron Yeshiwas) amplifies the duality of their roles and minimizes their differences. The result of all this shape shifting focuses us on Shakespeare’s incomparable words, rather than costumes. Brown’s use of multiple roles for each actor emphasize the wonderful variety in each of us.

These unexpected coupling and tripling create a kaleidoscope of types, blending gender and class. Director Brown demonstrates that we each “contain multitudes.” He gets us to listen to their dialogue freshly, with new colors for each role. Brown creates a deeper appreciation for Shakespeare’s insights into the human condition. I find myself seeing new “democratic vistas” in Shakespeare’s play!

As Puck, Lewis’ facial gestures invite us to join his mischievous mistakes. In his bright red, skin-tight outfit, his only prop an outlandish codpiece, Puck delivers a striking final rationale:

If we shadows have offended,
That you have but slumbered here
While these visions did appear.
And this weak and idle theme,
No more yielding but a dream,
Gentles, do not reprehend. (V.i.)

Director Brown deserves high praise for inspiring his skilled cast into transfusing new life into “A Midsummer Night’s Dream”—taking us on a whole new ride. A “Midsummer” that surpasses reality, giving us dreams to pursue.