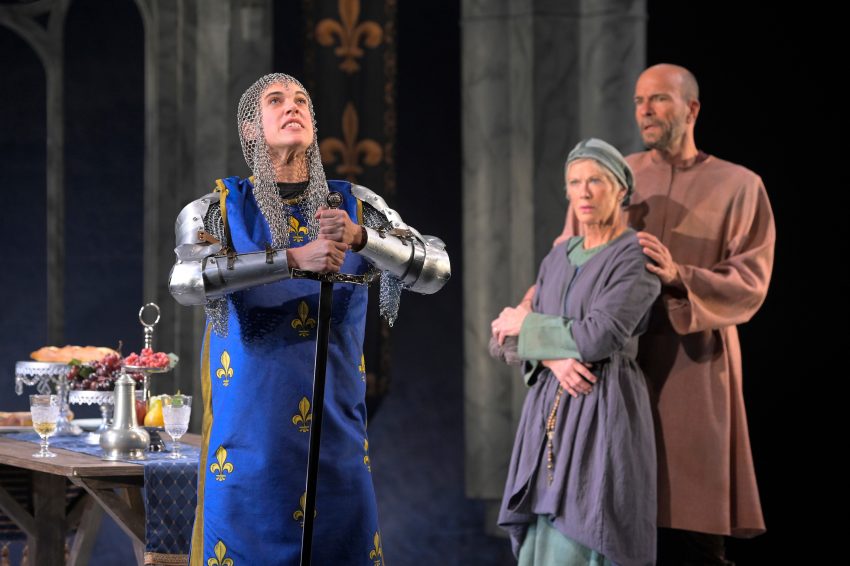 Feisty Isabelle Arc (powerful Sherman Fracher) begins her torture when her impulsive teen-age daughter Joan (riveting Rosie Hallett) claims to have spoken with  Saint Catherine. At a testy age, Joan announces that she will fight the invading English army, saying, “I am not afraid … I was born to do this.”

How do you support a child who appears ‘abnormal,’ who stands out in ways you don’t understand?  “Mother of the Maid” at Marin Theatre Company unfolds the Joan of Arc story in the voice and frustrations of her doubting mother, Isabelle.

Set in the Middle Ages, “Mother of the Maid” boasts two breathtaking sets designed by Sean Fanning. For Act One, Fanning constructs a rustic, skeletal wooden structure for the Arcs’ gritty peasant home.

In Act Two, spectacular floor-to-ceiling white marble columns immersing us in a medieval French cathedral. Magnificent floating Gothic windows are pierced by rays of light and soft fog.  The stunningly realistic arches take us back to the Vatican, and its magic.

Anderson makes us question reliance on religious and political leaders. Religion and politics are so closely aligned that the French king refuses to ransom his own savior!  We suffer with Isabelle as her beliefs in Church and King are shattered.

Anderson tackles the One Percent, too. After Joan’s capture, Isabelle walks 300 miles and meets the silky Lady of the Court (dynamic, angelic Liz Sklar). The two women discuss their children—like mothers in a school yard. But Isabelle wears dull green peasant rags; while The Lady dazzles in picture-book gowns of livid red and blue silk.

But, the primitive equality of mothers momentarily eclipses their wildly contrasting status.

We feel Isabelle’s angst as she walks those 300 miles. Neither storm nor robbery deter her from seeing Joan. The three Arcs are sucked into Joan’s historic whirlwind. The potent love of parent for child, mother for daughter, surpasses war and torture.

“Mother of the Maid” resonates with the tyranny and suppression around us, today. Director Jasson Minadakis affirms our feelings about the perseverance of family and love. Motherhood is the hero of Joan’s martyrdom.