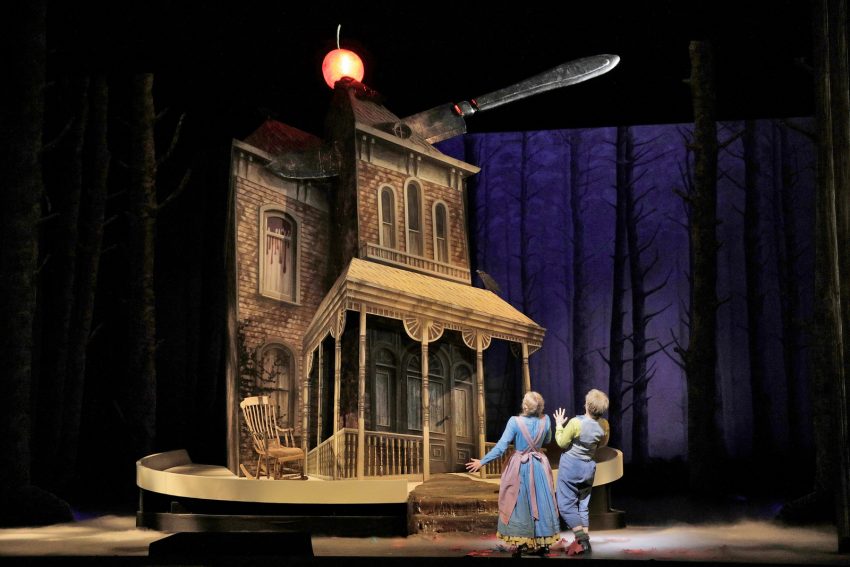 Impeachment hearings, random shootings, widespread fires, long power outages—no wonder we crave a gentle respite. Who would think it would be “Hansel & Gretel,” from a Grimm Brothers tale about lost, abused children and a flesh-loving witch?

Yet this clever, engaging version of Englebert Humperdink’s 1893 opera is more charming than scary. When the children spend a night in the haunted forest, they’re watched over by Snow White, Red Riding Hood (who feeds the poison apple to the Wolf), Rapunzel, Cinderella and her Prince, and other fairy tale characters, highlighting this production’s soothing storybook touch. What a treat!

The English-language co-production, with London’s Royal Opera House, captivates from beginning to happy end. As Christopher Franklin leads the S.F. Opera orchestra in the overture, we see a curtain painted with a cabin in a little valley. When it’s suddenly lit from behind, we move into that cabin, where a loving mother (mezzo-soprano Michaela Martens) is serving big portions of food to her family.

The scene goes dark, the hands on the cuckoo clock above the scrim turn and turn, and the next time we see them, the children are hungry and the mother and father (bass-baritone Alfred Walker) are now in despair. That’s why the mother sends Hansel and Gretel into the forest. She doesn’t want to lose them there; she just wants them to find some strawberries.

In the November 17 matinee, soprano Mary Evelyn Hangley stepped in, on less than four hours’ notice, to replace Martens. Like the rest of the cast, she was excellent.

In addition to their strong, assured singing, the leads—mezzo-soprano Sasha Cooke as Hansel and soprano Heidi Stober as Gretel—are wonderfully convincing as children. With every move and gesture, Cooke embodies a stocky, cocky preteen boy, and Stober, a lively little girl. They even show a brother and sister’s rapport.

Antony McDonald’s physical direction of the actors is first-rate, and extra props to McDonald for his cool set design. His Witch’s house is modeled on the Bates Hotel, in Psycho, topped with whipped cream and a glowing cherry, with a huge kitchen knife sticking out the side.

As the Witch, tenor Robert Brubaker is both humorous and villainous; if he had a mustache, he’d be twirling it. His Witch doesn’t wind up in a blazing oven, but in a vat of chocolate—a less gruesome, more fanciful end.

This “Hansel & Gretel” is active, entertaining, and short enough (less than two and a half hours, including an intermission) to delight the children while dazzling—and soothing—their parents. Maybe, like White Christmas, Nutcracker, and Messiah, it should become a holiday tradition.