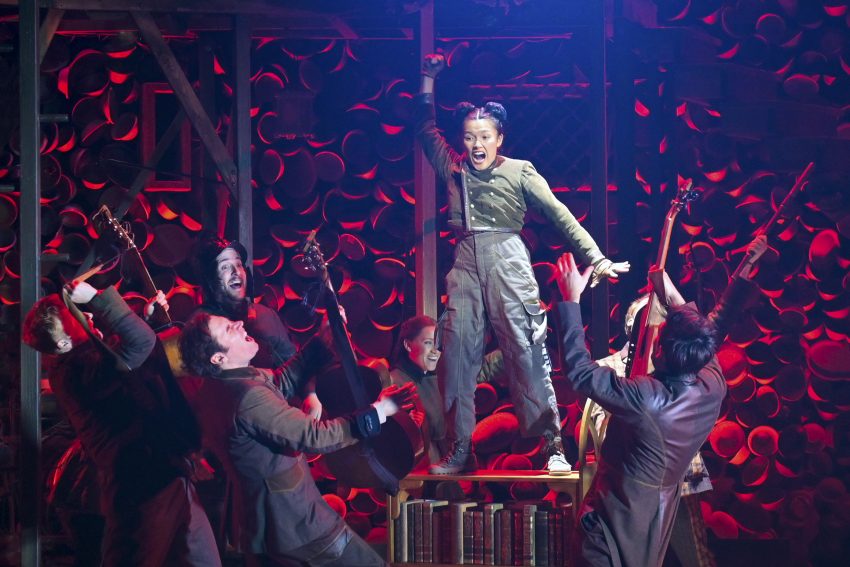 PigPen Theatre Co. dazzles us with spectacular technical wonders in their heartwarming musical adaption of Katie Dicamillo’s children’s book The Tale of Despereaux. The musical opens on the fateful day the Queen of Dor perishes from a heart attack caused by a rat and a bowl of soup.

That day ends the peaceful coexistence of royalty and rat.

The King banishes all rodents, leaving our heroic mouse Despereaux Tilling (electrifying Dorcas Leung) to find harmony in this artifical divide.  Despereaux lives in a world where rodents are sentenced to death and even soup is banned. They are at the mercy of a madman. Enter the mouse version of Greta Thunberg.

Little Despereaux fails at stealing crumbs or hiding like his siblings. Leung excels by bringing a spark that lights up the stage. She takes Despereaux from under-mouse to the Kingdom of Dor’s savior.

Brave little Despereaux restores the bond between mice and men with the help of some unlikely but fabulous friends. The human Princess Pea (mesmerizing Yasmeen Sulieman), the misunderstood rat Chiaroscuro (versatile John Rapson), and the Cockney maid Miggery Sow (powerhouse Betsy Morgan) all aid the mouse on his quest for compassion.

Despereaux unites these figures at odds to heal the Kingdom of its prejudices. Poignantly, the diverse group sings “With a Needle in Thread” and “Back to the Light,” highlighting their common lives. Human and rat, princess and servant, plead together for each other’s forgiveness and understanding. These tender moments remind us of valuable childhood lessons and their importance to us, now.

Designers Lydia Fine and Nick Lehane rivet our attention with their beautiful shadow puppetry. In the opening, they draw our eyes to actors holding a cloth, where they make shadows of the day of terror. They flash images of the rat Chiaroscuro venturing into the palace dining room and falling dramatically into the queen’s dinner.

The ensemble accompanies him on banjos, guitars, and drums, adding vibrancy to this swashbuckling song. They form a wonderful boat with their instruments, using their guitars as oars, as Weschler sings about a sea voyage. We are hypnotized by the child-like ingenuity of the brilliant staging.

Director Marc Bruni blends delightful lighting, staging, music, and a show-stopping cast to fill Berkeley Rep’s stage with one thrill after another. “Despereaux” awakens all our senses. PigPen Theatre champions the common mouse by appealing to adults and kids of all ages. A fitting reminder of the power of the single mouse in the Age of Greta Thunberg!